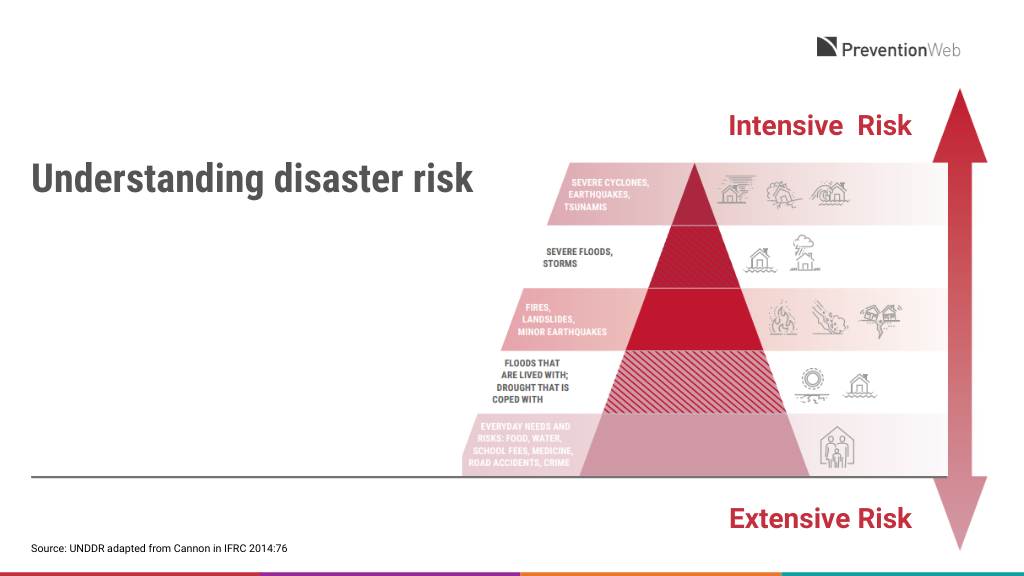 What is intensive risk?

Intensive disaster risk refers to the risk associated with high-severity, mid to low-frequency disasters. A major hazard can be thought of as a global or regionally large event such as earthquakes, tsunamis, large volcanic eruptions, flooding in large river basins or tropical cyclones.

Intensive risk is comprised of the exposure of large concentrations of people and economic activities to intense hazard events, which can lead to potentially catastrophic disaster impacts involving high mortality and asset loss. Although much as been done to reduce the mortality to some major hazards (e.g. tropical cyclones), intensive risk is growing owing to the increasing concentration of vulnerable people and assets in major hazard areas. For particularly extreme events, for instance in the case of tsunamis, the degree of disaster risk is conditioned more by exposure than by vulnerability. Intensive risk is therefore not only characterized by intense hazards, but also by the underlying risk drivers or vulnerability factors such as poverty and inequality.

What is extensive risk?

Extensive risk refers to the risk associated with low severity, high-frequency (persistent) events, mainly but not exclusively associated with highly localized hazards, including flash floods, storms, fires and agricultural and water-related drought. As such, extensive risk is normally associated with weather-related hazards; however, they can be associated with other hazards, for instance the persistent impact of volcanic ash on the island of Montserrat since 1995 (see Sword-Daniels, 2011). These small but frequent disasters occur in both urban and rural settings, particularly in low and middle-income countries.

Unlike intensive risk, extensive risk is less closely associated with earthquake fault lines and cyclone tracks and more so with underlying risk drivers, such as inequality and poverty, which drive the hazard, exposure and vulnerability.

Why does extensive risk matter?

Although the impact of intense (or large) events can be severe and losses high, increasing evidence suggests that the accumulated losses from small and recurrent events are significant. Although losses from small and recurrent events is estimated to cause only 14% of total mortality, it is responsible for 42% or more of total economic losses in low and middle-income countries. Extensive risk is also associated with a far greater significant proportion of morbidity and displacement (Figure), both of which feed directly into poverty. Furthermore, recent evidence suggests that mortality and economic losses associated with extensive risk are trending upward in low and middle-income countries.

Extensive risk can be a particular burden for the low-income households, communities, small businesses and national governments, thus inhibiting economic growth and increasing poverty and undermining development outcomes. The losses from small and recurrent events are not covered by insurance and yet they can amount to more than 10% or more of annual capital formation and indirect losses are rarely accounted for. 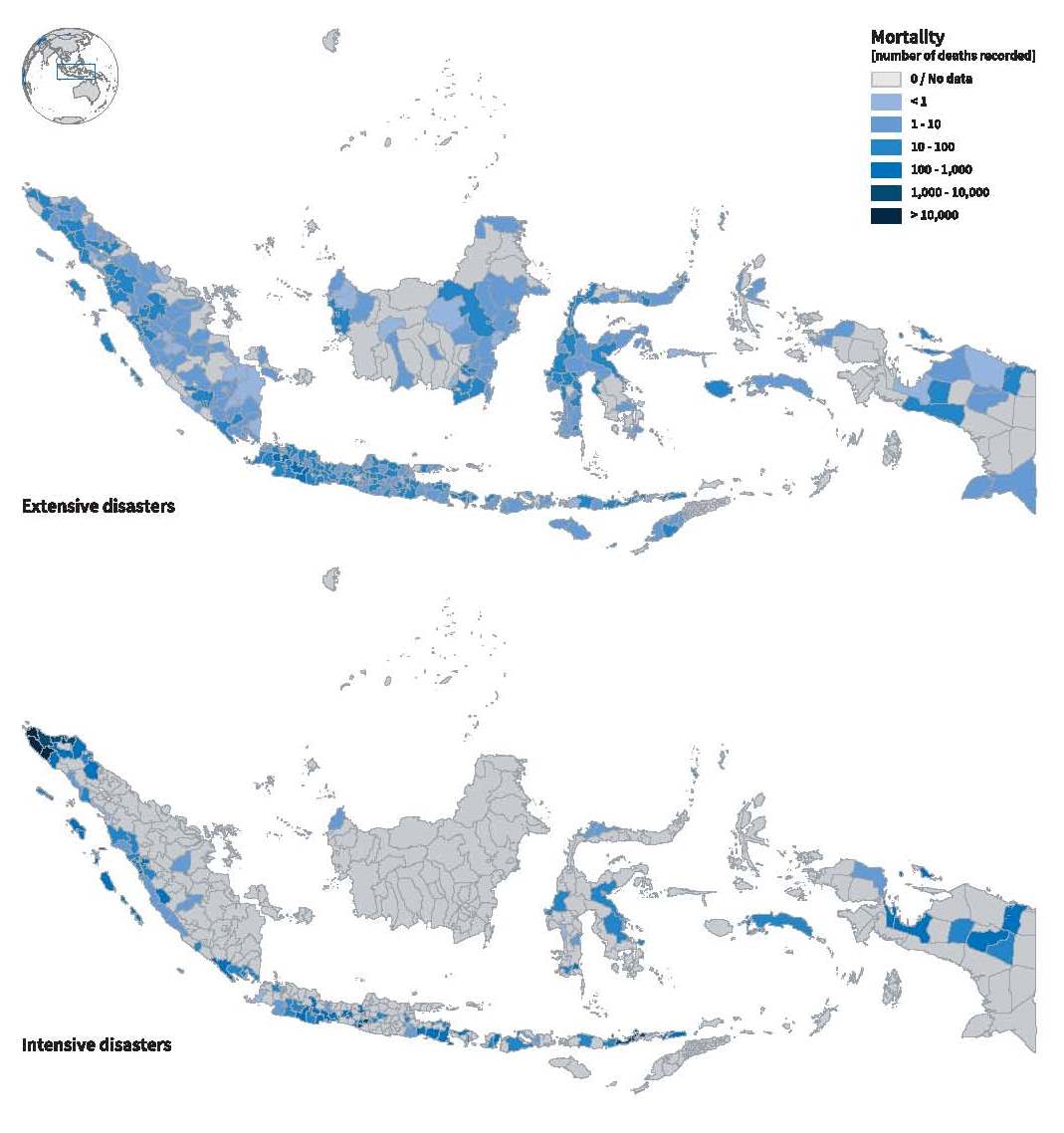 The different footprints of extensive vs intensive disaster loss in Indonesia, 1990-2013

© UNISDR with data from Indonesian national loss database (UNISDR, 2015a)

How do we measure intensive and extensive risk?

Losses from intense events are usually assessed and reported. In contrast, the cost of losses from small and recurrent events is usually not accounted for. These losses are absorbed by the people affected, attributing to poverty in the process. Unless a country can calculate the cost of these losses, it is unlikely to be able to justify significant investments in disaster risk management in the national budget.

Determining the losses from frequent and infrequent events informs measures and activities for reducing, planning for and managing disaster risks. However, measuring losses alone are insufficient for reducing risk - we must also identify and address the factors that make people vulnerable and exposed to certain hazards in the first instance.

How do we reduce intensive and extensive risk?

By understanding and measuring ranges of risk, we can select appropriate risk reduction strategies to address exposure and vulnerability, and when possible, hazard. For instance, the risk associated with low intensity tropical cyclones is largely explained by vulnerability, whereas the risk associated with high intensity cyclones is heavily influenced by exposure. When it is not possible to avoid exposure to events, land use planning and location decisions must be accompanied by other structural or non-structural methods for preventing or mitigating risk.

Unlike intensive risk, extensive risk is less closely associated with earthquake fault lines and cyclone tracks than with inequality and poverty.

In many cases, the hazard, exposure and vulnerability are simultaneously constructed by the underlying risk drivers. For example, all of Panama’s municipal areas report extensive disaster losses even though the country lies south of the Caribbean hurricane belt and earthquakes are infrequent.

There are different underlying risk drivers that characterize risk, some of them are:

But precisely because risk is constructed through development-related drivers, it is both manageable and avoidable with appropriate investments in disaster risk reduction.

Although exposure increases over time, evidence suggests that wealthier, better-governed cities are better able to reduce their risk. It has been observed that by reducing risk, the potential losses of both frequent and infrequent events are reduced. Most high-income countries have made the regulatory quality and have made investments to significantly reduce the more extensive layers of disaster risk associated with losses over short return periods. In contrast, mortality and economic losses associated with extensive risk appear to be trending upwards in low and middle-income countries. In addition, the citizens of these countries enjoy high levels of social protection, including effective emergency services and health coverage, meaning that high-income countries account for less than 12% of internationally reported disaster mortality.

However, although investments in risk reduction and regulation have enabled a reduction of extensive risk, the value of assets in hazardprone areas has grown, generating an increase in intensive risk. For example, investing in risk reduction measures to protect a floodplain against a 1-in-20-year flood may encourage additional development on the floodplain in a way that actually increases the risks associated with a 1-in-200-year flood.

Intensive and extensive risk are reflected in the cost of different risk financing strategies. It is usually more cost effective for a governments to retain and reduce its more extensive risk than to insure against it. But it is normally more cost effective for a country to insure the more intensive and catastrophic risk – at least up to a certain limit – than to invest in reducing it. However recent disasters such as the Christchurch (New Zealand) earthquakes and Thailand flooding have forced the insurance market to reconsider how to price intensive risks. Beyond the limit of insurance, risks can only be transferred to capital markets or retained. This means that while insurance or other risk transfer options need to be part of a governments risk management strategy, they are only ever part of the solution. Governments need to invest in measures to reduce a considerable proportion of their average annual loss.

Scientists warn: Humanity does not have effective tools to resist the tsunami

"An international team of scientists from 20 countries identified 47 problems that hinder the successful prevention and elimination of the consequences of the tsunami."

"Fires sparked by people steadily increase across US, making fires more frequent over longer seasons, although smaller and less hot than those started by lightening."

‘Flash droughts’ can dry out soil in weeks. New research shows what they look like in Australia

"Droughts can occur simultaneously and may evolve from one type to another. They can last from months to decades, and can cover areas from a region to most of a continent."