Poverty is both a driver and consequence of disasters, and the processes that further disaster risk related poverty are permeated with inequality.

Socio-economic inequality is likely to continue to increase and with it disaster risk for those countries, communities, households and businesses that have only limited opportunities to manage their risks and strengthen their resilience. The geography of inequality expresses itself at all scales: between regions and countries, within countries and inside cities and localities. This is particularly clear with the relationship between the proportion of population below the international poverty line and the number of people affected by disasters. The figure below highlights the disparities between the region of Europe and North America and the subregion of sub-Saharan African in terms of the relationship between poverty and direct economic loss attributed to disasters in 2021. 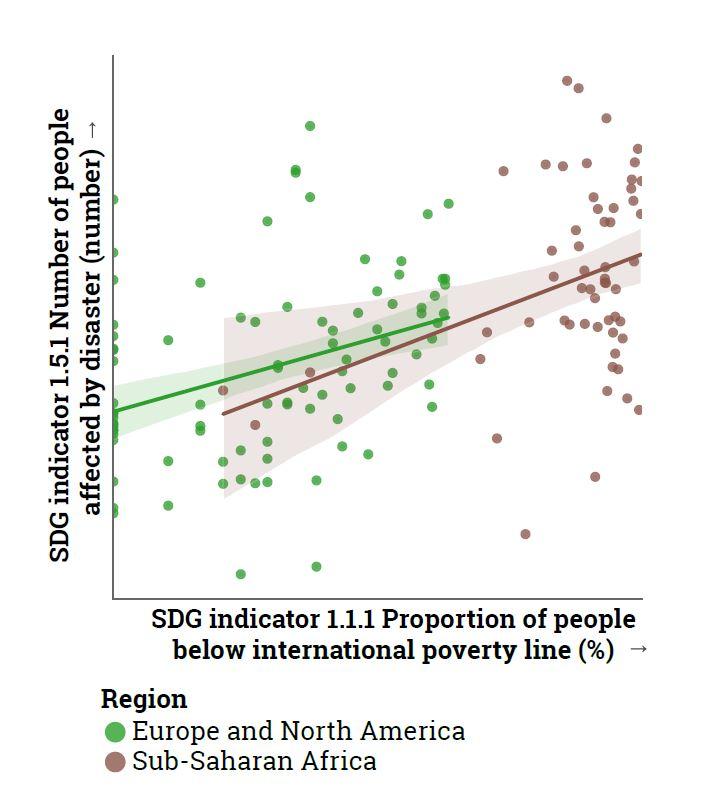 Vulnerability is not simply about poverty, but extensive research over the past 30 years has revealed that it is generally the poor who tend to suffer worst from disasters. Impoverished people are more likely to live in hazard-exposed areas and are less able to invest in risk-reducing measures. The lack of access to insurance and social protection means that people in poverty are often forced to use their already limited assets to buffer disaster losses, which drives them into further poverty. Poverty is therefore both a cause and consequence of disaster risk, particularly extensive risk, with drought being the hazard most closely associated with poverty. The impact of disasters on the poor can, in addition to loss of life, injury and damage, cause a total loss of livelihoods, displacement, poor health, food insecurity, among other consequences.

Climate change and exposure to natural hazards threaten to derail international efforts to eradicate poverty by 2030.

Research suggests that disasters cause impoverishment, which can lead to a cycle of losses, poverty traps and a slowing of efforts to reduce poverty. However, not every disaster leads to such negative long-term impacts and recovery can be relatively quick in some countries compared to others - with notable differences between and among different socio-economic groups.

During the pandemic and cost-of-living crisis years since 2020, $26 trillion (63 percent) of all new wealth was captured by the richest 1 percent, while $16 trillion (37 percent) went to the rest of the world put together.

While absolute losses tend to be higher amongst wealthier groups, the relative impact of disasters on low-income households is far greater. Take the example of Hurricane Harvey in 2017 - in Harris County, Texas, the per capita damages for a Latina/x/o person from climate change-attributed flooding were estimated at ~$1,035. Although this estimate is only narrowly higher than that for whites ($828), it should be noted that home values are higher in white neighborhoods. The illustration below, taken from this study, shows the proportion of different racial groups in each affected neighborhood under the scenario of where 27cm of flood depth is attributed to climate change. This illustrates that natural hazards boosted by climate change are and will be affecting disproportianetly less privileged neighorhoods.

Disaster risks in rural areas may be particularly invisible, given the low density of produced capital and declining population. Poor rural livelihoods are highly exposed and vulnerable to weather-related hazards and have a low resilience to loss because they have little or no surplus capacity to absorb crop or livestock income losses and to recover. Even a small loss might feedback into further poverty and future vulnerability.

Evacuation as a primary safety measure for any number of disaster types may sound simple enough, but research shows even that’s not always easy for poorer, disadvantaged people.

Recovery after disaster can extremely uneven within communities — especially in regards to housing and job markets — which can help compound pre-existing inequalities.

Poorer, more disadvantaged people are less likely to be able to afford household insurance, exposing them to even greater risk.

Poverty and disaster risk are also pervasive in urban areas. Generally, poor urban households derive most or all their income from work in the informal economy, meaning that precise figures on urban poverty are lacking. Housing is usually the principal economic asset of poor urban households, providing not only shelter and personal security, but also often their livelihood. Damage or loss to housing, together with essential domestic possessions, therefore, places enormous strain on household economies, given the high monetary cost of replacing lost assets, relative to low and irregular incomes, and the absence of insurance or safety nets. Urban poverty is now understood to have many additional dimensions - including 'voicelessness' and 'powerlessness', and inadequate provision of infrastructure and basic services. Most of the immediate causes of the deprivations associated with urban poverty are risk related.

Inequality is not just about the unequal distribution of income.

Disaster risk is shaped by a range of social and economic factors that determine entitlements and capabilities. Access to services, political voice, and social and economic status directly affect disaster risk and resilience. Key factors in underprivileged areas include low-quality and insecure housing, which in turn limits access to basic services such as health care, public transport, communications, and infrastructure such as water, sanitation, drainage and roads. Higher mortality and morbidity rates among children, the elderly and women are directly linked to these different poverty factors.

Inequality facilitates the transfer of disaster risks from those who benefit from risk taking to those who bear the cost, through ineffective accountability and increased corruption. Inequality is linked to other risk drivers, since it redistributes disaster risk through uneven economic development, segregated urban development, climate change and the overconsumption of resources. If inequality continues to rise, it may become a destabilising global force that manifests not only in increasing disaster risk but also in decreasing capacities to manage those risks.

Poverty and inequality drive vulnerability, but even the vulnerable have some capacities to cope with disasters. Strengthening these capacities, so long as they address needs and disaster risk in the long-term, and not simply the short-term, can enable communities to recover from disasters. By enhancing resilience, households and society can also prosper in the face of disasters, breaking the cycle of disasters creating and being driven by poverty.

Strengthening livelihoods and increasing resilience is therefore critical to reducing both disaster risk and poverty. In rural areas, livelihoods are particularly sensitive and vulnerable to weather fluctuations and extremes. The urban informal economy is growing, providing livelihoods for millions of people and with it environmental pressures - so how it evolves will be critical in transitioning to a more resilient economy. Building resilience in the urban informal economy is about working with and not against the urban poor, improving the formal regulatory systems and the operations of the informal economy.

Livelihood strengthening can have many dimensions, including:

Strengthening livelihoods is about building human, social, political, physical, financial and natural assets. Assets perform two key functions: (1) they build capacity through better access to resources, (e.g. education leading to a better paid job) and (2) they reduce vulnerability by acting as the buffer between people and hazards and other shocks and stresses. Access to the resources people need to build assets is hindered by inequality owing to gender, age, disability or ethnicity based discrimination and legal and illegal control of assets. For instance, women are more prevalent in the low and unpaid segments of the urban informal economy.

Households with more assets are less vulnerable because assets provide buffers against disaster loss. For instance, such households might have the opportunity to sell animals if a harvest fails. However, intensive disasters may destroy all assets, reducing the value of these asset buffers. Similarly, the coping strategies poor households may select (faced with scarcity) include overgrazing, deforestation or unsustainable extraction of water resources. While these provide food and income in the short-term, in the long-term these activities intensify hazards and drive disaster risk. When microfinance schemes and social protection are available, households are less likely to adopt damaging coping capacities.

Many countries have made substantial gains in poverty reduction and development goals, which have been linked with a reduction in disaster related mortality. Furthermore, during the Hyogo Framework for Action monitoring period (2005 to 2015), food and social welfare sectors have made considerable progress in addressing poverty and inequality - food security is improving in many regions, and social protection coverage is increasing. However, the ability to invest in social protection remains limited in many countries, with stark differences in the capacity of local governments to meet the needs of citizens.