Bangladesh: Living with the floods on floating houses 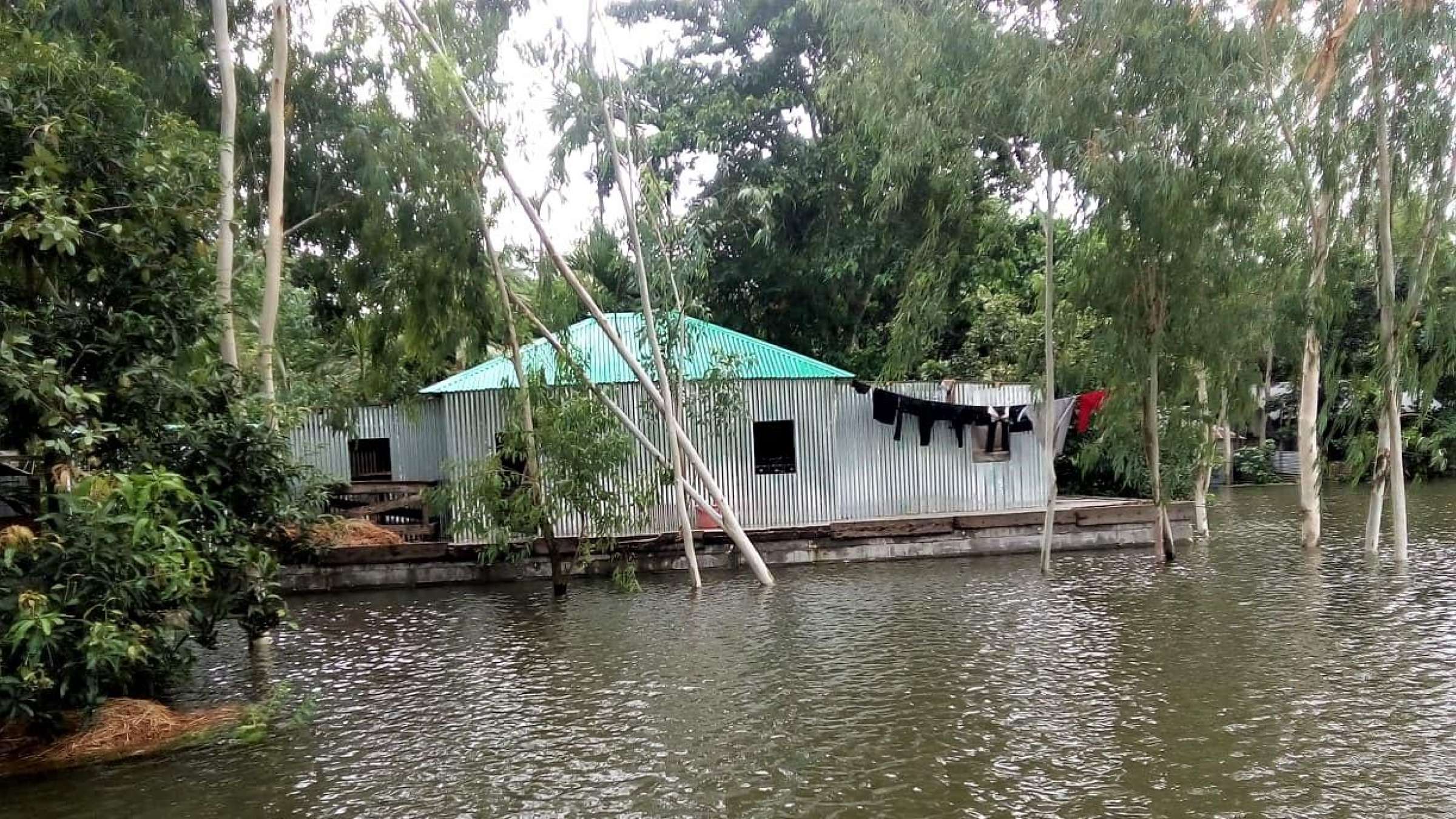 The CORE Bangladesh project aims to develop coordinating capabilities in flood-risk management for the urban/peri-urban poor in Bangladesh. It is lead by Bangladeshi and Dutch stakeholders and is composed of different components. In this interview, Professor M. Shah Alam Khan explains how the component of amphibious housing can help populations in Bangladesh cope with reoccurring floods.

Sirajganj is a historic city situated alongside the Jamuna or Brahmaputra river. Efforts to save the city from erosion are often discussed in the news.  Jamuna is a braided river which makes channel shifting very common. As a result, the river can get very violent, eroding its banks. In this context, a lot of flood protection measures have been taken to protect the city.

The main type of flood in the area is the river flood. However, there are other types of flooding such as embankment breaches or when the flood water finds its way into the flood plain. Most people living in the plain are poor and cannot afford to live on higher grounds. Consequently, they are the most vulnerable to floods. Since the city is mostly protected, we decided to put our focus on the most affected people living in the suburbs and peri-urban areas.

We observed two types of coping strategies among these communities. On the one hand, people who can afford to raise their house plinths above flood levels can protec their home from inundation. This allows them to stay in place when water rises. However, residents must go through the inconvenience of living in an elevated home year-round, even when there is no flood.

On the other hand, people living in regular housing must leave their home and find shelter on embankments whenever there is a flood. As a result, they lose their furniture and all the assets they cannot take with them. Moreover, lots of people use handlooms to weave clothes as a means of livelihood. Although they take their equipment with them to higher ground, they cannot continue their revenue-generating activity, thus losing their income.

The flood warning system in Bangladesh is centrally managed by a national agency. The main rivers, such as the Jamuna river, are well covered and monitored. Unfortunately, we lack a mechanism to extrapolate warnings in flood plains, mainly because of the geophysical characteristics of the area. The inflow and outflow of the flood water depend on the local context such as the width of the entry points or breaches, topography along the flood flow and obstructions posed by the infrastructure such as roads and culverts. Each area experiences a different flooding dynamic, so people rely on their experience and empirical knowledge to protect themselves. For instance, they use colored poles to measure the rising water level. It is in that local context that we propose the amphibious house design.

Photo: The local communities participated in the design and construction of the floodproofed houses. Local materials and skills were extensively used during the construction and retrofitting of houses. Source: CORE Bangladesh research team.

Before starting the project, we approached community members to make sure that the design was relevant to their context. They described their problem and we together explored some solutions. We understood that in the same area there are people who can afford a version of the house that is a little more expensive, with materials that are not sourced locally. Other people prefer a more affordable solution built with locally available materials such as discarded water bottles. In that case, the existing house would be retrofitted instead of being built from scratch. Most importantly, the community members participated in the construction process and acquired the ability to do this by themselves.

Our objective was to make affordable amphibious houses, inspired by relevant technology from the Netherlands. Recognizing that another practical problem is sanitation, we also proposed the construction of an amphibious sanitation unit that floats with the living quarters. Taking people’s livelihoods into consideration, we designed it in such a way that the structure can carry the load of handlooms allowing community members to continue their income-generating activities. As a result, and thanks to our design, people can stay in their houses and are not forced to move away from them, which could increase the risk of being robbed.

We called on the Polytechnic Institute in the area so they could learn with us, pick up this knowledge, and develop their skills. We organized a design competition and asked their students to consult with the community and come up with design solutions. We also initiated a collaboration between a Dutch and a Bangladeshi company to go into a joint venture and support the building of the more expensive version of the amphibious house. The floating base of this larger structure requires the import of specific materials as well as specialized skills. This was an opportunity for academia to work closely with business, which is an approach I have not often seen in Bangladesh.

Finally, since our intention, after all, was to create a pilot, we decided to engage with national-level actors to scale the initiative. We hope that the, Housing Ministry which also has programs for affordable housing, could see the benefit and further develop the project. A national agency, the Local Government Engineering Department, has already initiated a similar program and is currently preparing the budget to build ten such amphibious houses.

Learn more about the project.

Professor M. Shah Alam Khan is a coastal and urban water management expert with more than twenty years of experience in research and teaching along with a strong track record of developing, managing, and implementing consulting and capacity-building projects. He is a professor at Bangladesh University of Engineering and Technology and mostly works in water engineering and management, looking at holistic and integrated approaches for disaster risk reduction in floods.