Weak governance zones are investment environments in which public sector actors are unable or unwilling to assume their roles and responsibilities in protecting rights, providing basic services, public services, and ensuring that public sector management is efficient and effective. These “government failures” lead to broader failures in political, economic and civic institutions that are referred to as weak governance (OECD, 2006).

Weak governance is a driver of disaster risk, and is linked to many other risk drivers such as poverty and inequality, poorly planned urban development, and globalised economic development. To be most effective in reducing disaster risk, an integrated systems approach to governance, featuring strong coordination across sectors and a delegation of responsibilities to the local level is needed.

Governance refers to the different ways in which governments, the private sector and in general all individuals and institutions in a society organize themselves to manage their common affairs (UNDP, 2010 in UNISDR 2015).

Risk governance refers to the various ways in which many individuals and institutions – public and private – deal with risks surrounded by uncertainty, complexity and/or ambiguity (Hermans et al., 2012).

Disaster risk governance refers to the specific arrangements that societies put in place to manage their disaster risk (UNISDR, 2011a; UNDP, 2013a) within a broader context of risk governance (Renn, 2008 in UNISDR, 2015a). This reflects how risk is valued against a backdrop of broader social and economic concerns (Holley et al., 2011). For example, the fact that a country adopts and enforces a seismic building code is as much a reflection of the importance of safe buildings for economic development and social well-being as it is a safeguard against earthquake risk (UNISDR, 2015a).

Weakness in the way in which governments, the private sector, and public institutions perform their basic functions in a country are strongly correlated with deficiencies in development and disaster risk. Disaster risk is disproportionately concentrated in lower-income countries with weak governance (UNISDR, 2015a). In order to address disaster risk, not only do the underlying drivers of disaster risk need to be addressed to avoid risk generation and accumulation, but also the governance of disaster risk must be strengthened in order to be able to do so (UNISDR, 2015a). Disaster and climate risks in development need to be approached not solely through a specialized and stand-alone sector, but rather through strengthened governance arrangements across sectors and territories (UNISDR, 2015a).

Floods and poverty collide in Malawi 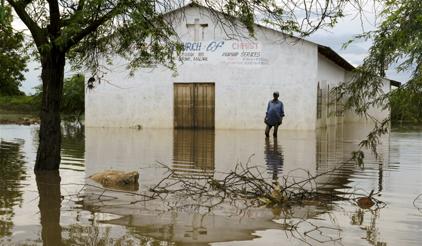 Floods in Malawi cause widespread devastation, compounded by the endemic poverty of the country.

In most countries existing risk governance arrangements are inappropriate - reforming them is fundamental to reducing disaster risk (UNISDR, 2011).

The strong political determination required by the HFA to promote and integrate disaster risk reduction into development programming has rarely been materialised (UNISDR, 2015a).

Priority for Action 1 of the HFA called for the integration of disaster risk reduction into poverty reduction and other development strategies on the basis of strong political determination by governments (UNISDR, 2015a). Unfortunately, many of these commitments in law and policy have not been translated into real priorities and investments (UNISDR, 2015a). The consequences of a past emphasis on disaster management, has meant weak connections between disaster management and development sectors with subsequent , lack of the political authority, governance arrangements and technical competencies to fully integrate DRM across sectors and institutions. (UNISDR, 2015a). Furthermore there has not been sufficient emphasis on the avoidance of creating new risks (UNISDR, 2005a).

Drought in the face of climate change in Viet Nam. © eltpics CC BY-NC 2.0

Drought risk management is neglected in Viet Nam, despite centralized responsibility within the national government.

As it links to almost every other risk driver, addressing weak risk governance is fundamental to addressing the other underlying drivers of risk.

The model of disaster risk governance proposed by the HFA was influenced by the approach adopted by Colombia in 1989 and subsequently by many other middle and low-income countries (with important variations). This model emphasized the adoption of regulation and other mechanisms to ensure compliance and provide incentives. The model also recommended specific budgetary allocations for disaster risk reduction, and it promoted the participation of volunteers and communities. At the same time, it stressed the importance of integrating disaster risk reduction into development policies, including poverty reduction, on the basis of strong political determination.

Colombia: National and local priority with a strong institutional basis for DRR

Colombia has integrated disaster risk management within its national development plan, including disaster risk reduction funds in their national budget.

The HFA model of disaster risk governance also stressed a horizontally and vertically integrated systems approach with strong coordination across sectors and a delegation of responsibilities to the local level. The need to engage communities in managing disaster risk is widely recognized as important, but need to go beyond consulting with communities to build meaningful partnerships between communities and their governments (Arnold and Cosmo, 2014). By tapping into the knowledge and skills of community actors, a community-driven development approach places less stress on government line agencies and at the same time is able to reach very large numbers of poor people (Arnold and Cosmo, 2014). Community-driven development programs have also provided effective disaster response and recovery support, and often evolve disaster risk reduction from a reactive to a more proactive risk management approach (Arnold and Cosmo, 2014).

Engaging with communities: Guatemala and Honduras

Collaboration between rural women's groupd with local and national authorities in Guatemala and Honduras has enabled scale up solutions for disaster risk reduction.

Tackling poverty and drought in Uganda Improving the utilization of arid land for food and livestock production, as well as focus on climate change mitigation via tree-planting and environmental protection. © UNISDR/Pius Loupa

A five-year initiative to tackle endemic poverty in Uganda’s northern region of Karamoja is expected to boost resilience to natural hazards, especially the recurrent droughts which can decimate livelihoods.

Countries will continue to require a dedicated and specialized disaster management sector to prepare for and respond to disasters (UNISDR, 2015b). However, disaster and climate risks in development need to be approached through strengthened governance arrangements in sectors and territories (UNISDR, 2015b). This strengthening requires a combination of disaster risk management activities that avoid the creation of new risks in investments - which remains a challenge for most (UNISDR, 2013) - along with the reduction of existing risks, and efforts to strengthen resilience at all levels (UNISDR, 2015b).

Incremental decentralisation accompanied by clear mandates, budgets and systems of subsidiarity, promotes ownership and improved risk governance at all levels (UNISDR, 2011). Local planning, financing and investment that build on civil society partnerships can enable the scaling up of community initiatives (UNISDR, 2011). Improved accountability mechanisms grounded in legislation and work processes, social audit processes, and a free press and active media contribute to improving the awareness of rights and obligations on all sides (UNISDR, 2011).

Risk governance structures and policies need to be expanded to include real consideration of the business sector and civil society (UNISDR, 2013).

The future of effectively integrated disaster risk reduction in national policies and planning will depend on governments and political leaders becoming more successful at combining the promotion of local and national economic growth with effective disaster risk management (UNISDR, 2013).