UK: Online game aims to save lives by educating children on how to identify storm surges

A Loughborough academic hopes the online game they have developed will help save lives by teaching children how to identify early warnings of coastal flooding.

Dr Emiliano Renzi, of the School of Science, has launched ‘Storm Force’ – a free, online, educational game, primarily for children aged 12 and above, which builds on half-a-decade of research.

In Europe, storms are the main reason for flooding at the coast, especially if they arrive at high tide.

The larger-than-usual sea levels that storms create – called ‘storm surges’ – can be several metres taller than ordinary waves, meaning they can crash over sea walls and defences.

Coastal flooding can cause extreme damage and also result in deaths – an example being Hurricane Katrina, which flooded New Orleans in August 2005 and killed more than 1,500 people.

Dr Renzi is a Lecturer in Applied Mathematics at Loughborough University and he has been conducting research into coastal flooding for the past five years.

His work in this area started when he was awarded an AXA Fellowship whilst at University College Dublin and he is currently studying meteorological tsunamis as part of a project funded by the Engineering and Physical Sciences Research Council (EPSRC).

Players take the role of an up-and-coming cadet with the fictional Storm Force – an organisation dedicated to researching storm surges to better prepare at-risk locations.

‌‌Each level, the players must battle against the clock to evacuate citizens from the waterfront whilst also collecting supplies and valuable data. 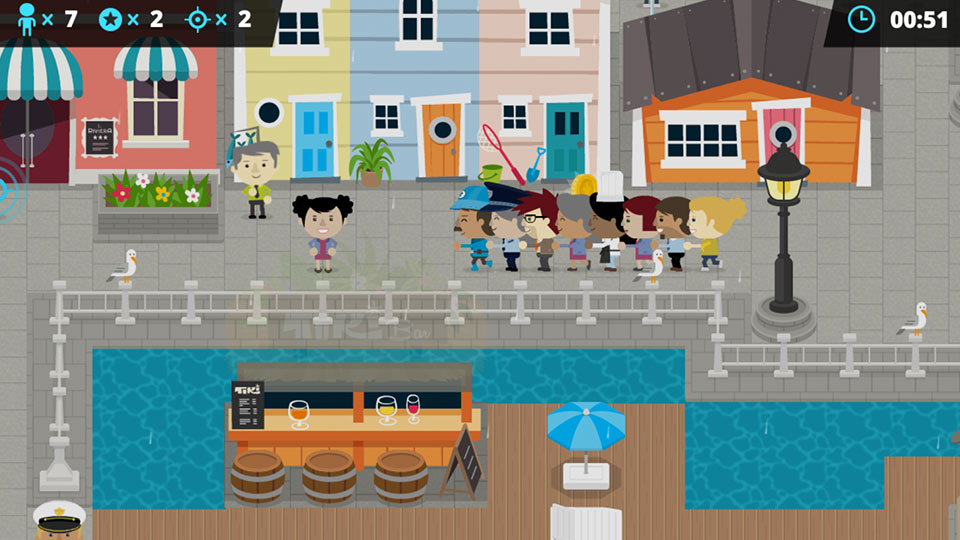 Topical information is scattered throughout the game, teaching players what causes coastal flooding, how to spot the warning signs and what they can do to save lives.

Storm Force also introduces players to underwater acoustic signals, which are generated by storms as they approach the coast.

The main objective of Dr Renzi’s research is to improve the capability of predicting coastal flooding by using such signals.

They travel much faster than storm surges so detecting and understanding them can provide more time to make necessary preparations and even evacuate communities.

Dr Renzi says playing Storm Force can be beneficial to children and adults – even those that live in land-locked locations.

He said: “Being able to spot the early warnings of coastal flooding is very useful, especially if you live by or go on holiday near the coast.

“By playing the game, players will be able to identify the mechanisms that create a storm surge and the risks associated with it.

“They will also be able to make an informed decision on whether to evacuate a beach if they see a thunderstorm far at sea.

“This will reduce the number of accidents involving unaware bathers being swept out to sea by storm surges.”

As well as teaching players about coastal flooding, Storm Force stresses that it is everyone’s responsibility to take an active stance in climate change mitigation.

Dr Renzi said: “The ocean is never too far away, and it affects every living being on the planet.

“Human activities can affect the ocean on a global scale. Therefore, we have the power to influence such events, no matter where we live.

“I think the format of the game is ideal to raise children’s interest in our oceans, to help them understand the vital role they play in our lives and the profound implications of climate change on a global scale.

“I also hope the game will inspire their interest in scientific research, and help them appreciate the role of research in mitigating risks.”

Storm Force has been funded by the AXA Research Fund and developed by games studio Team Cooper.

Isabelle Bergeron, Head of Communications at the AXA Research Fund, said: “We are proud to support Dr Renzi's work, not only his research project but his outreach activities as well.

“At the AXA Research Fund, we believe that it is key not only to fund the best science on key societal issues but also to encourage our grantees to make their research accessible and useful to a broad audience.

“We hope that through this video game, more people can learn about the science behind storm surges and the way to protect themselves – in a fun, interesting new way.”

Dr Renzi says his future plans for the game include working with schools to get it embedded into the curriculum.