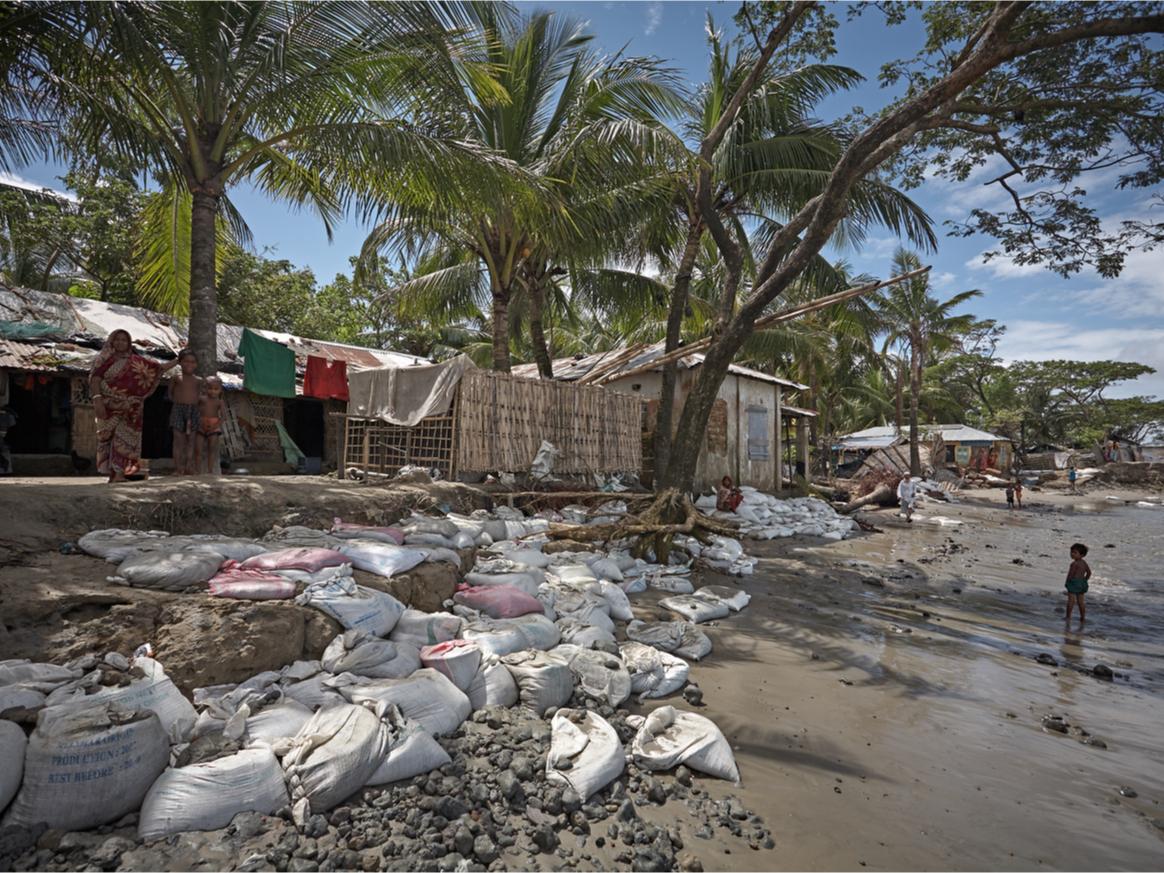 Coastal Bangladesh was lashed by a punishing storm this year, then submerged by monsoon floods. The damages linger long after.

Cyclone Amphan tore across Bangladesh’s southwestern coast in May, and severe floods inundated a quarter of the country weeks later.

Photographer Zakir Hossain Chowdhury’s images show how the damage endures. Battered communities in parts of Khulna district, a strip of coastal wetlands, are still living in temporary homes on embankments, or in emergency storm shelters meant to house people for days – not weeks or months.

Amphan smashed open kilometres of embankments protecting sub-districts like Koyra and Assasuni. The barriers, which keep tidal waters at bay, haven’t been repaired, leaving communities exposed to daily floods that rush in with each high tide.

The fallout goes beyond the physical damage. A chain of disasters – including a pair of storms last year – have drained income and shattered livelihoods. Child marriage is on the rise as families struggle to cope, and as schools remain closed due to the coronavirus pandemic. Tired of rebuilding, some families are deciding to leave. This is a migration pattern that has been repeated across the country, each time disasters chip away at income or destroy homes and fields.

Syed Sheikh, 42, isn’t willing to live with the risk any longer. Months after Amphan hit, he decided to pack up his life on the coast, moving further inland to a town where he hoped his family would be safer.

He is tired of the constant rebuilding. “Our house was damaged for the eighth time in my life,” he said.

The Bay of Bengal is a basin for some of the world’s deadliest tropical cyclones. Storm risks usually peak in May and November, bookending a monsoon season that routinely floods millions in South Asia.

Cyclone Amphan formed in May, careening through India’s eastern coast and striking Bangladesh. The storm caused widespread damage in India’s Odisha and West Bengal states before crashing across the border into Bangladesh.

More than 200,000 homes were destroyed or damaged in Bangladesh. Three quarters of families in the hardest-hit areas, including Khulna, reported their food stocks were wiped out or drained.

Amphan was followed by severe monsoon floods across South Asia, which inundated northern Bangladesh and swept southward. The floods set in unusually early in June, and lasted longer than two months in some areas. At the peak of flooding in July and August, at least a quarter of the country was submerged, including parts of Khulna district still reeling from Amphan.

This year’s disasters followed two 2019 storms, Fani and Bulbul, which carved a path through the same coastal region. In recent years, countries like Bangladesh and India have minimised disaster casualties through extensive early warning and evacuation systems – storms in 1970 and 1991 are estimated to have killed hundreds of thousands. But the damage from consecutive disasters builds, destabilising communities over the longer term.

Amphan destroyed at least 76 kilometres of coastal and river embankments, according to estimates by the Bangladesh Red Crescent Society.

Wide swathes of land remain submerged during daily high tides. Roadsides and smaller embankments have become narrow islands of refuge, where families and livestock crowd together.

Shunoy Sarker, 26, said he and some 120 families have sheltered on embankments like these since Amphan hit in May. “For long periods, we are living with saltwater,” he said, describing how saltwater rushes in during high tides. “We don’t have any income.”

Displaced beside their homes

Onita Rani and her neighbour walk in front of their damaged houses.

Many made homeless by Amphan still live nearby: Their homes may still be standing, but the constant flooding makes them uninhabitable.

With coastal embankments destroyed and damaged, the floods return at high tide each day.

When the tide begins, saltwater enters my house and then I sit up with my goats on my bed,” he said. “We are leading life worse than beasts.”

BRAC, the Bangladeshi aid group, says child marriage is on the rise during the coronavirus pandemic as economic pressures build. These pressures also grow after disasters, including Amphan and the nationwide floods.

Some stranded families in Khulna report that child marriage has become more common.

Shopna, 14, said many of her friends are now married: “During this coronavirus period, most of my classmates got married and I am alone now,” she said.

Coastal Bangladesh’s network of storm shelters – sturdier, concrete buildings on higher ground – are meant for emergency use, but they have become longer-term housing for some families.

“Our houses are submerged in tidal waters,” said Kulsum Ara Banu, 68, who is also living in a shelter. “We are poor, and we are not able to build our houses again.”

Residents say they need embankments to be repaired in order to start rebuilding their own homes. Some of this is underway. Local governments are reinforcing damaged barriers with sandbags. However, the material is not permanent.

Our embankment collapsed and our houses have eroded,” said Habibur Rahman Sarder, 56. “We have no space to live, no space to cook food, and no place to grow food.”

Bangladesh: Building resilience in the eye of the storm (Part 1/3)

Bangladesh: Ever so vulnerable to storms, floods and sea level rise