A paradigm shift for guarding delta cities against floods 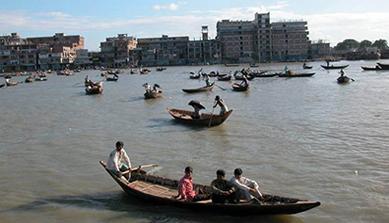 Maria Belen Andaya-Eusebio, Mayor of Pasig City in the Philippines, is devoting much of her time to helping her city manage the risk of floods. Pasig City is one of the low lying cities in Metro Manila. It has to cope with excess water from the three surrounding waterways - Pasig River, Marikina River, and the Manggahan floodway - which makes it particularly vulnerable to flooding.

The experiences of the Philippines and Bangladesh are not uncommon in Asia. Many delta cities across the region are prone to flooding, which is particularly devastating for the poorest and most vulnerable populations. Rapid urbanization, population growth and economic development expose more people, livelihoods, and assets to such risk. It is estimated that by 2025, 410 million urban dwellers in Asia will live in areas facing high risk of floods if no concrete mitigation and adaptation measures are put in place.

Although many countries in the region have made significant progress in controlling floods, new approaches are still needed.

To meet this demand for innovative knowledge, the World Bank Group recently brought decision-makers and practitioners from Bangladesh, China, the Philippines, and Vietnam on a study tour to the Netherlands, a key development partner with over 400 years of experience in managing water resources and protecting its population and cities from the devastating effects of flooding.

Both Minister Nazrul Islam and Mayor Andaya-Eusebio participated in the tour.

“Similarly to many cities in the Netherlands, Pasig City is a low lying city in Metro Manila. We have made progress to prevent flooding but we can learn from the Dutch experience, which could potentially benefit not only Pasig City, but the entire Metro Manila and protect a population of 12 million people,” Mayor Andaya-Eusebio noted.

Minister Nazrul Islam agreed. “The Netherlands and Bangladesh are both deltas. Our challenges are similar but also different because in Bangladesh we are talking about much larger cities of 15 million people.”

So how can they benefit from the Dutch expertise?

While there is no one size fits all approach, the Dutch experience offers some lessons. For example, how to translate a long-term, integrated vision into practical solutions that adapt to new realities brought by climate change.

After the serious floods of 1953, the Dutch invested in large scale infrastructure that still protect their cities and people even today. However, in the early 1990s, extremely high river tides nearly caused another disaster. Awakened by this new threat, the Dutch realized that infrastructure alone was no longer an adequate solution.

They adapted their approach to living with water instead of combating it - a paradigm shift that was backed by high-level commitment and involved stakeholders at all levels. Wherever possible, the new approach made ‘room for the river’ to flood safely, instead of heightening dikes and levees. Moreover, widening rivers was done in a way that improves the quality of environmental and social surroundings.

The Dutch also built multi-functional urban structures, such as green roofs and water plazas that lower the flood peak discharge and created recreational space and parking garages that serve as additional inner-city water retention capacity in times of need.

These innovative solutions were implemented as part of a larger, long-term strategy, the Dutch Integrated Delta Plan, which secured solid financial, institutional and regulatory arrangements.

For Minister Nazrul Islam, accessing this type of knowledge can potentially inspire a similar paradigm shift in his country’s urban governance and positively influence the lives of poor populations.

“The Dutch have put in place integrated delta plans and have years of experience in applying technologies we could potentially customize to our own country context”, the Minister said.

Mayor Andaya-Eusebio confirms. “We have really come to realize that solving the climate change challenge requires integrated planning and innovative approaches. Working with partners such as the World Bank and the Netherlands bring this knowledge and innovation to the forefront of our efforts in flood management, which many developing countries can learn from."