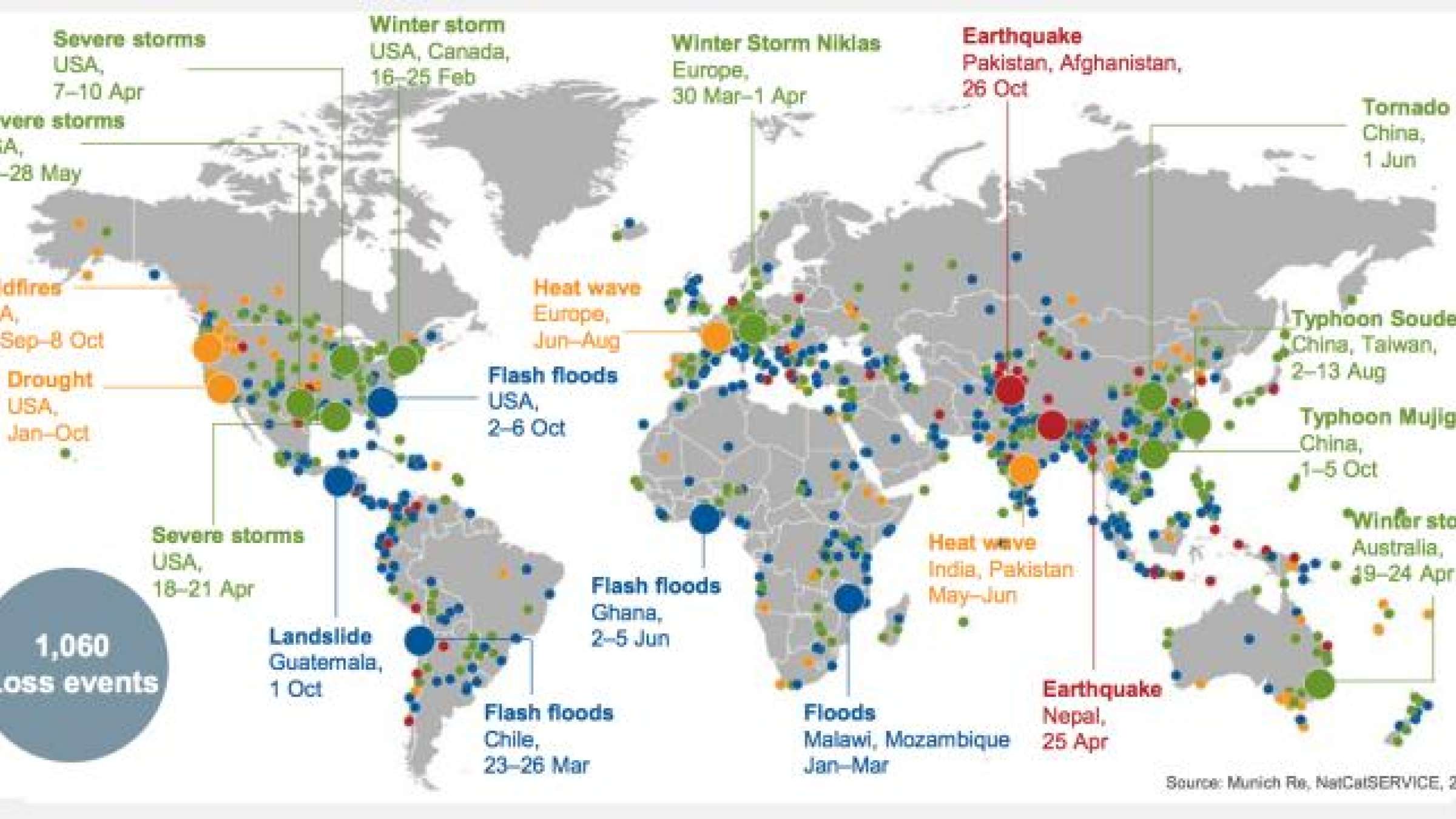 Photo by Munich Re

Losses from natural catastrophes in 2015 were again lower than in the previous year. The natural climate phenomenon El Niño reduced hurricane activity in the North Atlantic, while it brought major floods and heatwaves to many developing and emerging countries. The deadliest catastrophe, and also the costliest in terms of overall losses, was the Nepal earthquake in April, where some 9,000 people lost their lives and overall losses totalled US$ 4.8bn.

“In terms of financial losses, we were somewhat fortunate in 2015: Strong tropical cyclones frequently only hit sparsely populated areas or did not make landfall at all. In the North Atlantic, El Niño helped to curtail the development of heavy storms. Measures to reduce loss susceptibility have also had a positive effect”, explained Peter Höppe, Head of Munich Re's Geo Risks Research Unit. However, the comparatively low losses are no reason to become complacent: “Scientists believe that in 2016 the strong El Niño phase might be followed by its twin sister, La Niña. Both versions of the climate oscillation ENSO (El Niño/Southern Oscillation) in the Pacific influence weather extremes throughout the world. A La Niña phase would promote the development of hurricanes in the North Atlantic, for example.”

The year at a glance

The year's most devastating natural catastrophe was the earthquake in Nepal, which occurred on 25 April northwest of the capital Kathmandu and reached a magnitude of 7.8. Nepal and the neighbouring states of India, China and Bangladesh are all highly exposed to earthquakes, as this is where the Indian and Eurasian continental plates meet. The Indian plate moves about 4–5 cm north each year and pushes up the world's highest mountain range, the Himalayas, by about a centimetre each year. This is what causes these powerful earthquakes.

And that was also what happened just before midday on 25 April near the town of Gorkha. The tectonic plates were displaced by up to four metres at a depth of 10–25 km. Countless buildings, including many historically important sites, were destroyed. Around 9,000 people were killed and 500,000 were made homeless. Landslides occurred in the mountains to the north, which buried entire villages in the valleys. It is believed that many more would have died if the earthquake had not struck at Saturday lunchtime. Some 6,000 school buildings throughout the country were either badly damaged or destroyed. Thankfully, there are no lessons on a Saturday.

As is so often the case in developing countries, only a fraction of the US$ 4.8bn in overall losses caused by the quake and the aftershocks was insured (US$ 210m).

“Just like in Nepal, the proportion of insured losses for catastrophes in other developing and emerging countries remains very low”, explained Torsten Jeworrek, member of Munich Re’s Board of Management. “The insurance industry is exploring new avenues to close this gap in cover and thus to help people better cope with material losses after a catastrophe.”

For example, Munich Re participates as a risk carrier in risk pools in the Caribbean (Caribbean Catastrophe Risk Insurance Facility, CCRIF), for Pacific island states (Pacific Catastrophe Risk Assessment & Finance Initiative, PCRAFI) and in Africa (African Risk Capacity, ARC). These recently established pools offer covers throughout these regions for risks from weather catastrophes and also for earthquakes/tsunamis in some cases. “These are pioneering solutions, especially as they also permit insurance for the countries that suffer most from the consequences of climate change, but have thus far not been able to organise cover”, added Jeworrek.

Some 94% of loss-relevant natural catastrophes in 2015 were weather-related events. Particularly evident was the influence of the climate oscillation ENSO (El Niño/Southern Oscillation) in the Pacific, which influences weather extremes in many parts of the world. Due to the strong El Niño phase, the number of 11 tropical cyclones in the North Atlantic was below the average for the warm phase which has been ongoing since 1995 (14.8). Of these cyclones, only four reached hurricane strength (average 7.6). Overall and insured losses came to just a fraction of the average of previous years.

On the other hand, El Niño promoted the development of intense tropical cyclones in the northeastern Pacific, partly due to the higher water temperatures it brings. A total of 26 cyclones (long-term average 15.6) developed there, 16 of which reached hurricane strength (8,7). 11 (4.1) grew to severe hurricanes. Many storms in the northeastern Pacific do not make landfall. However, one was particularly noteworthy: Hurricane Patricia was to become one of the strongest storms ever recorded anywhere and the most powerful in the northeastern Pacific ever to make landfall. With peak wind speeds of up to 340 km/h, Patricia made landfall on 23 October (very late in the hurricane season) close to Cuixmala in the Mexican state of Jalisco. Fortunately, this region contains the Chamela-Cuixmala Biosphere Reserve and is therefore very sparsely populated. The storm was also relatively small in size and was unable to cause the sort of damage that many less powerful but larger storms usually do.

Numerous buildings were destroyed in the areas hit by the storm. Overall losses came to more than US$ 0.5bn, with only a small portion of this insured. Had the storm reached the nearby holiday resort of Puerto Vallarta, the damage and losses would have been much greater. “Besides this fortuitous set of circumstances, timely precautions and early warnings helped bring people to safety and prevent losses. One such measure was the prompt evacuation of affected areas ordered by the government”, explained Höppe.

The El Niño phase had a considerable effect on droughts and heatwaves, especially in South America, Africa and Southeast Asia. Overall losses worldwide from such events last year came to US$ 12bn, of which US$ 880m was insured. However, the highest losses from heatwave and drought – albeit not influenced by El Niño – were caused by the hot, dry summer in Europe. The overall loss totalled some US$ 2bn (€1.9bn); only about a tenth of this was insured.

The costliest natural catastrophe for the insurance industry in 2015 was the series of winter storms that struck the northeastern United States and Canada in February. Insured losses came to US$ 2.1bn; overall losses were US$ 2.8bn. Just like the previous year, the entire winter in the northeastern USA was unusually cold and snowy. In Boston, almost three metres of snow fell over the winter months – an absolute record.

North America is regularly hit by many storms each winter. In spite of potential losses from snow, freezing rain and the storms themselves, these events do not usually harbour the same loss potential as tropical cyclones, for example. Nevertheless, a large number of storms over the whole winter can produce significant losses in total. There were direct overall losses of US$ 4.6bn in the USA from the harsh winter of 2014/15, of which US$ 3.4bn was insured. Losses were therefore even higher than in the winter of 2013/14 (US$ 4.4bn, insured losses US$ 2.5bn).

Two tornado outbreaks across the southern USA in late December 2015 brought a destructive and deadly end to what had been a relatively quiet year for severe thunderstorms in the USA. The December outbreaks included two tornadoes of the second strongest category EF4, with wind speeds up to 300 km/h. One of them carved a path through a densely populated suburb of Dallas. Both tornadoes each took the lives of at least ten people. Reliable loss estimates are not yet available. The current El Niño probably had an impact on these events, as winter and springtime tornado outbreaks occur with a higher frequency close to the Gulf of Mexico coasts under El Niño conditions.

There were notable floods in Europe in December 2015. Storm Desmond hit Great Britain on the weekend of 5 December. As it was carrying a lot of moisture from the Caribbean, it developed a so-called “atmospheric river”, which brought extreme rainfall in the county of Cumbria and in the border area with Scotland. In places, there was as much as 200 litres of rain per square metre, resulting in serious flooding. The storm then swept across Scandinavia. Initial estimates suggest losses from this storm system over northern Europe could reach US$ 1.5bn (€ 1.4bn), with expected insured losses of US$ 0.8bn (€ 0.7bn).

Further storms and heavy rain brought more floods to the north of England towards the end of the year. Storm Eva in particular led to severe flooding in Yorkshire, with large parts of the city of York submerged under water. Although it is too early to be conclusive, the overall losses from these floods could well be over € 1bn. The flooding occurred in areas that had already been badly hit by floods several years before. Since then, flood protection measures have been carried out, but they were not enough to stop the flooding from these storms.

The floods in the north of England are the result of weather conditions that persisted for several weeks, with unusually mild and calm weather in central Europe and storms and heavy rain over the British Isles. Such persistent weather conditions intensify due to changes in the location and track of the high-altitude winds (jet stream). Recent studies indicate that this may be linked to the warming of the Arctic regions and thus influenced by climate change.

Note for the editorial staff:

Munich Re stands for exceptional solution-based expertise, consistent risk management, financial stability and client proximity. This is how Munich Re creates value for clients, shareholders and staff. In the financial year 2014, the Group – which combines primary insurance and reinsurance under one roof – achieved a profit of €3.2bn on premium income of over €48bn. It operates in all lines of insurance, with over 43,000 employees throughout the world. With premium income of around €27bn from reinsurance alone, it is one of the world’s leading reinsurers. Especially when clients require solutions for complex risks, Munich Re is a much sought-after risk carrier. Its primary insurance operations are concentrated mainly in the ERGO Insurance Group, one of the leading insurance groups in Germany and Europe. ERGO is represented in over 30 countries worldwide and offers a comprehensive range of insurances, provision products and services. In 2014, ERGO posted premium income of €18bn. In international healthcare business, Munich Re pools its insurance and reinsurance operations, as well as related services, under the Munich Health brand. Munich Re’s global investments amounting to €227bn are managed by MEAG, which also makes its competence available to private and institutional investors outside the Group.