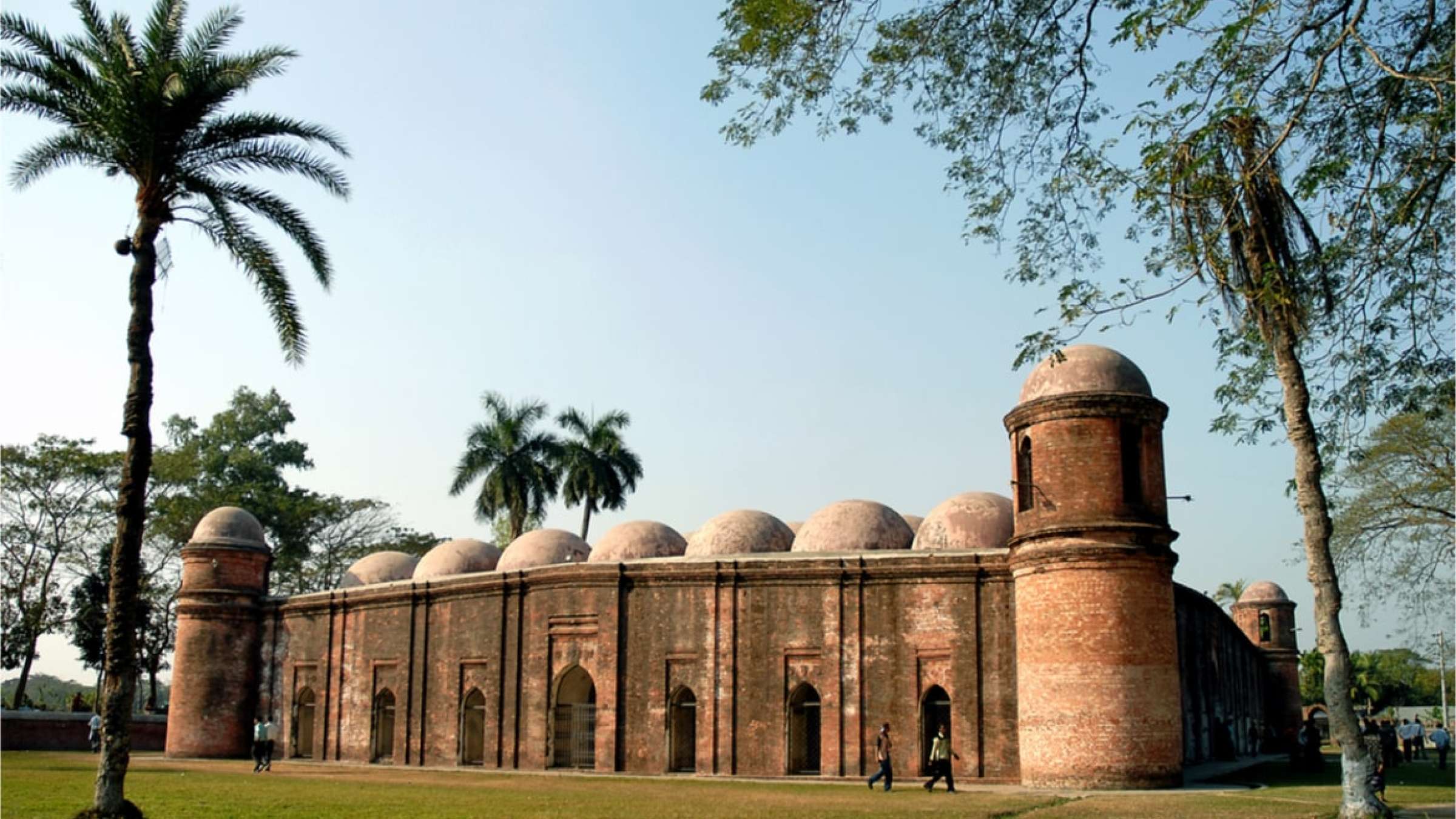 A view of the Sixty Dome Mosque, part of Mosque City, a UNESCO World Heritage Site in Bagherhat, in southern Bangladesh.
Jono Photography/Shutterstock

Worsening climate-change-driven heat, heavy rainfall and storm surges threaten Bangladesh's coastal mosques. What needs to be done to protect them?

Since the 15th century, southern Bangladesh's "Mosque City", dominated by the imposing brick Sixty Dome Mosque, has been a pilgrimage destination for pious Bangladeshis and for tourists.

"I believe if I wish something and visit the mosque, Allah will accept my wish and I'll see success in the future," said Shofik Ahamed, a university student who explored the landmark, a World Heritage Site, on his recent Eid holiday.

But Sixty Dome Mosque and a sprawl of dozens of other medieval mosques, public buildings, tombs and graveyards at the estuary confluence of the Ganges and Brahmaputra rivers face an increasingly uncertain future as the planet warms.

In Mosque City such changes are undermining historic structures, causing the surface of aging bricks and masonry to disintegrate more rapidly, for instance, and allowing fungus and plants to gain a foothold.

Stronger hurricanes and storm surges are also damaging the structures, as is growing saltwater intrusion through the soil and air that seeps into historic buildings, researchers say.

Climate change-driven sea level rise "is a big threat for heritage sites", warned Khandoker Mahfuz-ud-Darain, a Khulna University professor who since 2017 has been looking at such impacts on southern Bangladesh's cultural heritage.

The threats in Mosque City are similar to those facing about 127 protected archaeological sites - many of them historic mosques - in Bangladesh's coastal districts.

Already, at least 50 have been damaged by worsening climate impacts, said Afroza Khan, the Khulna region director for the Bangladesh government's Department of Archaeology.

Mahfuz-ud-Darain believes that, by mid-century, climate change impacts will be the major threat to the country's heritage sites - and said planning should start now to protect them.

As climate impacts strengthen, "normal renovation will not work at these mosques", he warned.

Bagerhat's Mosque City - formerly known as Khalifatabad - was established by Turkish general Ulugh Khan Jahan and flourished until his death in 1459.

Today the mainly brick structures, restored early last century after being abandoned and covered by jungle following Jahan's death, offer some of the best examples of the Bengal Sultanate style of Muslim architecture.

But history is at risk in Bangladesh and around the world, as global warming imperils World Heritage Sites, from Venice's frequently flooded St. Mark's Square to Easter Island's erosion-threatened statues.

"Climate change is among the greatest threats facing cultural and natural heritage sites globally," with at least one in five monuments already at risk, said Thomas Mallard, a spokesperson for the UNESCO World Heritage Centre.

The U.N. agency is working with countries and communities home to heritage sites to build resilience to the new pressures, he said. UNESCO offers emergency funding to support damage assessment and reconstruction when a disaster hits.

Such funds have already been used to carry out post-flood assessments and repair work in places from Yemen's Old Sana’a to Sudan, where ancient buildings near the Nile River were inundated in 2020.

But Mahfuz-ud-Darain, who sits on the steering committee of the international Climate Heritage Network, said countries like Bangladesh also need to step up their own protection efforts.

He recommends a boost in funding for research into climate impacts on heritage and stepped-up efforts to adapt historic structures to coming changes, as well as ensuring historic preservation efforts sit within broader national climate policy.

Khan, of the government's Department of Archaeology, said efforts were already being made this year to identify the coastal historic sites most at risk.

The department has also proposed changes to the Antiquities Act that would make historic sites threatened or damaged by climate impacts eligible for state funding for protection and repairs.

Mohamed Helal Uddin, who for 30 years has been the imam at Sixty Dome Mosque, hopes help will come soon, noting damage to the historic building "would be a great loss for us".

"We have to save it for future generations," he said.

Read the original story here
Share this
Related information
Related links
Mosques in Japan responding to COVID-19 pandemic: Infection prevention and support provision
Potential of mosques to serve as evacuation shelters for foreign Muslims during disasters: a case study in Gunma, Japan
Mosque as a vaccination site for ethnic minority in Kanagawa, Japan: leaving no one behind amid the COVID-19 pandemic
Unnoticed but important: revealing the hidden contribution of community-based religious institution of the mosque in disasters
Keywords
Hazards
Flood
Storm Surge
Themes
Climate Change
Cultural Heritage
Country & Region
Bangladesh