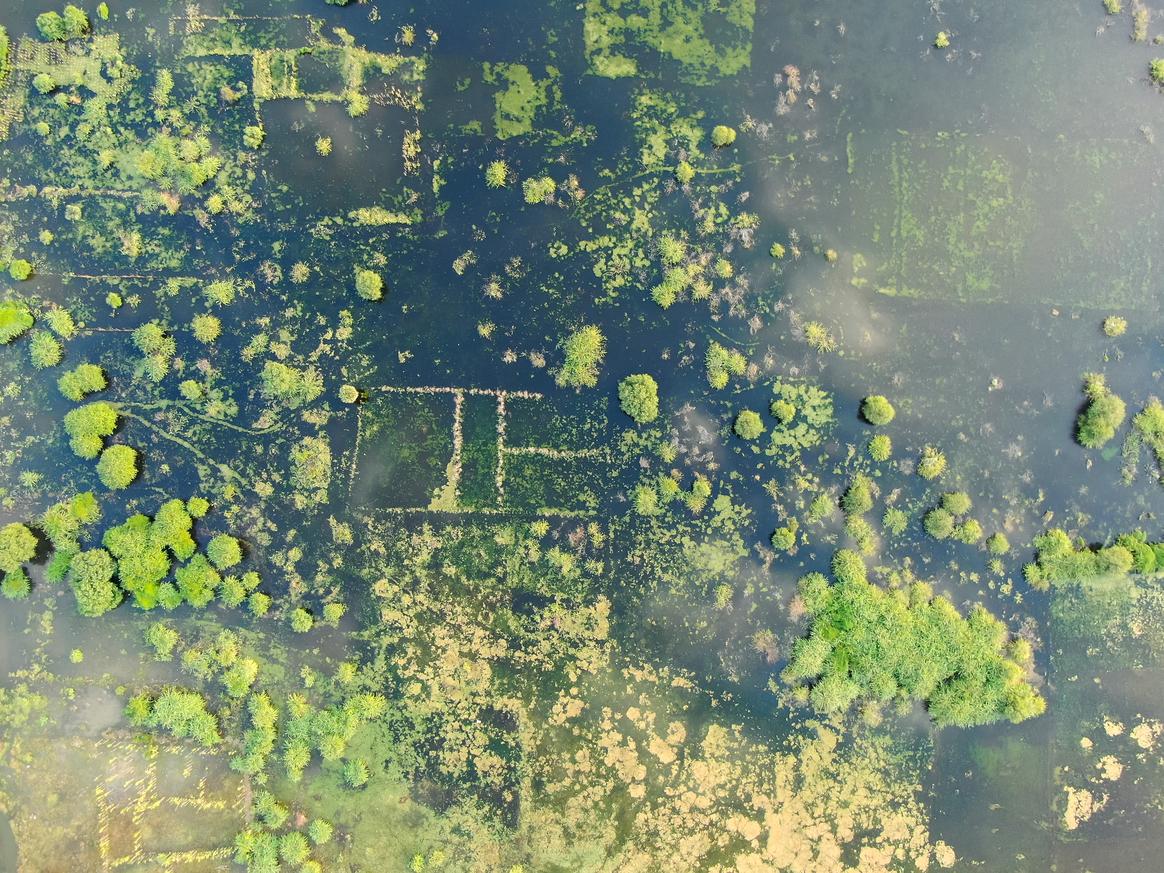 Thousands of farmers in India and Bangladesh have been compensated for flood damage to their crops, thanks to innovative satellite-based insurance developed by IWMI scientists. Between 2017 and 2020, farmers from 7000 households in Bihar, India, and Gaibandha, Kurigram and Sirajganj districts in Bangladesh, shared a total payout of 150,000 USD.

IWMI is bringing its Index Based Flood Insurance (IBFI) product to thousands more farmers through private sector partnerships. In India, its work with WRMS will help to insure 25,000 farmers against floods and other risks, and in Bangladesh, a partnership with Green Delta Insurance Company is making the insurance available to 100,000 farmers.

Eva Begum is a smallholder from Gaibandha who took part in IWMI’s 2019 flood insurance trial. Torrential monsoon rains triggered floods and landslides, causing damage to her home. As part of the trial, Eva received BDT 3600 (USD $43) compensation for loss of earnings as an agricultural labourer. She was able to use the payout to quickly repair her home and get back on her feet. “Without the insurance”, says Eva, “I would have had to take out a loan with interest, and I would have been anxious about making the repayments.”

In South Asia, climate change is magnifying the risk from extreme weather events and increasing associated economic losses. Between 1952 and 2018, annual floods destroyed 258 million hectares of crops and damaged more than 81 million homes in India. This caused economic losses totalling USD 62.8bn. Similarly, over the past 40 years, Bangladesh has experienced at least seven major floods. Among the worst were those of 1987, 1988, 1998, 2004 and 2007, which caused a total economic loss of USD 8.4 billion. Most vulnerable to floods are the millions of smallholder farmers who live close to major rivers.

Early trials of the insurance were conducted during the 2017 and 2018 monsoon seasons in Bihar, India’s most flood-prone state. The trials proved that the concept was viable but indicated that premium costs could be even lower if farmers’ vulnerability to floods could also be reduced in other ways. This led IWMI to try bundling insurance with moisture-tolerant seeds from CIMMYT and IRRI which were distributed with the support of Borlaug Institute for South Asia (BISA) in a 2019 trial in India. When monsoon floods struck, IWMI distributed nearly 50kg of the seeds. At the same time, 170 farmers from the 600 participating households received compensation, which totaled around USD $5,000. A successful parallel pilot project was also held in Gaibandha district of Bangladesh in 2019, the first time satellite-based flood insurance had been available to farmers in the country.

To date, we have launched the product in three districts, without encountering any data gaps during development. In doing so, we have been able to support our marginal agriculture labourers in cases where they have suffered from loss of income due to flooding

Now IWMI has shown how satellite technology can underpin flood-based insurance products for smallholders, we have formed partnerships with NGOs, finance organisations and insurers in both countries with a view to making such products available to many thousands of farmers. Transferring risk from the poorest and most vulnerable members of society will bolster livelihoods. Contributions will also be made to SDGs on climate, poverty, gender and food security.

How did we do it?

Life is difficult for the farming communities within the vast Indus, Ganges and Brahmaputra-Meghna river basins. Variation in the annual monsoon and natural phenomenon such as El Niño and La Niña, frequently cause catastrophic flood and drought events that particularly affect smallholders. In attempting to develop an insurance product that could reduce the risk from flooding for these farmers, IWMI encountered two main challenges: 1) how to acquire the data needed to build an appropriate product; and 2) how to reach the people who would benefit most from the insurance.

At the heart of IWMI’s flood insurance product is a hydrological model, which helps to predict where runoff will travel and collect in the event of severe rainfall. The model identifies areas most at risk from flooding; essentially, a flood-risk ‘index’. Initially, observed rainfall and discharge data were used to build the model. This provided a good degree of accuracy but meant that development was limited to areas where there were high levels of observed data, such as from weather stations. Fortunately, the availability of high-resolution satellite data from the European Space Agency ESA Sentinel 1 satellite helped to overcome this challenge.

In the most recent insurance pilot in Bangladesh in 2019, IWMI researchers used satellite maps from the National Aeronautics and Space Administration (Nasa) MODIS mission, looking at 250m by 250m plots of land, to map inundation on a daily basis between 2001 and 2018. This highlighted historic patterns and showed where flooding might happen in the future. The researchers validated the model using data from the Bangladesh Water Development Board (BWDB) and European Space Agency (ESA) Sentinel-1 satellite data. Insurance experts then designed payout conditions around anticipated timings and levels of flooding, potential crop damage, wages and other socioeconomic factors.

Although insurance is something many of us take for granted, it can be an expensive outlay for some farmers. To combat this, in 2016 IWMI scientists began developing a low-premium insurance, based on state-of-the-art satellite technology, which would compensate poor and vulnerable farmers if their crops were damaged by flooding. They used historic flood data to create an index of flood risk across different areas and combined this with socioeconomic data to inform pricing. Using satellite data to quantify the location, depth and duration of floodwaters, meant claims could be verified without extensive field visits, keeping premiums affordable and enabling pay-outs to be made quickly.

IWMI targeted the most vulnerable smallholders, including women and landless tenant smallholders who have the most to benefit from flood insurance. Established agencies have an important role to play in making satellite-based insurance schemes available at a wide scale, while partner institutions that understand rural social structures and have institutional capacity and credibility at village level can help to ensure farmers fully understand the benefits of insurance.

August is usually a tense time for farmers in Bihar, India. Having sown crops in July, they eagerly await the arrival of rains. All too often the rains that finally arrive are too heavy and wash away their crops, leaving smallholders with no food and no produce to sell. Bihar was a good place to start testing IWMI’s flood insurance product. The first pilot of 200 farmers in 2017 saw 42 farmers who lost all their crops during the monsoon receive maximum compensation of USD 285 per hectare. Others received between USD 96 and USD 200 according to the extent of their losses.

Early trials were promising, but farmers needed additional support to help them get back on their feet. In 2018, IWMI conducted a larger pilot project in collaboration with the Indian Institute of Water Management (IIWM) of the Indian Council of Agricultural Research (ICAR). Together, they bundled the IBFI product with vegetable seeds to help build farmers’ resilience. Four hundred farmers living in 11 villages in Bihar’s Muzaffarpur district, including two that had been involved in the 2017 study, participated in the new project.

In response to pilot scheme feedback, the IWMI team changed the flood threshold level that determined when payouts were made, reaching an agreement with seed companies to ensure sufficient stocks would be available in flood-prone areas. Again, a total of 170 farmers received around $5,000 of compensation. Meanwhile, IWMI distributed nearly 50kg of seeds to 63 farmers.

In January, I received an insurance payout of INR 3500 [USD 45] and seeds for ridge gourd. I am thankful that I received the money on time otherwise I would not have been able to farm at all. I did not have any money for fertiliser or medicine. I paid for fertilisers, medicine and labour through that money. I do not have an earning partner so the money was invaluable.

In 2019, IWMI partnered with Oxfam to run a parallel pilot project in Bangladesh, the first of its kind in the country. Run under Oxfam’s Resilience through Economic Empowerment, Climate Adaptation, Leadership and Learning’ (REE-CALL) program, the trial involved 3,500 smallholders (750 households) from two upazila (sub-districts) of Gaibandha district. When heavy rain battered Bangladesh from early July 2019, nine districts were severely flooded, including Gaibandha. The trial participants were all affected by the floods and they shared BDT 2.67 million (USD $31,500) in compensation. It took just two weeks to assess the claims, with payouts making their way into farmers’ bank accounts soon after.

IWMI’s innovative solutions on Index Based Flood Insurance demonstrate that using satellite technology can help enhance resilience among flood-affected communities in Bihar. We hope that, as part of the Bihar Disaster Risk Reduction Road Map, this insurance can be made available to many thousands more people in Bihar in future.

Looking to the future

The evolution of IWMI’s flood insurance has shown that for it to be truly helpful for farmers, it needs to be part of wider efforts to strengthen resilience. This was demonstrated through the results of the latest trial in India, which involved bundling seeds, weather forecasts and information on best farming practices. Farmers affected by minor flooding successfully used the seeds to achieve normal yields, despite the wet conditions, and those whose crops were ruined by floodwaters were able to recover their situation by claiming on the insurance. IWMI hopes to make similar insurance products available to much larger numbers of farmers.

Based on its findings, IWMI is now also looking to develop a composite climate insurance product. This will use satellite-based indices in a similar way to IBFI, but will cover farmers for several climate crises at once. The product could insure farmers against floods, droughts, heatwaves, coastal inundation, cold spells, and potentially flash floods and landslides too. Essentially, farmers would be able to opt for particular bundles of cover, according to the risks in their particular location. Again, seeds – both moisture and drought-tolerant – plus weather information and agronomic support may be bundled with the insurance to give farmers the best chance to cope if climate shocks take place.

IWMI is also currently in consultation with several start-up companies in India to ascertain the best ways to develop and market the product. It’s possible that there could be collaboration with microfinance companies too, which could potentially offer loans to farmers so they can invest in ways that strengthen their businesses. Using climate insurance, financial measures, providing seeds and advice should help to prepare farmers against future climate shocks, minimizing residual risk. Supporting large numbers of smallholder farmers in this way can contribute to achieving the SDGs and underpin food security.

The UN’s Sustainable Development Goal (SDG) 13 calls for the world to ‘Take urgent action to combat climate change’, with Target 1 requiring action to ‘strengthen resilience and adaptive capacity to climate-related hazards and natural disasters in all countries’. IWMI’s work to develop IBFI is helping to answer this call and to shift the development sector’s focus from simply responding to natural disasters to enhancing disaster preparedness. In recognition of this, the Institute won the 2020 GEO Sustainable Development Goals (SDG) Award for the Special Category ‘Innovation’ for its work developing the index-based flood insurance.