By comparing historical temperature and suicide data, researchers found a strong correlation between warm weather and increased suicides. They estimate climate change could lead to suicide rate increases across the U.S. and Mexico.

Suicide rates are likely to rise as the earth warms, according to new research published July 23 in Nature Climate Change. The study, led by Stanford economist Marshall Burke, finds that projected temperature increases through 2050 could lead to an additional 21,000 suicides in the United States and Mexico.

“When talking about climate change, it’s often easy to think in abstractions. But the thousands of additional suicides that are likely to occur as a result of unmitigated climate change are not just a number, they represent tragic losses for families across the country,” said Burke, assistant professor of Earth system science in the School of Earth, Energy & Environmental Sciences at Stanford.

Researchers have recognized for centuries that suicides tend to peak during warmer months. But, many factors beyond temperature also vary seasonally – such as unemployment rates or the amount of daylight – and up to this point it has been difficult to disentangle the role of temperature from other risk factors.

“Suicide is one of the leading causes of death globally, and suicide rates in the U.S. have risen dramatically over the last 15 years. So better understanding the causes of suicide is a public health priority,” Burke said.

To tease out the role of temperature from other factors, the researchers compared historical temperature and suicide data across thousands of U.S. counties and Mexican municipalities over several decades. The team also analyzed the language in over half a billion Twitter updates or tweets to further determine whether hotter temperatures affect mental well-being. They analyzed, for example, whether tweets contain language such as “lonely,” “trapped” or “suicidal” more often during hot spells.

The researchers found strong evidence that hotter weather increases both suicide rates and the use of depressive language on social media.

“Surprisingly, these effects differ very little based on how rich populations are or if they are used to warm weather,” Burke said.

For example, the effects in Texas are some of the highest in the country. Suicide rates have not declined over recent decades, even with the introduction and wide adaptation of air conditioning. If anything, the researchers say, the effect has grown stronger over time.

To understand how future climate change might affect suicide rates, the team used projections from global climate models. They calculate that temperature increases by 2050 could increase suicide rates by 1.4 percent in the U.S. and 2.3 percent in Mexico. These effects are roughly as large in size as the influence of economic recessions (which increase the rate) or suicide prevention programs and gun restriction laws (which decrease the rate). 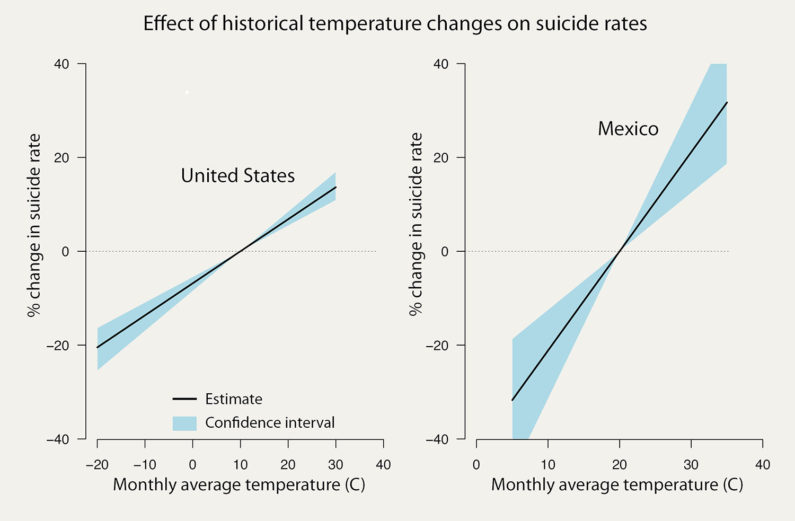 Effects of historical temperature changes on suicide rates are shown for the U.S. and Mexico. (Image credit: Marshall Burke)

“We’ve been studying the effects of warming on conflict and violence for years, finding that people fight more when it’s hot. Now we see that in addition to hurting others, some individuals hurt themselves. It appears that heat profoundly affects the human mind and how we decide to inflict harm,” said Solomon Hsiang, study co-author and associate professor at the University of California, Berkeley.

“Hotter temperatures are clearly not the only, nor the most important, risk factor for suicide,” Burke emphasized. “But our findings suggest that warming can have a surprisingly large impact on suicide risk, and this matters for both our understanding of mental health as well as for what we should expect as temperatures continue to warm.”