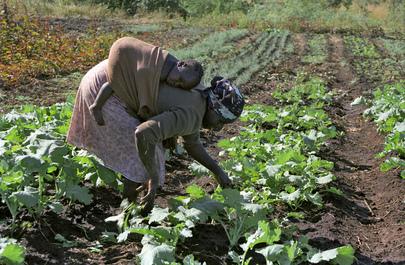 With increasingly extreme weather taking a toll on farming and incomes, Zimbabwe has released a trio of climate change policies designed to make the country more resistant to climate pressures and help it meet its international carbon-cutting pledges.

The Child Friendly Climate Policy is designed to educate school children about climate change and promote climate-friendly practices, such as protection of forests and wetlands and broader use of low-emissions technologies.

And the country's first overall National Climate Policy aims to help Zimbabwe put in place the legal structures needed to guide businesses on becoming greener to meet its emissions-cutting promises under the international Paris Agreement, said Washington Zhakata, climate change management director in the Ministry of Environment, Climate and Water.

"The National Climate Policy is the first step towards achieving this," he told the Thomson Reuters Foundation in an interview.

Tirivanhu Muhwati, a climate scientist with the Ministry of Environment, Climate and Water, said the national policy will also focus heavily on adaptation to climate pressures, as most of the country's communities are rural and depend on agriculture even as droughts intensify.

"The policy has a thrust towards promoting adaptation because, as a developing country, our scope for mitigation or reducing emissions is limited because we are not all that industrialised compared to the developed world," he said.

Approximately 80 percent of Zimbabwe's rural people depend on rainfed agriculture for a living, making them highly vulnerable to more extreme weather associated with climate change, said Environment, Water and Climate Minister Oppah Muchinguri Kashiri, at the launch of the policies this month.

According to the country's submissions to the United Nations Framework Convention on Climate Change, most of Zimbabwe's climate-changing emissions come from burning fossil fuels for energy, from agricultural production, and from waste handling and industrial processes.

The new climate change policy aims to help cut emissions by industry, energy producers, agriculture, and deforestation, among other sources.

The policy comes on top of other recent efforts to add climate change issues into the new national school curriculum, said Muhwati.

"It aims to introduce a wholesome change in the way we do our agriculture. The best way to do this is through our agricultural colleges and universities," Muhwati said.

"Climate smart agriculture is a noble idea if implemented sufficiently well but this is an area with lots of challenges, considering how our country manages, monitors and implements agricultural activities," he said.

"All the three policies can take the country somewhere if implemented properly - but Zimbabwe is very good at formulating blueprints and very poor on implementation," he stressed.

Zhakata, however, said the policy was different from past policies that may have been shelved, if only because so many people now recognise that climate change is a problem and require effective guidance to ensure they can adapt.

Shephard Zvigadza, chairman of the Climate Change Working Group-Zimbabwe, a civil society organisation, said he believes the new policies should be combined with Zimbabwe's 2014 Climate Response Strategy into a national climate change law, with binding provisions for action.

But he said Zimbabwe will require sustained financial and technical support to help it adapt to growing climate pressures.

The national government has said it intends to establish a National Climate Fund that would use 10 percent of the national budget to finance action on adapting to climate change and curbing emissions.

The money would also support efforts to win funding from international climate funds, according to the new National Climate Policy.

The government has said it would also consider a small tax on industry profits to support green growth.