Responding to disasters before they happen: Trainings build resilience in Myanmar’s Dry Zone 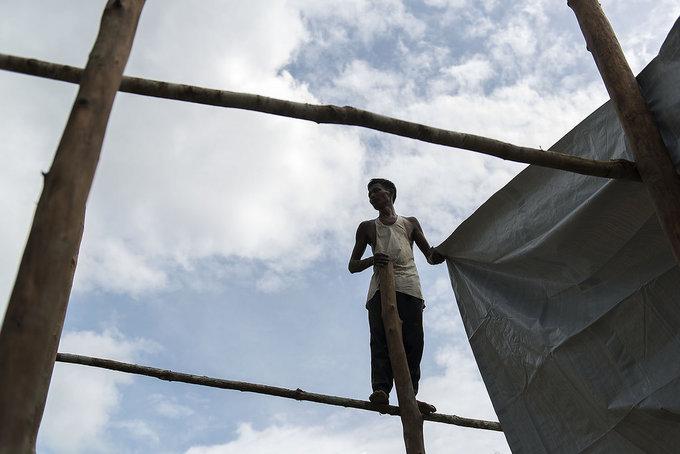 Daw Mi Mi Htun, of the Relief and Resettlement Department (RRD) in the Sagaing Region of Myanmar, used to think that the department's main responsibility was to address disasters and emergencies after they occur.

However, after attending a three-day "training of trainers" event with 20 local government officers on Community Based Disaster Risk Management in Monywa, Daw Mi Mi Htun learned that much could be done to protect lives and livelihoods before disasters strike.

"I realize that there is a lot that my department should do before a disaster to minimize losses. I’m going to apply the knowledge and tools I learnt here in my work and train my colleagues and communities," said Daw Mi Mi Htun, expressing a sentiment echoed by her peers.

Along with a similar training conducted in Nyaung U on 31 August to 2 September 2016, which 27 local government officials attended, the trainings were conducted as a first step towards reducing vulnerability and enhancing resilience of dry zone communities to slow and rapid onset disasters. The trainings covered topics on Community-based Disaster Risk Management (CBDRM), including conceptualising and mapping risk, vulnerability and resilience; linkages between development and climate and disaster risks; and most importantly, the role of communities in reducing disasters risks and vulnerabilities to enhance development gains.

In Myanmar, climate change is causing an increase in the prevalence of drought events and an increase in the occurrence of flooding and storm surges. According to the National Natural Disaster Management Committee, in July and August 2015 alone, flooding and landslides displaced 1.7 million people and caused 125 deaths. At their peak, the floods affected over 9 million people across 12 of Myanmar’s 14 states and regions, destroyed 15,000 homes, and more than 840,000 acres of agricultural crops.

In order to improve responses and mitigate disaster risks for people living in the Dry Zone, the trainings were conducted as part of the Adaptation Fund Project – Addressing Climate Change Risks on Water Resources and Food Security in the Dry Zone of Myanmar. In the Dry Zone, where water is scarce, vegetation cover is thin, and soil is severely eroded, communities in the region are particularly vulnerable to climate variability. Through these trainings, the project is working to strengthen community capacity to respond to disasters which are increasingly threatening human lives and assets under a changing climate.

According to UNDP Technical Specialist, Karma Rapten, “the training provided an opportunity for local government officials to enhance their knowledge on key concepts, tools, best practices, processes in CBDRM and the skills required to train other stakeholders subsequently.”

The project will also reduce vulnerability by working to establish CBDRM Committees in 70 dry zone villages - thereby providing last-mile connectivity in disaster risk communication from the national to district to township levels and ultimately to the communities.