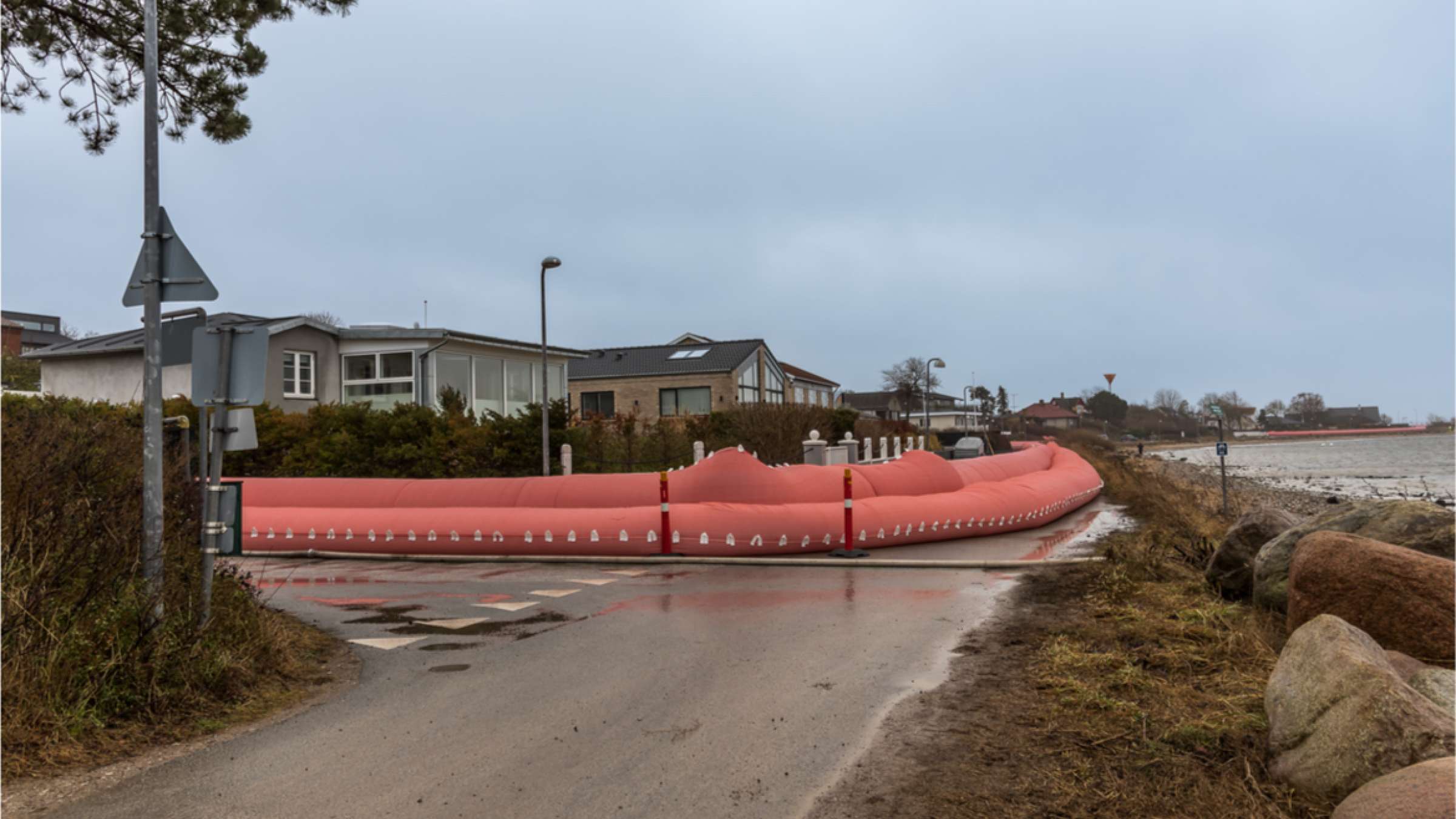 Pink water tube on the shore in Frederikssund in Denmark to prevent flooding from Storm Malik.
Stig Alenas/Shutterstock

As one of the most developed countries in Europe with a high per-capita Gross Domestic Product (GDP), it is important to understand the scale of flood risk in Denmark.

Since climate change is only serving to increase existing risks further, this is a critical period to utilise predictive technology and flood maps to ensure that people, investments, and infrastructure are adequately protected against extreme weather events.

How susceptible is Denmark to floods?

Compared to other countries, Denmark has a particularly high coastal flood risk with ten flood-prone areas having been identified. Of these areas, nine are vulnerable to coastal flooding or a combination of both sea and fluvial flooding. Only one area has a flood risk that is entirely from rivers. Since Denmark is located between two large sea areas – the North Sea and the Baltic Sea – it is perhaps unsurprising that the risk from coastal flooding is high. This existing risk is only set to increase as Denmark’s Ministry of Environment has estimated that climate change could cause sea levels to rise by up to 1.2 metres within this century.

On average, these flood-prone areas place around 9% of Denmark’s population at risk of flooding, with the biggest concentration of risks located in the South. The Danish Islands are particularly vulnerable since islands like Birkholm are only two metres above sea-level. Accordingly, there is a substantial flood risk emanating largely from coastal flooding that places many Danish citizens at risk.

Numerous investments are located in flood-prone areas too. Indeed, the value of assets at risk of flooding is projected to rise by approximately 50% over the next few decades as sea levels rise and precipitation increases. More specifically, the National Bank of Denmark estimates that between 0.9 – 1.2% of Danish homes are at risk of flooding today, with almost twice as many estimated to be exposed to flood risk by 2071. Understanding whether homes are vulnerable to flooding is vital since this can result in a 6% discount when pricing homes exposed to flood risk compared to those which are not vulnerable. Besides, Denmark has no general laws or regulations regarding protection from flood risk since individual landowners are responsible for protecting themselvesfrom flooding.

Ambiental’s FloodMap for Denmark provides highly detailed and accurate predictive data that enables clients to see how potential floods will materialise. Flexible options are available, ensuring the service can be tailored to client needs. This data ensures customers can coordinate the best response to flood risks, ensuring they are prepared before flood events emerge.

Denmark was hit by a storm surge and coastal flooding in January 2017, caused by rising sea levels following a backflow of water from the Baltic Sea. Described as a 100-year event, the east-facing coast of Southern Jutland, the south- and east-facing coasts of Funen and Zealand, and the islands near these coasts were all affected. As a result, insurance companies received 403 claims under the country’s storm surge scheme.

Although it is widely recognised that coastal flooding is a high risk in Denmark, there is also a risk of flooding from heavy rainfall. In fact, there was a cloudburst that hit Copenhagen in 2011 which led to significant flooding. Approximately 150mm of rain fell which resulted in most of the city being flooded by one metre of water. Labelled the “worst cloudburst in 400 years” by Falck, it is estimated to have cost around €800 million in damage with 6.2 billion Danish Kroner paid in insurance claims. This made it the single most expensivenatural disaster in Europe in 2011. Identifying susceptibility to flood risk, as well as the estimated scale of the risk, will arguably help to prevent this level of damage to investments and infrastructure during any future extreme weather events.

To identify at-risk properties, Ambiental’s FloodScore database uses flood modelling algorithms to provide flood scores down to the property level. It can also deliver country-wide flood risk information and regional benchmarking analysis, which can ensure that insurers are better informed and therefore able to accurately price their higher risk exposures.

There is a history of coastal flooding in Denmark dating back as far as 1532. Denmark’s biggest flood event was the flood of November 1872 when large parts of the east coast of Lolland, Falster and Southern Jutland were flooded during a strong east storm which culminated in a hurricane. The extreme weather conditions caused sea levels to reach over 3 metres and roughly 250 lives were lost. Still noted to be the strongest storm surge on record in this area, it also left 15,000 people homeless and destroyed 2,800 buildings.

As noted already, flooding has remained prevalent: there were 20 significant flood events between 2000 and 2008 alone. Floods are not only frequent but can result in a vast amount of damage to infrastructure and property. Indeed, the floods of 2002, 2007 and 2013 caused direct costs amounting to €1,400 million. Each flood cost approximately €450 million – far higher than the EU average of €370 million. As climate change increases the frequency and severity of flood events in the future, it is important to ascertain where flood risks are concentrated in order to implement adequate preventative measures and minimise future damage.

Climate change and flooding in Denmark

Climate change is impacting extreme weather events across the globe. In Denmark, temperatures have already risen by 1.5 degrees Celsius since 1873 while precipitation has increased by 15% in the same period. It is recognised that this is already causing increased rainfall and flooding from more extreme and frequent storms in addition to sea-level rise.

Sea-level rise is already increasing the risk of coastal flooding, but it is projected that there will be a 28% increase in risk by 2115 compared to today. It also means that storm surges can cause significantly worse damage since the water can be pushed further inland, with the west coast of Jutland posing the greatest risk of stronger storms. This is problematic, as the Danish Ministry of Environment has predicted that what would be a 20-year storm surge today could occur every year, or every other year, in the future. Generally, climate change is heightening the flood risk for Denmark from precipitation, the sea, and storm surges, posing greater risks to the country’s inhabitants and their provinces.

Understanding climate science in addition to current and future flood risks is becoming crucial as the risks increase in both magnitude and frequency. Ambiental’s FloodScore Climate Suite provides the necessary data to understand long-term risk and is used by banks, investors, and lenders to deliver on reporting requirements and identify sensitivity to change. Both comprehensive and accurate, this data focuses not only on flood risk analytics but also on physical risks and transition risks.

Denmark is not only increasingly vulnerable to coastal flooding as climate change drives sea-level rises, but there is also an increasing risk posed by storm surges and heavy rainfall. What’s more, recent and historic flood events show that the country has been susceptible to widespread damage to both infrastructure and investments. To minimise future damage caused by extreme weather events, Ambiental’s predictive data and flood risk technology can help to identify flood-prone areas, enabling clients to plan accordingly. Contact us today via our website to make an enquiry about our services or to obtain sample data for Denmark.