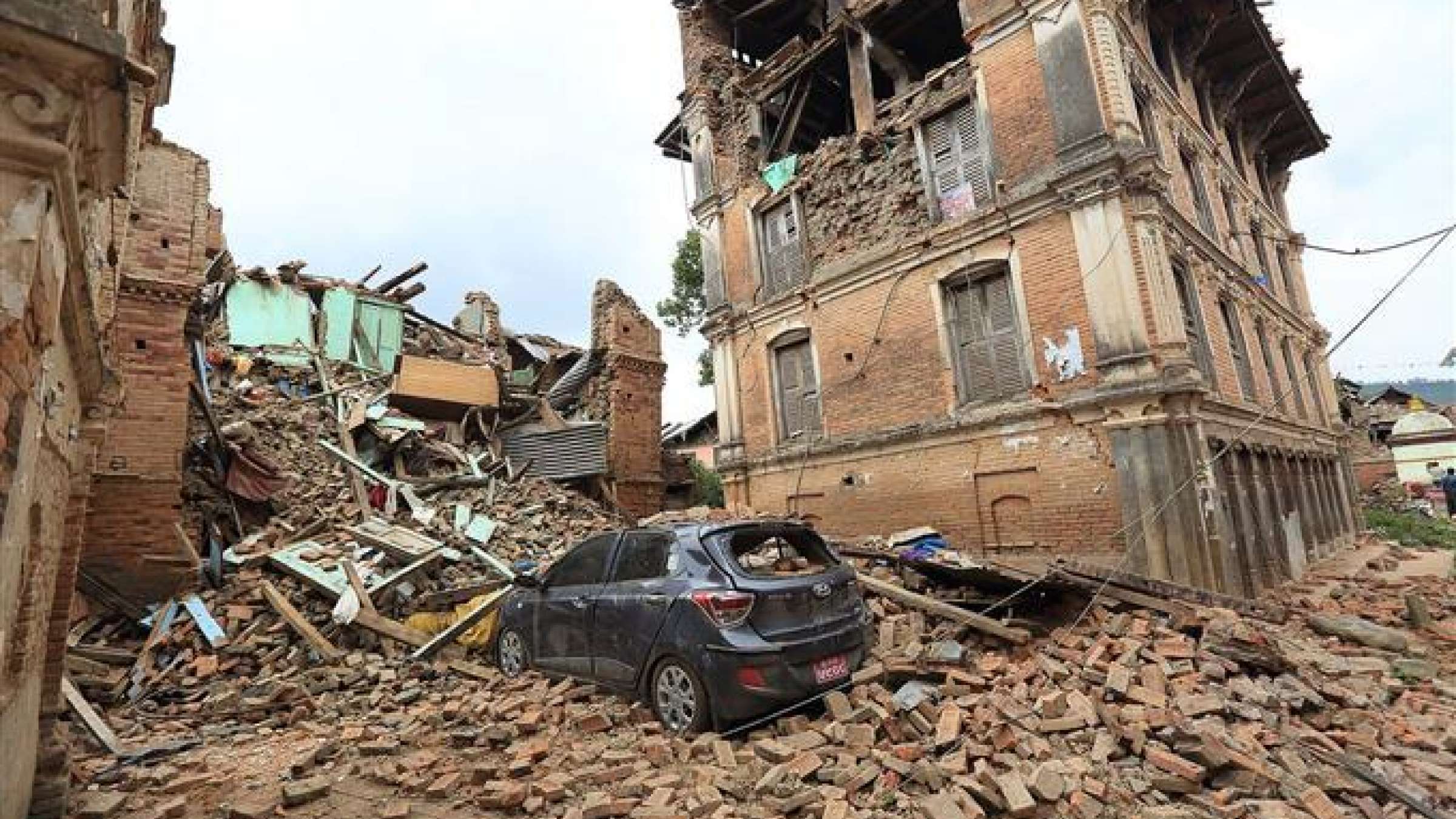 Large earthquakes (and secondary hazards such as aftershocks, tsunamis and earthquake-triggered landslides) continue to cause some of the most devastating humanitarian disasters, yet they remain poorly understood by humanitarian organisations. This is partly because of the unique features of major earthquakes compared to other disasters (International Federation of Red Cross and Red Crescent Societies , 2012). They are unpredictable, low-frequency, high-impact events with little or no warning and very rapid onset. Some level of preparedness and disaster risk reduction is possible in at-risk areas (risk mapping and targeted mitigation, awareness-building, modification of building codes and logistical response capacities, for example) (Concern Worldwide, 2015), but decision-making in the response phase immediately after a major earthquake has often been reactive and ad hoc, rather than evidence-based and strategic.

While the timing of earthquakes cannot be predicted, they are not random. Areas prone to earthquakes are well known, and the science of determining stress build-up along fault lines is well-understood. Scientific approaches are also being developed that can forecast the intensity and spatial distribution of aftershocks. This paper reports on a collaboration between scientists from the University of Edinburgh School of Geosciences and Concern Worldwide to integrate this work into humanitarian planning, preparedness and response decision-making processes. We are also developing a training and support programme for humanitarian workers on how to interpret the forecasts and use them in emergency situations. This paper outlines the main features of the approach and describes the lessons from Concern’s use of a prototype during its emergency response to the earthquake in Nepal in April 2015.

The aftershock forecasting techniques used in this work are based on analysis of online earthquake catalogues, which record the time, location and size of earthquakes worldwide (for example USGS, 2016). In the days immediately following an initial earthquake, the way in which the aftershock rate decays is carefully monitored and extrapolated to indicate the number of events that might be expected over defined future periods. At the same time, the distribution of event size is monitored to forecast the number of large events that might be expected given the distribution of small events.

The forecasts for the Nepal 2015 earthquake were produced in real time by the University of Edinburgh team, who also gave one-to-one email support to Concern staff. In addition, a number of workshops were run prior to the earthquake to develop an understanding of earthquake science and forecasts within Concern’s emergency team, refine the format and content of the aftershock report template and work through a number of scenarios to draw out possible implications for humanitarian practice. The quality of the forecasts and approach was assured by academic peer review and scrutinised by an international panel of geoscientists and humanitarian experts in January 2016.

The magnitude 7.8 earthquake in Nepal occurred on Saturday 25 April 2015. The epicentre was to the north-west of Kathmandu in Gorkha District; an estimated that 8,000 people were killed, 20,000 injured and hundreds of thousands more made homeless. By Tuesday 28 April, Concern Worldwide had a team of five international staff in Nepal. A needs assessment was conducted and the decision made to focus distribution efforts on the badly hit Sindhupalchowk, Dolakha and Sindhuli districts, with the main effort concentrated on Dolakha. The University of Edinburgh team began the process of operational forecasting on 26 April, and was satisfied with the quality of the forecasts by the first few days of May.

In the initial phase of the emergency, the press carried repeated reports of the possibility of a ‘second’ earthquake of more than a magnitude eight (M>8). Scientists had identified an area to the west of Kathmandu which was constantly being loaded with stress because of plate motion, but which had not experienced a big earthquake for more than 400 years. The apparent threat of this second event was picked up by humanitarian agencies and, on 5 May, Concern staff received a briefing from OCHA which indicated that there was a ‘50% chance of another earthquake occurring in the following weeks’. At this time humanitarian staff on the ground were experiencing hundreds of aftershocks, so the idea of a ‘second’ earthquake was confusing: it seemed to suggest that this earthquake would be a special event and that, therefore, the ‘normal’ aftershocks were not the danger. The Concern team was deployed in Dolakha Region, some 170km east of Kathmandu, where they faced the question whether they were in danger from this future event. They immediately forwarded the OCHA report to the scientists who were monitoring seismicity.

The first report from the University of Edinburgh team was emailed to Concern staff on 7 May. It forecast that, when the uncertainty in the estimate was considered, the worst-case probability of an aftershock of magnitude greater than M7.5 was around 20%. It also pointed out, in contrast to the ‘second’ earthquake theory, that since recent seismicity was concentrated in Dolakha Region, this was the most likely place for future large events, rather than west of Kathmandu. Because this information came directly from a trusted source, it helped clarify the confusing situation for the Concern team on the ground. It was used to reinforce awareness of the continued risk of further large aftershocks in the area in which they were working. This was vital as, within a week of the main shock, members of the population were beginning to re-enter buildings, and in some instances being encouraged to do so by staff from other NGOs.

On 12 May, 18 days after the main shock, an aftershock of M7.3 hit Dolakha to the north-east of Kathmandu, causing considerable additional damage to buildings. In some areas, 98% of buildings were destroyed, many that had survived the main shock collapsed and there were more than 200 new fatalities and 2,500 people injured. At this point, 12 Concern staff and 45 partner staff members were deployed in the region. There were no casualties among staff, but landslides temporarily trapped five relief trucks, and two staff working in communities were also stranded. This event was entirely consistent with the high probability of an M7.5 aftershock presented in the 7 May report and the accuracy of the forecast further galvanised the Concern team around the aftershock issue.

An updated report on 14 May confirmed that Concern were still working in the area of maximum seismic activity and concentrating their response in the right areas. Had the University of Edinburgh team’s research indicated that the focus of seismic activity had shifted to other regions, Concern would have considered undertaking an awareness-raising campaign at the very least in these new localities, urging people to stay outdoors while the risks of further damaging earthquakes remained high. The scientific basis of the forecasts meant that the Concern team could talk publically about this risk to other NGOs and local partners, whereas previously they had been reluctant to do so in case what they said was wrong. The team also produced revised safety and security guidelines that included the most recent forecast material and incorporated this into briefings for all new staff. Rather than being ‘at the mercy of events’, discussions were held about the level of future risk, and mitigation measures were put in place.

The complex and fast-moving situation in Nepal in 2015 would have been familiar to anyone who has been involved in similar humanitarian emergencies. Despite these challenges, we maintain that the project led to new knowledge and understanding around aftershock risk, and supported more effective, confident and credible evidence-led decisions and practice. In particular, in accurately forecasting the high probability of a second large event focused on the Dolakha Region, it informed aspects of Concern’s emergency response in valuable ways. The forecasts will continue to inform Concern’s ongoing disaster risk reduction (DRR) work in Nepal. Unfortunately, for some in science and government, there is a belief that the possibility of a ‘second’ large earthquake was realised on 12 May with the M7.3 aftershock, and consequently that the threat of a large earthquake in the future has receded. However, an understanding of earthquake science shows that giant, destructive events will still happen in Nepal, and that the Dolakha earthquake, shown clearly to have been an aftershock of the initial Gorkha event, does not reduce this possibility. The threat of a large M>8.0 earthquake in Nepal remains and must be included in future prevention, mitigation and preparedness planning.

There are two key challenges in moving this approach beyond the pilot stage to wider adoption within the humanitarian sector: organisational capacity and data quality. The success of the initiative was highly dependent on the expertise of a small number of people. The underpinning science is complex and takes skill, time and effort to produce. As is clear from the details contained, for example, in the 7 May message from the University of Edinburgh team to Concern, significant training is required before humanitarian staff are able to understand the science and apply it proficiently. To replicate this level of skill and knowledge at scale will require the commitment of resources from both the science and humanitarian communities.

The second key challenge is data quality. The quality of the data provided by the Nepal Seismological Agency for the Nepal 2015 earthquake was better than is the case in many of the earthquake-prone countries in which humanitarian agencies operate, but much remains to be done. If this approach is to be mainstreamed, there needs to be innovation around real-time data collection using the rapid deployment of portable seismometers as part of the emergency response to a major earthquake.+ Wider uptake of this initiative, as with humanitarian innovation in general, is dependent on a twin strategy of refining, evaluating and consolidating the approach to consistently demonstrate its usefulness, and advocacy to address institutional and other barriers to adoption (Obrecht, 2016).