The effects of historical housing policies on resident exposure to intra-urban heat: A study of 108 US urban areas 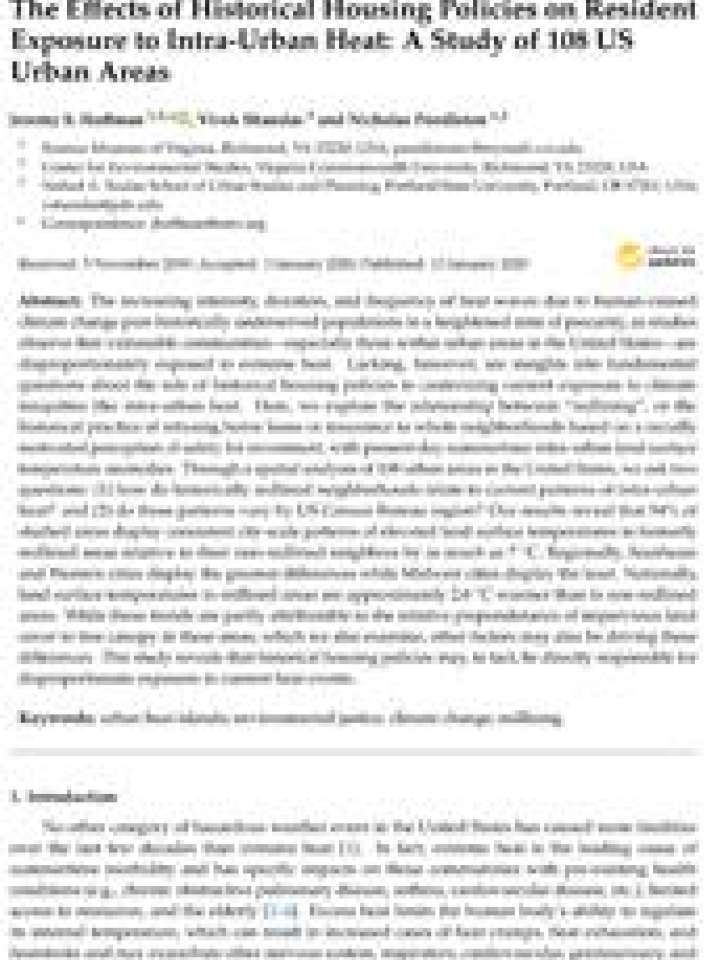 The increasing intensity, duration, and frequency of heat waves due to human-caused climate change puts historically underserved populations in a heightened state of precarity, as studies observe that vulnerable communities—especially those within urban areas in the United States—are disproportionately exposed to extreme heat. Lacking, however, are insights into fundamental questions about the role of historical housing policies in cauterizing current exposure to climate inequities like intra-urban heat. Here, it is explored the relationship between “redlining”, or the historical practice of refusing home loans or insurance to whole neighborhoods based on a racially motivated perception of safety for investment, with present-day summertime intra-urban land surface temperature anomalies.

Through a spatial analysis of 108 urban areas in the United States, two questions are asked:

The results reveal that 94% of studied areas display consistent city-scale patterns of elevated land surface temperatures in formerly redlined areas relative to their non-redlined neighbors by as much as 7 °C. Regionally, Southeast and Western cities display the greatest differences while Midwest cities display the least. Nationally, land surface temperatures in redlined areas are approximately 2.6 °C warmer than in non-redlined areas. While these trends are partly attributable to the relative preponderance of impervious land cover to tree canopy in these areas, which were also examined, other factors may also be driving these differences. This study reveals that historical housing policies may, in fact, be directly responsible for disproportionate exposure to current heat events.