We predicted where violent conflicts will occur in 2020. Water is often a factor

Thousands of people took to the streets of southern Iraq in July 2018. Their anger stemmed from a litany of problems, everything from poor public services to lack of job opportunities to widespread government corruption. Many lacked access to clean water, with more than 120,000 people hospitalized after drinking polluted water in Basra. Others faced frequent electricity outages.

The demonstrations quickly turned violent. Security forces used live ammunition, tear gas and water cannons to control the crowds. While protests eventually died down, they flared again across a number of cities in Iraq in October 2019 for the same reasons as before.

These types of violent conflicts typically arise when a variety of problems converge— corruption and inequality, unemployment, water and electricity shortages, and more. But what if we could predict conflicts, allowing actors to mitigate problems before they turned deadly?

The new Water, Peace and Security (WPS) Global Early Warning Tool aims to do just that.

The tool employs machine learning to estimate risk of conflict over the coming 12 months in Africa, the Middle East, and South and Southeast Asia. The model identifies patterns between violent conflict and more than 80 environmental, economic and social variables going back 20 years, and then compares those patterns to current conditions to pinpoint potential hotspots. Right now, the tool shows that about 2,000 administrative districts across the Global South — about 14% of all surveyed — are at risk of violent conflict between October 2019 and September 2020. In parts of Iraq, Iran, Pakistan, India, Nigeria, Mali and elsewhere, such conflict could be partly correlated with water resource problems. 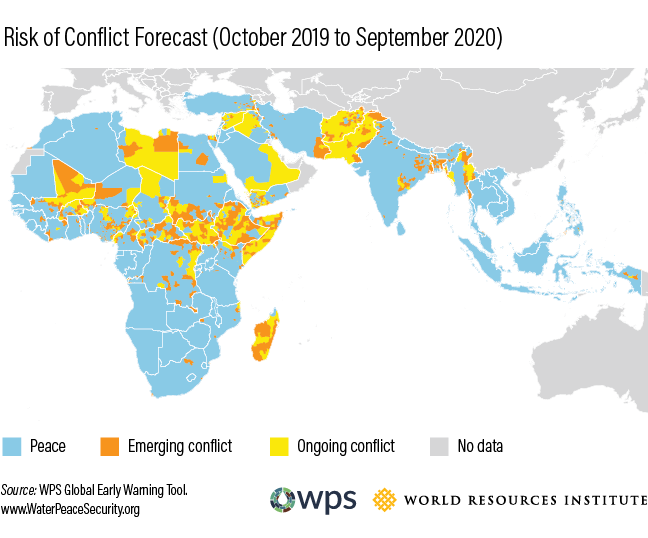 As with initial medical screening tests, we have set up the model to over-predict in order to detect as many conflicts as possible and provide opportunities for preventative measures. Once conflict is detected, further analysis is needed to verify and understand the exact nature of a problem.

How Do We Predict Conflict? Zooming in on Southern Iraq, Iran and Mali

Conflict happens for many reasons, but water — or lack thereof — is often a factor. For this reason, we often refer to water risks like scarcity, flooding and pollution as “threat multipliers.” The WPS platform is the first time a conflict prediction model has used water-resource conditions to assess violent conflict.

A few hotspots where water may be playing a role emerge:

Returning to southern Iraq, we can see that emerging conflict (defined as conflict leading to at least 10 deaths) is predicted for the Basra area through September 2020.

At the same time, the Iraqi unemployment rate hovers around 8% (double that among youth), while corruption is moderately high to high, depending on the indicator used.

A lack of clean, accessible water also appears to be a potential threat multiplier. Water stress (a measure of competition among users) is unsustainably high in much of the Tigris-Euphrates Basin, including in Iraq, Turkey, Iran and Syria. The Tigris and Euphrates rivers account for more than 98% of all water used in Iraq. And there are further problems with the water that is available. Declining flows in the Tigris and Euphrates are allowing saltwater from the Persian Gulf to flow upstream, contaminating freshwater supplies in southern Iraq and ruining agricultural lands.

The WPS Global Early Warning Tool also includes indicators that are not in the model, but which nevertheless provide useful context. Iraq’s level of untreated wastewater, for instance, is very high. It is therefore not surprising that much of the water available in southern Iraq is unfit for drinking. The tool also shows Iraq as the country of origin for 1 million to 5 million refugees, an indicator of a society under stress.

The Global Early Warning Tool is only the first step in a multi-step process. The WPS Regional Tools can identify other risk drivers — such as upstream dams, climate change, inefficient water use in agriculture and cities, and more — that may further exacerbate southern Iraq’s water supply challenges and heighten the risk of violent conflict. The Regional Tools can also support decision-makers in assessing impacts of proposed interventions. 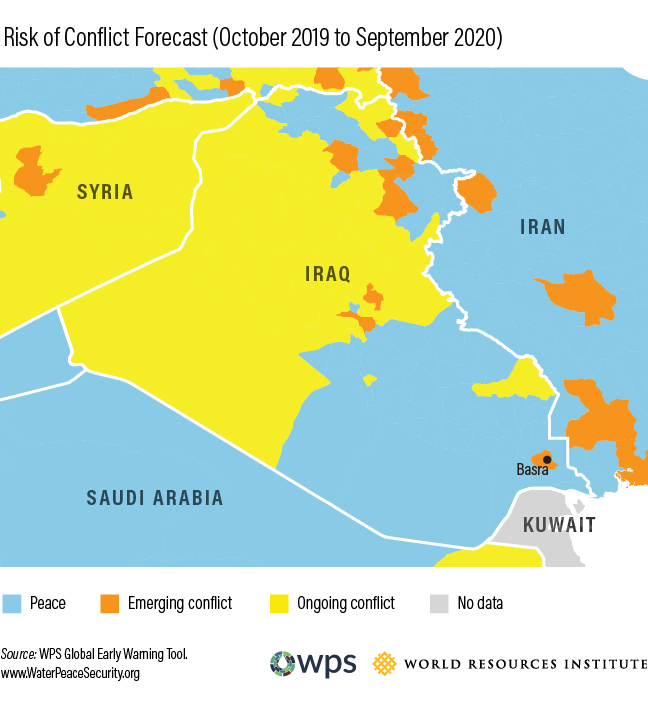 For the period of October 2019 through September 2020, the Global Early Warning Tool is projecting emerging conflict in a number of regions of Iran, including in Sistan and Baluchestan Province (southeastern Iran), Khuzestan Province (southwestern Iran), and areas along the western border with Iraq. The risk of conflict may be growing due to economic factors. Unemployment stands at 12%; youth unemployment is more than double that figure. Inflation was under 10% in 2017, but shot up to over 30% in 2018, in large part due to U.S. sanctions.

Water stress levels are high or extremely high throughout the country. Droughts and floods are both ongoing issues due to high seasonal and interannual variability of water supply. Much of the country was suffering from multi-year drought until late last year, when drought conditions gave way to devastating floods. Untreated wastewater levels are also high, and poor water quality is a significant concern in places such as Sistan and Baluchestan Province and Khuzestan Province.

For the period of October 2019 through September 2020, the Global Early Warning Tool is projecting ongoing conflict across much of northern and central Mali, and emerging conflict in the southern part of the country. Mali’s population has been growing very quickly. Bamako, the capital, has seen its population density more than triple over the past 20 years. There are other significant risk factors: Both poverty and ethnic fractionalization, which looks at a number of attributes of distinct cultural groups in a particular region, are among the highest in the world.

With growing population and population density, more and more people in rural areas are vying for the same water and land. Increasing competition for natural resources is further straining inter-ethnic tensions and contributing to growing violence among farmers and pastoralists. Violence had been mostly limited to the northern regions of the country until a couple of years ago, but has since picked up in central Mali. The Early Warning Tool now predicts that violence will migrate further south into the region around Bamako. 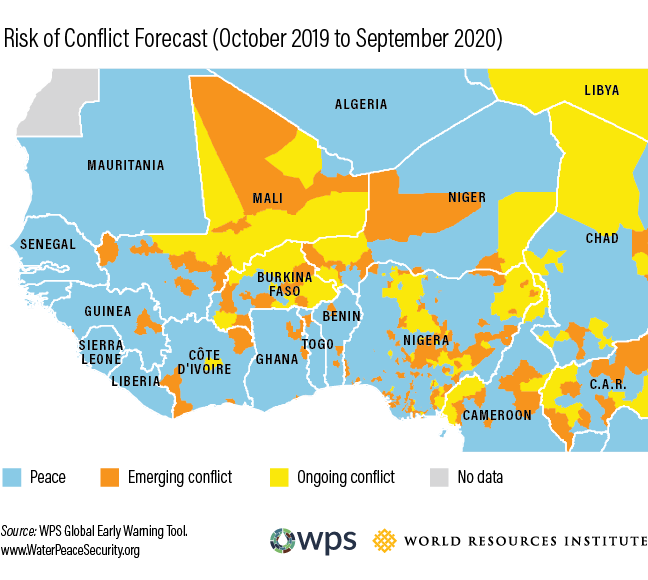 Using Data to Prevent Water-related Conflicts Before They Turn Violent

The good news is that solutions, while not simple to implement, do exist and can help mitigate violent conflict. In Iraq, for example, repairing and vastly expanding water and sewage systems in major cities would help address concerns about government corruption and lack of basic services. Comprehensive transboundary water-sharing agreements on the Tigris and Euphrates rivers could increase water flows into Iraq. Water-use limitations in areas where demand is too high and water-efficiency improvements in both agricultural and urban settings could help regulate supply. Iraq also needs to take steps to adapt to a hotter and drier future, as climate change impacts are already appearing.

The WPS partnership is currently exploring how it can help Iraqi stakeholders evaluate and implement some of these solutions. In collaboration with the International Organization for Migration (IOM) in Iraq, we’ve developed a water resources and water quality model for southern Iraq and modelled the relationship between local hydrology and displacement of people. Organizations like the Ministry of Water Resources and IOM can use these resources to mitigate further social unrest and ensure an adequate response to increased migration pressures.

And with potential conflicts looming across fragile states this year, others such as development and disaster response agencies should follow their lead. By starting with good data, we can mitigate risks like water stress before they contribute to regional destabilization and loss of lives.

The tool is built on the Resource Watch API, which provides access to near-real time data on conflict, water availability and food security. Various WPS partners contribute data and knowledge in developing the tool.

LEARN MORE: Listen to the podcast below to learn more about the Water, Peace and Security Partnership and Global Early Warning Tool.

Read the original story here
Share this
Related information
Related links
Significant risk of water-related conflict in parts of Iraq, Iran, Mali, Nigeria, India and Pakistan over the next 12 months
From Yemen to South Sudan, climate and water stress seen worsening conflict
Water is a growing source of global conflict. Here’s what we need to do
More about the nexus between fragility and disasters
Keywords
Themes
Early Warning
Fragility and conflict
Water
Country & Region
Iraq
Mali