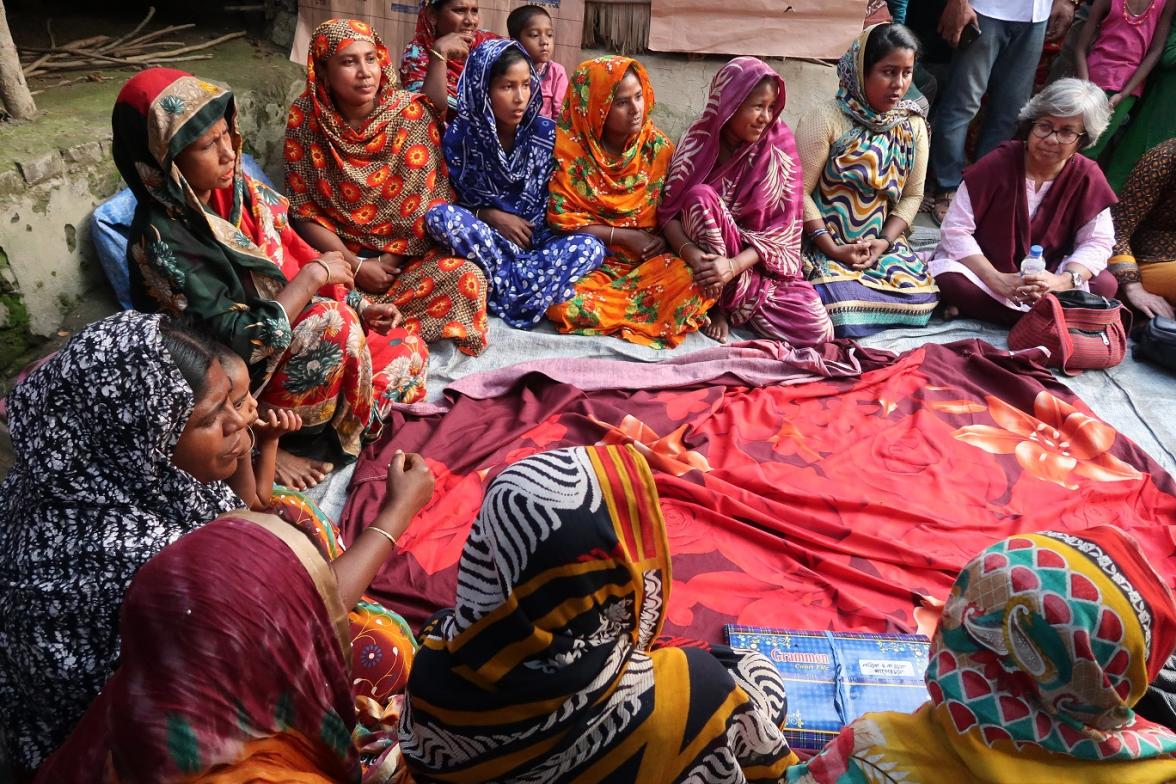 Fed by the Ganges, Brahmaputra and Meghna rivers, around 230 rivers criss-cross Bangladesh.

At around 24,000 kilometers, it is the world’s largest river system.

Viewed from space, the rivers coalesce into a vast, interconnected delta system: a vibrant tangle of waterways and flood plains, fringed by the largest mangrove forest on Earth, the Sundarbans.

Rivers mark the landscape but they also define the way of life, connecting places and people and providing sustenance and livelihoods to tens of millions.

In fact, they are the lifeblood of a country where more than 60 percent of the population live in rural areas and around two-thirds of that population depend on farming for a living.

Bangladesh’s fertile land has been key to growth and has offered millions of people a hand out of poverty.

That growth is becoming increasingly precarious as the impacts of a warming planet intensify.

The changes pose a particularly acute threat to the coastal poor, whose livelihoods depend on agriculture and whose homes sit atop the low-lying plain astride the Bay of Bengal.

In addition to shifting rainfall and rising temperatures, communities face the impacts of more frequent powerful cyclones as well as increasing flooding, salinity and erosion driven by sea level rise.

Health and economic shocks as a result of COVID-19, as well as Cyclone Amphan and severe monsoon floods in past months have compounded the challenges for already struggling families.

On a local level, people living in disaster-prone areas have developed strategies to cope, from storing food and water, to construction of platforms to shelter livestock during extreme weather, to evacuation plans and, increasingly, migration.

Meanwhile on a national level, the Government of Bangladesh has been proactive in integrating concerns into national policymaking, planning and budgeting.  Vital headway has been made, including the development of a National Adaptation Programme of Action, a National Adaptation Plan, a Climate Change Strategy and Action Plan, and a Climate Fiscal Framework, as well as submission of Intended Nationally Determined Contributions under the global Paris Agreement, and integration of climate change priorities into the country’s Five Year Plans.

Beyond its borders, Bangladesh has also actively advocated on behalf of all Least Developed Countries in the push for climate action and finance.

Despite great strides, important gaps and obstacles remain at the grassroots level.

Vulnerable people continue to lack influence over development planning in their communities.

They also face difficulties in accessing financing and technology which would help them adapt.

Launched in 2016, the US$20 million project is supporting around 200,000 of the most vulnerable households across seven districts – Khulna, Bagerhat, Patuakhali, Barguna, Bhola, Kurigram and Sunamganj – to adapt to the increasing challenges of climate change.

While working closely with the lowest level of local government institutions (Union Parishad) to build capacity and improve planning, it has also embraced a true grassroots approach, placing an emphasis on empowering communities in their own development, and community-led adaptation and decision-making.

The project has focused in particular on the participation of women and girls.

A LEG UP FOR THE MOST VULNERABLE: THE COMMUNITY RESILIENCE FUND

For many families in climate change hotspots, livelihood diversification– or having several ways to earn an income, despite climate variabilities and extremes – is key to resilience.

Unfortunately, many families lack the means to expand their options.

In help meet this gap, the LoGIC project created a Community Resilience Fund, providing small-scale grants (up to US$350) to households in highly vulnerable areas to enable them to undertake proven, incremental, ‘low-regret’ adaptation activities with immediate benefits for their income, food security and well-being.

The fund has targeted single-headed households, adolescent mothers, households with elderly members or with a disability, ethnic minorities, and landless households.

Since the scheme started last April, more than 17,000 households (98% of them women who have lost their livelihoods, or their existing livelihood is at risk, due to climate extremes) have received grants.

Banding together in around 1,078 localised groups, recipients have used the finance to implement a range of livelihood alternatives, from climate-resilient agriculture and livestock-rearing (for example sheep-rearing in saline and drought-prone areas) to crab cultivation, salinity-resilient aquaculture (for example poly-fish culture) and stress-tolerant agroforestry.

For many of the recipients, the returns have been impressive.

For one group of 13 enterprising farmers in the small union of Dhansagar, a switch to saline resistant sunflowers yielded Taka 32,000 in profits, as well as 40 kilograms of seeds for each of the members, which they can grind into oil for cooking and use as a nutritious feed for cattle.

The group is now developing an annual business plan and considering taking out a loan to scale-up their cultivation. With boosted confidence, they also plan to try growing saline-tolerant rice.

“We make money from selling the sunflowers and use the plants as fuel for cooking – double benefits!” – Ms. Fatema Begum, 48

The project has established a local-level mechanism to finance local action for adaptation: 72 Unions and 17,000 vulnerable households are directly benefitting – as well as 400,000 people indirectly – from US$12 million in dedicated finance.]

By introducing more climate-resilient livelihoods and practices, the project is supporting families with more stable income for the coming years.

By elevating the agency of vulnerable households in their own adaptation, the project is laying the groundwork for more sustainable communities into the future.

By feeding local experience up to the national level, the project is informing wider policy and practice and, ultimately, helping improve adaptation planning and financing systems.

As it enters its final year, the project focused on promoting ‘resilience thinking’ across the board: within households, communities, local government institutions, ministries and central government – encouraging people at all levels to be risk-aware and to take action to prevent shocks.

The project is sowing seeds for resilience well beyond its implementation.

Leaving no-one behind on the path to a more prosperous, sustainable future.