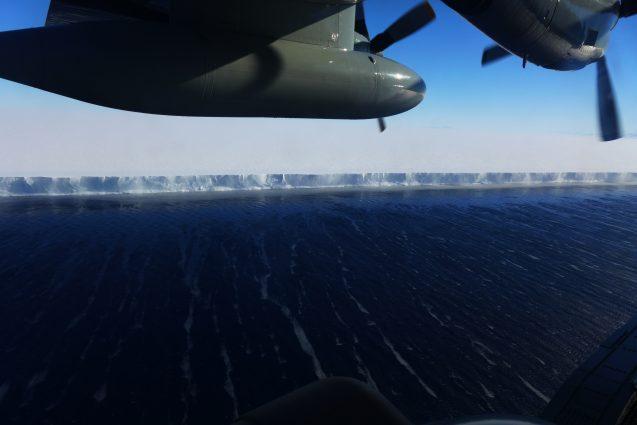 The Ross Ice Shelf, a part of the Antarctic Ice Sheet that is floating on the ocean, measures several hundred meters thick and sits over 480,000 square kilometers, approximately the size of Spain. Its magnitude, and the fact that thinning of the ice shelf will speed up the flow of Antarctica’s ice sheets into the ocean, mean that it carries significant sea level rise potential if it were to melt. Melting ice shelves like the Ross could cause seas to rise by several feet over the next few centuries.

A study just published in the Journal of Geophysical Research: Oceans helps to reveal the local factors that influence the Ross Ice Shelf’s stability, refining predictions of how it will change and influence sea rise in the future.

Prior studies on ice shelf melt have focused on warming global waters. Yet three years of Rosetta data show that the Ross Ice Shelf is melting due to local surface waters, and that the melt is happening on an unanticipated part of the shelf. These discoveries were released in a Rosetta paper published in May; the new study details the source of this strange activity.

The study comes out of the Rosetta-Ice project, a three-year-long collection of geologic, oceanographic, and glaciological data in Antarctica. The project is immense in scope, involving a multi-institutional, interdisciplinary team with specialized instrumentation to collect first-of-its kind Antarctic data.

The Rosetta team needed data on ocean temperature, salinity, depth, and circulation around the ice shelf. Traditionally, this oceanographic data is obtained in two ways: research cruises and deep moorings. Because the Ross Sea is covered by sea ice for most of the year, ship-based measurements are restricted to a short period in high Austral summer. Moored sensors, on the other hand, can collect data for several years; however, they are generally deployed no higher than 200 meters below the water’s surface, to avoid passing icebergs, so they provide a less complete picture of what’s happening around the ice shelf.

The Rosetta scientists took a new approach to gather data from the Ross Sea. They deployed six profiling floats called Air-Launched Autonomous Micro Observer, or ALAMO, floats. They fastened parachutes to the floats and launched them out of a New York Air National Guard airplane from 2,500 feet above the icy waters below. The instruments were programmed to avoid sea ice that could damage their external sensors and antennae. In addition, the team took a novel approach by “parking” the floats on the sea floor between profiling so as to limit their drifting on ocean currents.

The floats gathered temperature and salinity data from the seabed to the surface, sending data back to the team by satellite every day. Seven other floats, deployed from a ship three years earlier, provided records of ocean conditions further north, away from the ice shelf.

“In other places in Antarctica, the ice shelves are being melted by flows of global warm water from the deep ocean to the coast,” explained Dave Porter, the Lamont-Doherty Earth Observatory scientist who led the new study. “But changing melt rates for the Ross are caused mainly by a local buildup of heat in the surface layer. The question is: What dictates how much heat we build up in the summer? And the answer is that it’s mostly caused by local weather processes along the ice front.”

The team found that the main source of ocean heat causing the ice shelf to melt was sunlight warming the upper ocean after the region’s sea ice disappeared in summertime; sea ice normally reflects sunlight, whereas darker sea water absorbs it. The team also measured large amounts of fresh water coming into the Ross Sea from rapidly melting ice shelves in the Amundsen Sea to the east of the Ross Sea. Once this extra fresh water reaches the ice front, it changes how heat mixes down from the surface to the base of the ice shelf, where melting occurs, leading the team to conclude that future Ross Ice Shelf stability depends on changing coastal conditions in both the Amundsen Sea and close to the ice shelf front. View of the Rosetta-Ice project’s IcePod instrument over Antarctic sea ice from within an LC-130. IcePod scans the ice shelf from the air, and helped to detect the unusual melting patterns investigated in this study. Photo: Beth Burton/USGS

The scientists noted that increased ocean heating and ice-shelf melting could occur if the summer season, during which the sea is free of ice, becomes longer — for example, if changing local winds pushing the sea ice away from the ice shelf, or a decrease in summer cloudiness allowing more sunlight to reach the ocean surface.

Co-author Scott Springer of Earth & Space Research in Seattle said that “this new approach to collecting data from remote Antarctica’s continental shelves provides a new way to check the reliability of numerical models that we use to understand how the Antarctic Ice Sheet will respond to future changes in the oceans around Antarctica.”

The importance of local conditions near the ice front also shows that researchers must find a way to include these smaller-scale processes in global climate models, which scientists use to simulate climate impacts over the coming centuries. Testing and refining the global models will be critical in narrowing the range of predictions regarding how much ice Antarctica will lose in future climates, and how high seas will rise.

To co-author Helen Amanda Fricker of the Scripps Institution of Oceanography at the University of California San Diego, the study also shows how important it is to study relatively stable areas such as the Ross ice shelf. “Many current field programs are focused on parts of Antarctica that are known to be changing, but we must also collect observations in regions that are not changing to understand how the ice sheet works as a whole,” she said. “This is critical because there remains a large range across predictions of Antarctica’s contribution to sea level in future climates.”

Melting ice sheets may cause ‘climate chaos’ according to new modelling

Sea level rise: West Antarctic ice collapse may be prevented by snowing ocean water onto it

Arctic ice loss is worrying, but the giant stirring in the South could be even worse