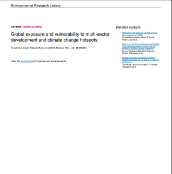 New research identifying climate vulnerability hotspots has found that the number of people affected by multiple climate change risks could double if the global temperature rises by 2°C, compared to a rise of 1.5°C.

The team, led by IIASA Energy Program researcher Edward Byers, investigated the overlap between multiple climate change risks and socioeconomic development to identify the vulnerability hotspots if the global mean temperature should rise by 1.5°C, 2°C and 3°C by 2050, compared to the pre-industrial baseline. Since those in poverty are much more vulnerable to climate change impacts, knowing where and how many vulnerable people are at high risk is therefore important for creating policies to mitigate the situation.

“Few studies have consistently investigated so many overlapping climate and development challenges,” says Byers. “The research considers both different global mean temperature rises, such as the differences between 1.5°C and 2.0°C, and uses new socioeconomic datasets of income levels and inequality, to identify where and to what extent the most vulnerable in society are exposed to these climate-development challenges.”

Multisector risk is one where the risk goes beyond tolerable in at least two of the three main sectors. At lower temperatures, hotspots occur primarily in south and east Asia, but with higher global temperatures, hotspots further spread to Central America, west and east Africa, the Middle East and the Mediterranean. The actual global land mass affected is relatively small, at 3-16% depending on the scenario. However, the areas at highest risk tend to be densely populated. At 1.5°C of warming, 16% of the population of the world in 2050, 1.5 billion people, will have moderate-to-high levels of multisector risk. At 2°C of warming, this almost doubles to 29% of the global population, 2.7 billion people. At 3°C of warming, that figure almost doubles again, to 50% of the population, or 4.6 billion people.

Depending on the scenario, 91-98% of the exposed and vulnerable population live in Asia and Africa. Around half of these live in south Asia alone, but Africa is likely to face greater risks as the least developed region with high social inequality.

With the world already around 1.0°C warmer than pre-industrial averages, in 2015 global leaders agreed in Paris to limit average warming by 2°C, with the ambition of limiting warming to 1.5°C if possible. The large differences, the researchers note, even between warming of 1.5°C compared to 2°C, are striking, and underline the multidimensional risks of climate change and the need to keep warming as low as possible.

Targeting socioeconomic development in hotspot areas is particularly important for reducing vulnerability in places where impacts will be most severe. Sustainable development in hotspot areas could reduce the number of people who are exposed and vulnerable by an order of magnitude, from 1.5 billion to 100 million, compared to the high inequality scenario. The poorest in society will likely be disproportionately impacted by climate change, and greater efforts to reduce inequality and promote adaptation are urgently needed.

“The research will be most relevant to policymakers and others looking to understand the benefits of keeping the average global temperature rise to 1.5°C rather than 2°C, as well as providing insights into the regions most at risk across different sectors. The poorest and most vulnerable countries are most at risk and this work will aid to identify integrated, cross-sectoral approaches and target resources for maximum impact,” says Astrid Hillers, senior environmental specialist at GEF.

Keywan Riahi, IIASA Energy program director, adds: “The research indicates locations where meeting the Sustainable Development Goals (SDGs) is not only important but also very challenging, and shows the substantial importance of targeted poverty reduction that is required in some regions to reduce vulnerability.”

The research is part of a large ongoing partnership project, Integrated Solutions for Water Energy and Land (ISWEL), between IIASA, GEF, and UNIDO, who co-developed the research and are co-funders of the project.

Climate change will worsen US poverty

Are policy makers ready to prioritise climate resilience for the poorest?

How can the world reduce disaster losses for the poor?