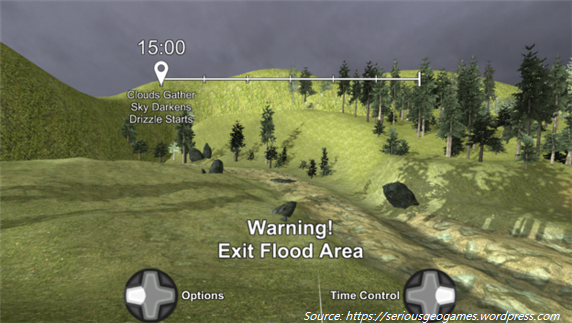 If you came to last October's Into the blue science showcase in Manchester you may have seen me and my colleagues brandishing headsets and offering to immerse you in a dangerous virtual river valley with our game Flash Flood!

Watch as the rain gets heavier and the water begins to rise, before a flash flood bulldozes its way down the valley, destroying everything in its path. Then see the damage it's left in its tracks, damage the valley will take decades to recover from.

This is Thinhope Burn, Northumberland, which flooded on 17 July 2007. This small valley was struck by the type of thunderstorm we get on hot summer days and, although it only affected a small area for a few hours, it was enough to cause the sides of the valley to slide into the river. Mud, stones, rocks and plants collected with the flood water and thundered down the valley like a wall of water, moving rocks and uprooting trees in what we call a flood bore.

The NERC Flooding from Intense Rainfall (FFIR) programme commissioned the game to help us share our research. FFIR has brought together scientists from universities across the UK, working with partners like the Met Office and the Environment Agency, to improve our ability to forecast the type of storm event shown in Flash Flood! We know the conditions they form in tend to be localised and can last for as little as a few minutes. However, their small area and their short lifespan make it nearly impossible to forecast exactly where and when they might happen.

Flash floods happen in a small area in a short timespan making them nearly impossible to predict.

I started SeriousGeoGames in 2014 to design games specifically for events like Into the blue. Once you have someone sitting down in the headset, waving their head around, you quickly draw a crowd. Over a thousand people tried the game at Into the blue and we were chuffed to come third in a vote of the public's favourite exhibit. It's very rewarding to see just how much people enjoy it, young and old.

Each of our games has a serious side. Each is built using data and tools drawn from our research using measurements from a real valley and is based on real floods. We hope people will engage with the flood risk in their own areas, and use this information to be better prepared.