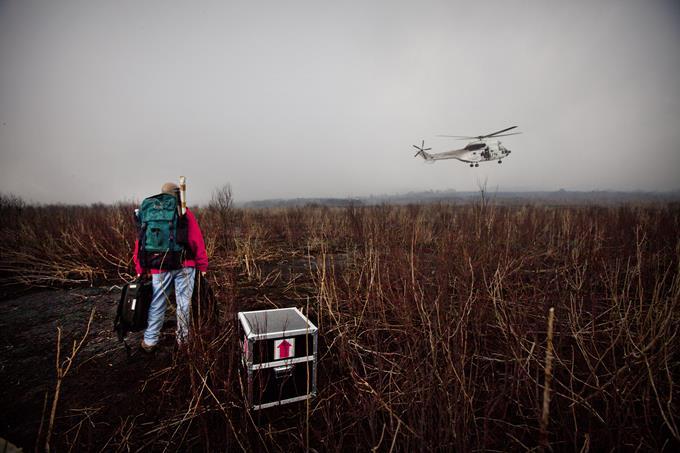 On June 15, 1991, Mt. Pinatubo in the Philippines erupted in a massive explosion. Science and international cooperation enabled officials to evacuate more than 75,000 people through advance notification.

In the fall of 2010, Indonesia’s Mt. Merapi had its largest eruption in over 100 years. More than 70,000 people were able to get to safety before flows of hot rocks, ash and volcanic gas rushed down the mountain toward their villages.

There are approximately 1,550 potentially active volcanoes around the world, but only one international volcano crisis response team that can rapidly deploy experts, donate and install monitoring equipment and work with counterparts to prevent eruptions from becoming disasters: the Volcano Disaster Assistance Program (VDAP).

This is a joint program between the USGS and U.S. Agency for International Development’s Office of U.S. Foreign Disaster Assistance (USAID/OFDA).

August 6th marks the 30-year anniversary for VDAP. To recognize this milestone, we are highlighting some of the major responses, showing how the program has helped save countless lives.

Out of Tragedy Came Thousands of Lives Saved

VDAP was established in 1986 in response to the tragic eruption of the Nevado del Ruiz volcano in Colombia that killed more than 23,000 people. Recognizing that the tragedy could have been averted with assistance before the eruption, the USGS and USAID/OFDA formed VDAP.

The USGS provides scientific and technical expertise for volcano monitoring, eruption forecasting and response. USAID/OFDA is responsible for leading the U.S. government’s response to disasters overseas and has provided more than $33 million in support for VDAP since it was established.

VDAP works to support in-country scientists and agencies at the invitation of a host country. Since the program began, teams have deployed in response to 30 major crises, assisted counterparts with hundreds of additional volcanic events and strengthened monitoring and response capacity in 12 countries.

VDAP brings nations together in scientific collaboration to address common problems. In doing so, the program builds international partnerships and enhances relations between the United States and other nations.

Both crisis response and capacity building are fundamental components of VDAP. During a crisis, affected countries may request VDAP assistance either on-the-ground or remotely. Depending on the situation, VDAP will supply satellite data, donate monitoring equipment and provide many more support functions. The program also trains counterparts and helps countries establish and/or enhance their own technical and intellectual capability to prepare in advance and manage future volcano crises. Additionally, VDAP supports infrastructure development, such as installing scientific instruments and monitoring networks.

This work also has an important domestic return. The United States and its territories have more active volcanoes than any country except Indonesia. Access to volcanoes worldwide and collaborating with international scientists improves our nation’s capabilities to understand potential threats and develop mitigation strategies that are most effective in preventing disasters here at home.

Reflecting on the Past 30 Years

A few examples of past and ongoing efforts are outlined below, and you can learn more by visiting the VDAP website.

Momotombo volcano in Nicaragua had its first eruption in 110 years on December 1, 2015. An increased eruptive period began in February with two vigorous explosions that caused ash to fall on nearby communities. Of high concern is the geothermal plant located on the flank of the volcano, and VDAP’s help was requested by the Instituto Nicaragüense de Estudios Territoriales to evaluate and address the potential dangers. VDAP assistance has also included advising local scientists on eruption forecasting and sulfur dioxide volcanic gas monitoring as well as training and providing equipment to ensure real-time delivery of volcano monitoring data.

Indonesia is the world’s most volcanically active nation, with numerous eruptions each year and several million people living directly on the flanks of the volcanoes. VDAP has been assisting the Indonesian Center for Volcanology and Geologic Hazard Mitigation (CVGHM) since 2004 to improve its monitoring networks. VDAP seismologists have provided training both in Indonesia and at the USGS Cascades Volcano Observatory in Washington State.

In October of 2010, Mt. Merapi had its largest eruption in more than 100 years. Thousands of lives were saved thanks to preemptive evacuations. VDAP assisted with situational analysis, including the use of satellite data to identify the imminent hazard and help Indonesian officials decide to evacuate those nearby.

“The work done by VDAP in Indonesia is not only focusing on instrumental development, but VDAP has also been very important in developing scientific capacity of the Indonesian volcanologists and thus helpful for a better decision making process during a volcanic crisis,” said Pak Kasbani, head of CVGHM. “The work of VDAP within our cooperation is therefore deeply appreciated and will make a positive difference for the future of volcano monitoring development in Indonesia.”

In 2008, Chaitén volcano in Chile re-activated and an entire town of about 5,000 people evacuated within 48 hours of the eruption onset. Soon after, VDAP collaborated with Chile’s Servicio Nacional de Geología y Minería to install the first radio-telemetered monitoring instruments at Chaitén, allowing for transmission of information to scientists for rapid analysis. Chile has more than 122 active volcanoes and this eruption prompted a new national plan to ensure adequate monitoring of the country’s hazards. This plan was funded by the government of Chile and is based on the USGS’s U.S. National Volcano Early Warning System.

After being dormant for hundreds of years, Nevado del Huila in Colombia erupted in 2007 and 2008. Before both eruptions, Colombian officials at the Servicio Geologico Colombiano reached out to VDAP for assistance. Collaboratively, they improved monitoring and established warnings that enabled evacuations before mudflows raced down into populated valleys. The resulting success demonstrates the dramatic progress made in Colombia since the 1985 disaster at Nevado del Ruiz.

In the spring of 1991, VDAP assistance was requested to help monitor Mt. Pinatubo in the Philippines. VDAP shipped an entire volcano monitoring network and worked with the Philippine Institute of Volcanology and Seismology to install the network and issue warnings prior to the eruption. Before Mt. Pinatubo’s massive eruption in June of the same year, this network allowed for timely evacuations that saved thousands of lives and several billions of dollars in U.S. equipment. Evacuations were carried out by the government of the Philippines and U.S. military officials at Clark Air Base and nearby U.S. Naval Base Subic Bay.

VDAP is one of several finalists nominated for the 2016 Service to America Medals. These awards honor excellence in our federal workforce and are known as the “Oscars” of government service. The final winners will be announced September 20 and VDAP’s nomination is listed under the name of the current Chief of the program, John Pallister. Go online to learn more and vote for the People’s Choice Award.

Learn more about USGS science to monitor and study volcanoes in the United States and internationally.