Women take on floods and hunger in rural Pakistan 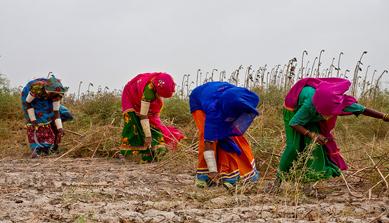 "All I can afford is rice, so that's what I feed my eight children every day and they are just not getting enough nutrition," said the weary-looking widow, aged around 40.

Rajanpur is one of the poorest districts in the otherwise prosperous central province of Punjab, where the Panjnad River flows into the Indus River, Pakistan's lifeline.

The convergence of the rivers in southern Punjab meant most of Rajanpur was submerged in the 2010 floods, as water from unprecedented rainfall up north rushed down the Indus.

Amina's husband helped rescue many people hit by the flooding, but after he died she sold his boat. "Now I work as a labourer on other people's land, growing crops like sugarcane and cotton. We lost our home and our livestock in the flood," she said.

Most of her neighbours in the riverine areas of Rajanpur district, which straddles the Indus, do not own land either and are struggling to recover from the flooding.

Many are in debt due to high interest rates on loans to buy farm inputs such as seeds, fertilisers and pesticides.

Unlike in the past, the district is now affected by floods almost every year, either from the river overflowing or torrents cascading down the Suleiman mountains after heavy monsoon rains.

Power to the farmers

Help Foundation, a local NGO, has been working for over a decade with communities in the area, encouraging villagers to form groups that help families like Amina's feed themselves.

There are more than 30 such groups, each with an association to support farmers, according to Saad Zafar, a social organiser with Help Foundation, which is a member of the Indus Consortium, a platform that builds community resilience.

Last August, the consortium launched a campaign in five riverine villages in the area, funded by Oxfam, aimed at putting more power in the hands of farmers, particularly women.

In the nearby village of Mohammed Akram, the impact of the training the women have received is clear.

"We have planted trees which will protect the embankments and help us during floods, and we started planting kitchen gardens near our homes where we can grow our own vegetables," said Bakhto Bibi, secretary of the community organisation.

While many aid groups work with farmers in Pakistan, few link climate change with food security. But Bakhto says she knows what is behind the flooding in her district.

"Global warming is raising temperatures, which is causing intense rainfall in the area - it is because of all the smoke from factories and cars around the world," she said.

People are adapting to the annual floods by building their mud homes on higher ground, artificially raised by bulldozers piling up earth, so their livestock and belongings stay safe.

They are also spreading the message through theatre. A play on climate change, performed recently by the community group at a school, was attended by all the local women, Bakhto said.

Women have also decided to form committees to start discussions with the government about obtaining their own land.

"We have been living here for 40 years and hardly own any land. Since most of the area around here is owned by the state, it should be allotted to us so we can increase our agricultural production," Bakhto said.

The women, along with men in their group, have already met with the Rajanpur District Coordination Officer, Ghazi Aman Ullah, to talk about land rights and maintaining embankments to stop flooding. He has promised to look into their demands.

"I think the biggest improvement has been that we are all united now," said Ameer Bibi who lives in the same village.

"We want to put pressure on the government to change its policies - it should set up institutions to help us farmers," she said.

Examples of women's empowerment are rare in Pakistan. Conservative elements, led by a fierce clergy, usually oppose such efforts in rural areas, making even liberal politicians wary of supporting them.

Help Foundation has enjoyed more success as it is an established NGO founded back in the 1970s that has won people's trust, especially during the 2010 floods when it provided relief and rehabilitation.

"Crops, floods and poverty are all interlinked. The government should ask us what is happening on the ground," said Ayesha Bibi, a feisty widow in her 60s who farms her own two-acre plot and recently travelled to Bangladesh with Oxfam for a regional meeting on climate change.

"It is actually the responsibility of the government of Pakistan to help us, not the foreign-funded NGOs who have kept us from starving."

More on the Indus Consortium