Researchers examined the number of households unable to pay for damages from coastal flooding to reveal how sea-level rise could threaten the fabric of Bay Area communities over the next 40 years.

Rather than waiting for certainty in sea-level rise projections, policymakers can plan now for future coastal flooding by addressing existing inequities among the most vulnerable communities in flood zones, according to Stanford research. 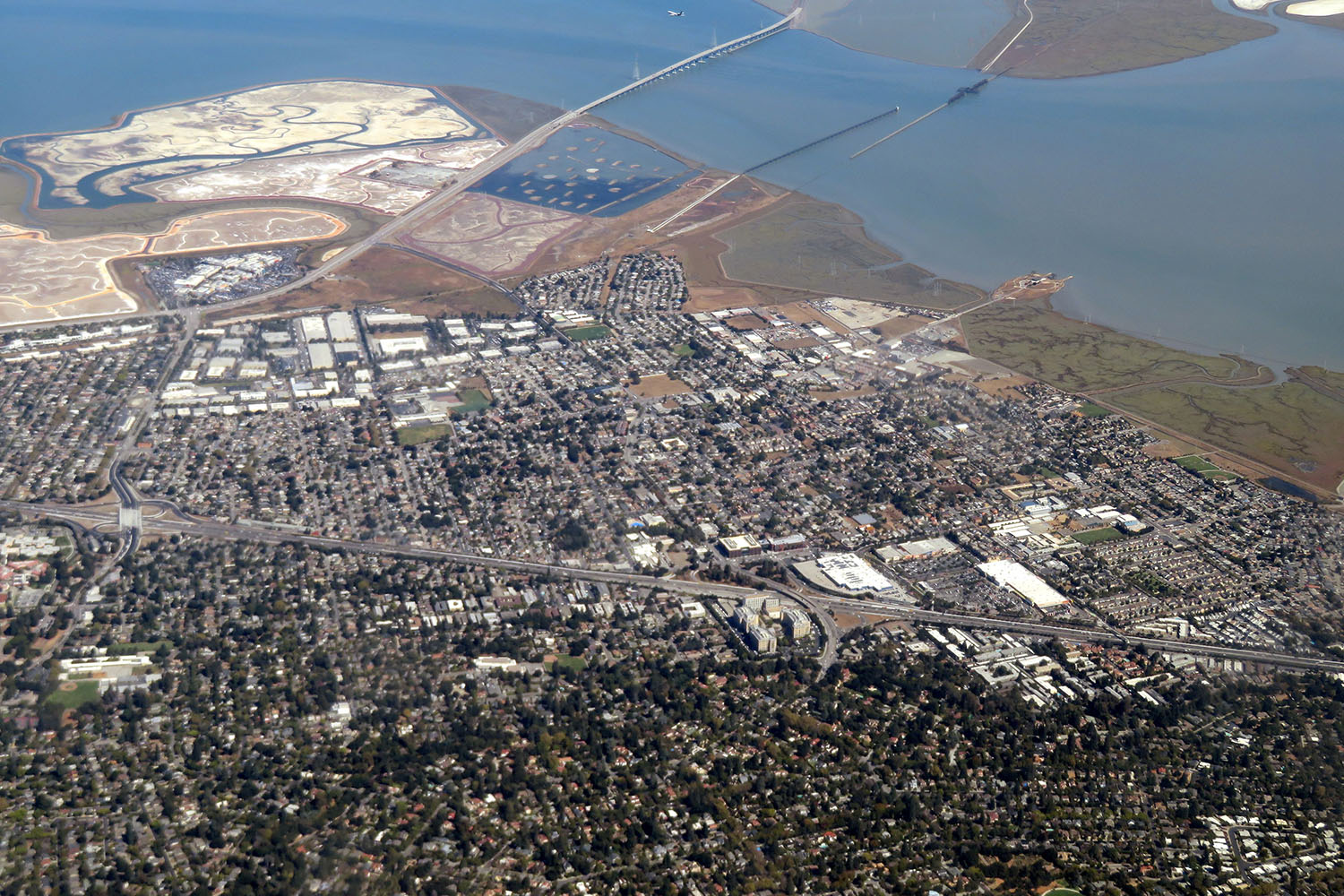 An aerial view of East Palo Alto, which borders San Francisco Bay. New research shows about half the households in East Palo Alto are at risk of financial instability from existing social factors or anticipated flooding through 2060. (Image credit: Wikimedia Commons)

Using a methodology that incorporates socioeconomic data on neighborhood groups of about 1,500 people, scientists found that several coastal communities in San Mateo County, California – including half the households in East Palo Alto – are at risk of financial instability from existing social factors or anticipated flooding through 2060. Even with coverage from flood insurance, these residents would not be able to pay for damages from flooding, which could lead to homelessness or bankruptcy among people who are essential to the diversity and economic function of urban areas. The paper was published in the journal Earth’s Future on July 12.

“These are workers that make a city run, they’re the heart and soul of an urban operation. If you displace a significant majority too far outside the urban area, the functionality of that city crumbles,” said senior co-author Jenny Suckale, an assistant professor of geophysics at Stanford’s School of Earth, Energy & Environmental Sciences (Stanford Earth). “How can we make sure that we provide a future to these communities that does not entail their disintegration?”

Flood damage estimates are typically calculated by civil engineers in terms of monetary damage to physical structures. With their new model, called the Stanford Urban Risk Framework (SURF), the researchers bring a human-centered approach to risk assessment that focuses on the residents most likely to lose their livelihoods when water inundates their homes. While every household within the projected flood plain will be burdened by flood damages, the socioeconomic context determines how harmful the costs will be. In several coastal communities in San Mateo County, more than 50 percent of households will be facing financial instability.

“If you just look at the dollar amount, you’re missing one major component of the problem,” Suckale said. “What might be a nuisance in some communities is life-changing in other communities – it’s really about the proximity to a tipping point.”

The researchers determined which communities are near a fiscal tipping point by calculating their social risk, or financial instability, a metric intended to complement existing assessments of monetary risk from hazards. They overlaid coastal flood maps and building footprints with structural information, incorporated projected annual damages from sea-level rise and estimated household discretionary income based on labor and economic data in order to calculate losses based on census block groups – geographical units used by the U.S. Census Bureau to publish demographic estimates.

“It was surprising to see in the data how much more lower-income households were affected as a proportion of their income and just how unsustainable it is for those types of households to absorb these costs,” said lead study author Avery Bick, a PhD student with the Norwegian Institute for Nature Research who worked on the project as a graduate student at Stanford.

Despite uncertainty over the magnitude of future climate change, researchers agree that sea-level rise will increase coastal flooding – a hazard that residents from Foster City to East Palo Alto have already experienced in the past several decades. Many of the neighborhoods with the highest social risk comprise single-parent households and are more racially diverse than the San Mateo County average, according to the research.

“Climate change isn’t just about getting hotter or sea-level rise – it’s literally going to change the entire fabric of society, especially if we continue to ignore it,” Bick said. “This gave me a sense of how vulnerable the social fabric is to change and how we need to be proactive; otherwise it will change in favor of those that have more resources.”

The researchers collaborated with local stakeholders to develop an equitable approach to sea-level rise adaptation planning. Through conversations with organizations like the San Mateo County Office of Sustainability and the U.S. Army Corps of Engineers, as well as community-based groups like Climate Resilient Communities, El Concilio and North Fair Oaks Community Alliance, they learned that what was missing from the climate discourse was a framing of dollar-amount damage relative to what people are able to pay. The team’s approach involved a mind shift, from the amount of money you lose to the value of the goods and services you can no longer purchase because of the disaster, said study co-author Derek Ouyang, a geophysics lecturer at Stanford Earth.

“Any investment now can be directly linked to the resilience that prepares communities for future climate hazards, whatever they are,” Ouyang said.

Because San Mateo County includes both very wealthy and low-income residents, averaging the costs of flooding in comparison to the income of its residents at the county scale “makes it look like you don’t have much of a problem,” Suckale said. By assessing impacts at a smaller scale, however, the researchers were able to highlight the areas of concern in a way that is more directly useful to policymakers.

The co-authors hope this new quantitative method for assessing social risk on a census block group scale can be used in other regions vulnerable to coastal flooding or for understanding different climate hazards through an equitable lens.

“I think it’s useful to have a metric of social risk that is entirely agnostic of the actual hazard, because then we can just improve the ability of the household to absorb the disruption, no matter what it is,” Suckale said.