By Pierluigi Cara and Cosmo Mercuri

Contribution of the National Map of Structural Aggregates to the identification of historical and artistic emergencies for civil protection purposes.

In September 2020, experts from the Cultural Heritage Group of the Department of Civil Protection – DPC, already involved in the implementation of PROCULTHER, were invited to the virtual seminar “Hazard maps and geo-cataloguing of cultural heritage: advantages and limitations for Emergency Planning”, organised in the framework of the project Cultural HEritagE Risks and Securing activities – CHEERS. The reason for this collaboration lies primarily in the overall objectives sought by both CHEERS and PROCULTHER, and in the acknowledgment of the value and importance of exchanges of skills and knowledge between experts working in the field of cultural heritage protection in emergencies.

CHEERS aims at fostering a closer cooperation between Civil Protection and Cultural Heritage and Sites managers, with a special focus on prevention and emergency planning at cross-border level. The project is co-funded by the European Regional Development Fund of the European Union through the European Territorial Cooperation Programme (ETC) Alpine Space and is implemented by a Consortium made up of 12 Partners from 6 Alpine countries (Austria, France, Germany, Italy, Slovenia and Switzerland). Project partners are providing their expertise to support the local Alpine communities for the development of an adequate regulatory framework, expertise and operational capacities aimed at improving the management of the activities for securing their cultural heritage.

The September meeting was an opportunity for experts in the fields of risk map production (hydraulic, hydrogeological and interface fire), cataloguing and mapping of cultural heritage and emergency planning, to point out strengths and weaknesses in the integrated use of existing datasets. The skills and competences of our experts was requested to facilitate the debate on the production of geo-referenced risk maps and catalogues of cultural heritage. In particular, they examined the experience gained by the working group of the Catholic University of Milan – CHEERS partner, which is working in collaboration with the DPC and the Superintendence for Cultural Heritage of the Autonomous Province of Trento – for securing cultural heritage sites and assets exposed to the flooding scenario of the Adige River in the territory of the Trento municipality.

In this context, among others, the issue of the accurate positioning of historical and artistic heritage at risk emerged, possibly in polygonal form and accompanied by adequate information to facilitate their identification for subsequent re-use of emergency planning and management purposes. On this matter, the participating Department experts were given the opportunity to share their experiences.

The DPC in collaboration with the Italian Regions and Autonomous Provinces, has in fact drawn up the National Map of Structural Aggregates to support the activities of damage survey, emergency intervention and accessibility for buildings following an earthquake event (1). The cartography was carried out in numerical form and was derived from the Technical Cartographies or from the Regional Geo-topographical Databases in vector format, at a scale of 1:5000/1:10000, regarding the buildings.

The availability of this digital mapping tool allows its profitable use, both during emergency management for post-event damage detection, and – more generally – in the prevention phase for civil protection and emergency planning. In addition, given its extremely accurate level of detail and its consolidated identification system (2), it allows for a consistent localization of each cultural property within each aggregate as an autonomous structural unit and its harmonised identification.

The advantages of this system consist of a homogeneous geographical localization at national level and a relative harmonised identification at national level. The reference to this cartography can also facilitate the correct correspondence between the same assets available in different systems and catalogues that are uneven in terms of localization and denomination, as well as in terms of identification. In order to support the correct polygonal geometry of the structural unit relative to the asset of historical and artistic interest within the structural aggregate, the original regional and/or cadastral cartography can be used, as well as any available detailed aerial maps.

In the absence of such elements, it will be necessary to carry out an ad hoc survey on the ground, always foreseen during the management of the emergency, following reports of damage. All this also with the aim of facilitating the development of more detailed risk scenarios useful for the elaboration of specialised emergency plans for the protection of cultural heritage.

A further advantage of the national mapping of aggregates lies in providing a standardised cartographic base useful for the perimeter of homogeneous built areas, first of all for the historical centres, deriving from territorial governance instruments, specific studies or from sectorial research on risks. The use of a common language starting from the technical aspects, as illustrated here regarding cartography and more generally derived from the activities ongoing under the PROCULTHER project, is the first step to set the best procedures for decision-makers and for the experts working on the field.

The image here below (referring to the city of Trento) displays the structural aggregates with the blue contour and with their identification code, derived from the thematic map “Buildings” of the Provincial Technical Map ed. 2013. The background image is taken from the 2015 digital orthophoto of the Autonomous Province of Trento. For the St. Virgil Cathedral, there is a code of the structural aggregate containing it (04=Region Trentino Alto Adige, 022= Province of Trento, 205=Municipality of Trento, 6229=aggregate number,00=other identifier) and another identifying the relative structural unit according to the appropriate code for religious buildings, i.e. the prefix 9 (901=building number). 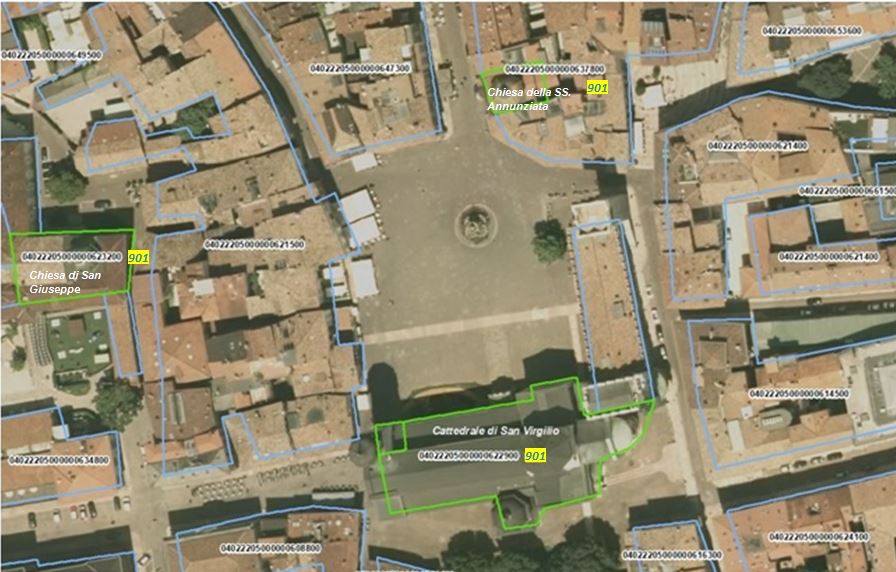 Background image: WMS Service of the Ortophoto PAT 2015 RGB of the Autonomous Province of Trento (CC BY 3.0 IT); polygonal limits (light blue) and identifiers of the DPC Structural Aggregates Mapping, derived from the thematic technical map “Buildings” of the Autonomous Province of Trento – CPT 2017 1:10.000 (CC BY 3.0 IT) and polygonal limits (green) of churches from the same CPT 2017″