Source(s)
Food and Agriculture Organization of the United Nations - Headquarters 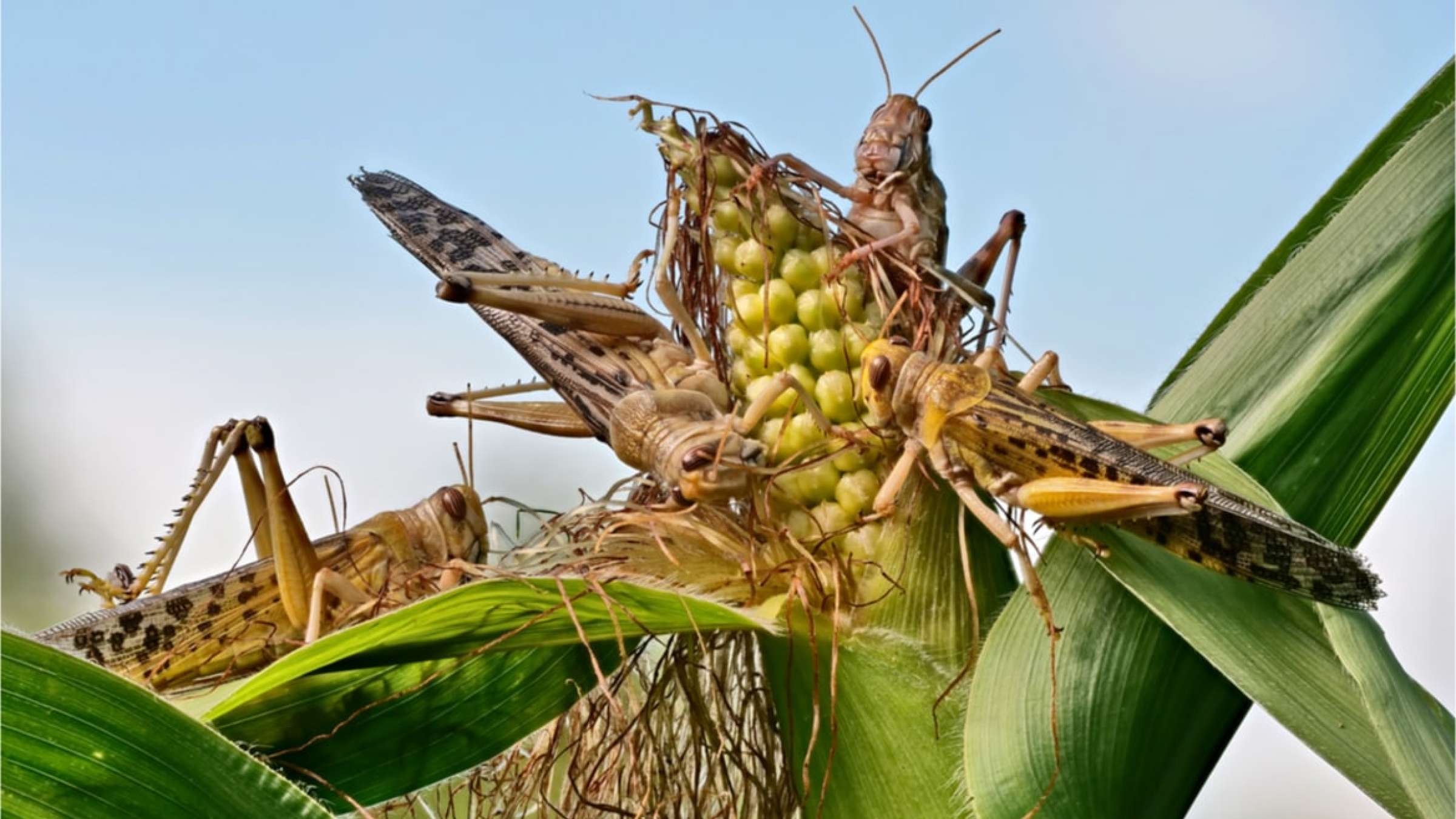 What is the Desert Locust situation in East Africa/Kenya right now?

The locust situation is currently very quiet. We have declared the upsurge is over in the entire region for two main reasons: first, we had a massive and aggressive locust campaign in close cooperation with the governments. Second, the region is facing a severe drought situation, which means that conditions are no longer favourable for the Desert Locust to breed. It does not mean that there are no Desert Locusts in the region; FAO is still monitoring their presence. We are back to what we call the recession of Desert Locust, which means they are still present but they are under control and do not pose any threat to the region – not at all in Kenya neither in Somalia nor in Ethiopia.

Kenya is currently free from Desert Locust after two consecutive invasions in 2019 and 2020. We were able to come together and control the invasions. This happened after 70 years without seeing any locust in this country. No one was prepared to address the invasion of such magnitude. FAO was the only UN agency that had the expertise and knowledge that made it possible to address the challenges posed by the Desert Locust. We were able to mobilize the necessary expertise and resources and provide timely forecasts that helped Kenya in terms of training, surveillance, control, spraying the areas with pesticides, while minimizing the risk for the communities and their crops.

Although Kenya is currently free from Desert Locust, it does not mean that we can afford to lower our guard. As we know, Desert Locust is a migratory pest that knows no boundaries, and we have to remain vigilant and continue to do surveillance and control.

How were locusts brought under control? What was FAO’s role?

The problem that we faced in a number of countries, especially those that are not the frontline countries like Kenya, is that they did not have the adequate capacity to address the threat. As you can imagine, in any country in the world, it is very hard to maintain capacity to respond to a shock that happens only every 70 years as in Kenya’s case. Just to compare with COVID-19, the world was not prepared for it because it was abnormal and for the first time. Here, we somehow saw the same: when you do not see an invasion for long periods of time you have a generational gap of expertise and it is hard to invest resources in preparedness in something that is unlikely to happen, especially if you have competing priorities such as droughts, floods and other shocks.

What FAO did was to create a minimum capacity for governments to conduct surveys and control operations. We have trained 3 800 people in the entire region on how to use innovative applications such as eLocust3 to recognize and report on Desert Locust. We helped the Government to establish a national locust information office to manage the data for daily field operations. We also purchased vehicles and motorbikes for the governments to be more mobile. We procured pesticides, provided people with safety protection kits including masks, gloves, overclothes and glasses. And, finally, we hired a number of aircrafts and helicopters to increase capacity on surveillance and control.

This was a combination of efforts and teamwork, well-coordinated by FAO under the strong leadership of the Government. Controlling Desert Locust was a complex task, and the magnitude of the invasion really required a lot of resources. We worked in close collaboration with national Government, counties at the subnational level, as well as with the communities and the press to raise awareness about the situation. FAO had to train people, particularly youth, on how to use new technologies such as eLocust3 to be able to report on the locust upsurge.

The Government of Kenya with the support of FAO, managed the first and second wave of the Desert Locust invasion. FAO raised about $24 million from 18 donors, resources that were used to procure insecticides, vehicles, spray equipment and facilitate human resource. In terms of operation, the resources were used to facilitate survey and control activities and further used to support livelihood recovery. By the end of the two waves, a total of 19 million hectares had been surveyed out of which 212 000 hectares were sprayed (treated). Spraying protected 320 000 hectares that could have been invaded. These data show the role that FAO played in saving crops and lives. The control efforts averted the loss of more than 11 000 hectares of crops worth around $3.4 million. Consequently, more than 75 000 people were able to meet their annual cereal needs and almost 5 500 households were able to feed their livestock and produce milk, to improve dietary diversity and nutrition.

Did the response in East Africa also involve protecting livelihoods?

Yes, we had reviewed the lessons of the 2003-2005 upsurge in West Africa where one of the recommendations was that we should not focus only on surveillance and control but at the same time invest in protecting livelihoods. In the past, it used to be done one after the other in a sequential manner. But we learned that it had to be simultaneous. Less grazing areas for livestock means less meat and less milk for children under five years, in particular. There was a risk of malnutrition that we averted through livelihood intervention, distributing animal feed, seeds and through cash transfer to affected people. Cash injection was quite important for stabilizing livelihood by providing people with the means to buy food especially for those who lost crops.

Do desert locust upsurges occur with regularity? Is it possible to prevent their occurrence in the future?

Despite what many people think, upsurges are not cyclical; however, Desert Locust can always come back. Thus, surveillance systems and early actions are of paramount importance. If climatic conditions are favourable for Desert Locust to breed and if countries do not survey the areas, there is a risk that Desert Locust will breed and multiply. The more often surveys are conducted, the lower is the risk of unnoticed breeding. Now the surveillance capacity is in place. So, yes, Desert Locust could come back if they were breeding in areas that could not be surveyed or controlled mainly for security reasons rather than the lack of surveillance capacity in countries like Yemen and parts of Somalia.

How does FAO’s anticipatory approach help to avert severe locust crises and other shocks?

Eastern Africa in particular is not spare from shocks whether they are human-induced or natural disasters – we have conflicts and displacements, droughts in Ethiopia, Kenya, Somalia and floods in South Sudan. We see a significant increase in food commodity prices, which is global, of course. We have a conjunction of factors meaning that resilience building is paramount. Rural people, in particular, are never far away from shocks. On average, in the past ten years they never enjoyed one full year without being hit by a shock. It means that if you are not able to work in an anticipatory manner through a clear resilience agenda the probability that people will be affected by shocks is high.

For example, if you do not protect pastoralists from Desert Locust or drought, it would ravage rangelands and animals will die. When a pastoralist loses his/her productive assets, the probability that this person re-engages in the productive activity is close to zero. To recapitalize assets, it takes minimum five years, and in the meantime you can be hit by another shock. Anticipatory action is exactly meant to protect livelihoods and prevent significant loss of productive assets.

FAO really helped the Government of Kenya to build the capacity that now exists to be able to address similar invasions should they happen again. In close collaboration with the Government, FAO was able to establish structures and capacities, organize field teams, mobilize resources and roll out in terms of continuing training and reporting procedures. We need to deal with the growing severity and intensity of the impacts of climate change. The only way we can mitigate them is to use early warning systems that enable us to detect disasters in advance and act as early as possible.

What is the current drought situation in the Horn of Africa?

The drought is a tragedy in the region. It is not the first time the region is hit by a drought. In 2011, we already had one of the most severe droughts in the region that led to the death of 260 000 people in Somalia alone. At that time, we said early warning did not work and we have learned the lesson. The next drought was in 2016-2017 and the international community at that time was still very much under the shock of the failure. Everyone reacted quickly – all the development programmes were re-prioritised and donors came at scale to respond. At that time, we averted the catastrophe.

This time, the alert was there, all warning systems have been activated and worked well. Kenya declared a drought emergency in September 2021;  Somalia - in of April 2021, more than a year ago. But funding was not sufficient to address the magnitude of the crisis.

The impact is dramatic. Already 15 million people have been affected by the drought across Ethiopia, Kenya and Somalia. We have reached 85 percent of the time within the long rains’ season but the region has received only 50 percent of the rain. It is clear by now that the region is facing its fourth consecutive below average rain season. And yet we have not even experienced the full impact of the Ukraine crisis, which will materialise during the second half of the year, both in terms of prices, food and fertilizer supplies. The worse is still to come, and by the end of the year the region will be in a dramatic situation because of the cumulative effects of all the shocks.

The drought hit the same counties, the same areas that were previously affected by the Desert Locust. This was exacerbated by the impact of COVID-19 that affected the country. In Kenya, it is currently affecting 17 out of 23 counties. We see the sufferings of rural communities. Most of the pastoralists and agropastoral communities have lost their assets, livestock and livelihoods. It is a really severe drought that is intensifying because of the impacts of climate change. We are talking now about 3.5 million people that are affected and this number will grow if the situation does not improve. We, at FAO, together with other UN agencies are responding to this emergency

FAO is bringing over expertise to save the livestock since it is the only source of food and income for many rural communities. We have been providing range cubes and vaccines for animals, restoring water holes. This is combined with unconditional cash transfers to give some resources to the communities and diversify their diet. But it is not easy, the funding is not there to effectively respond to the drought emergency despite several appeals the UN have launched for Kenya.