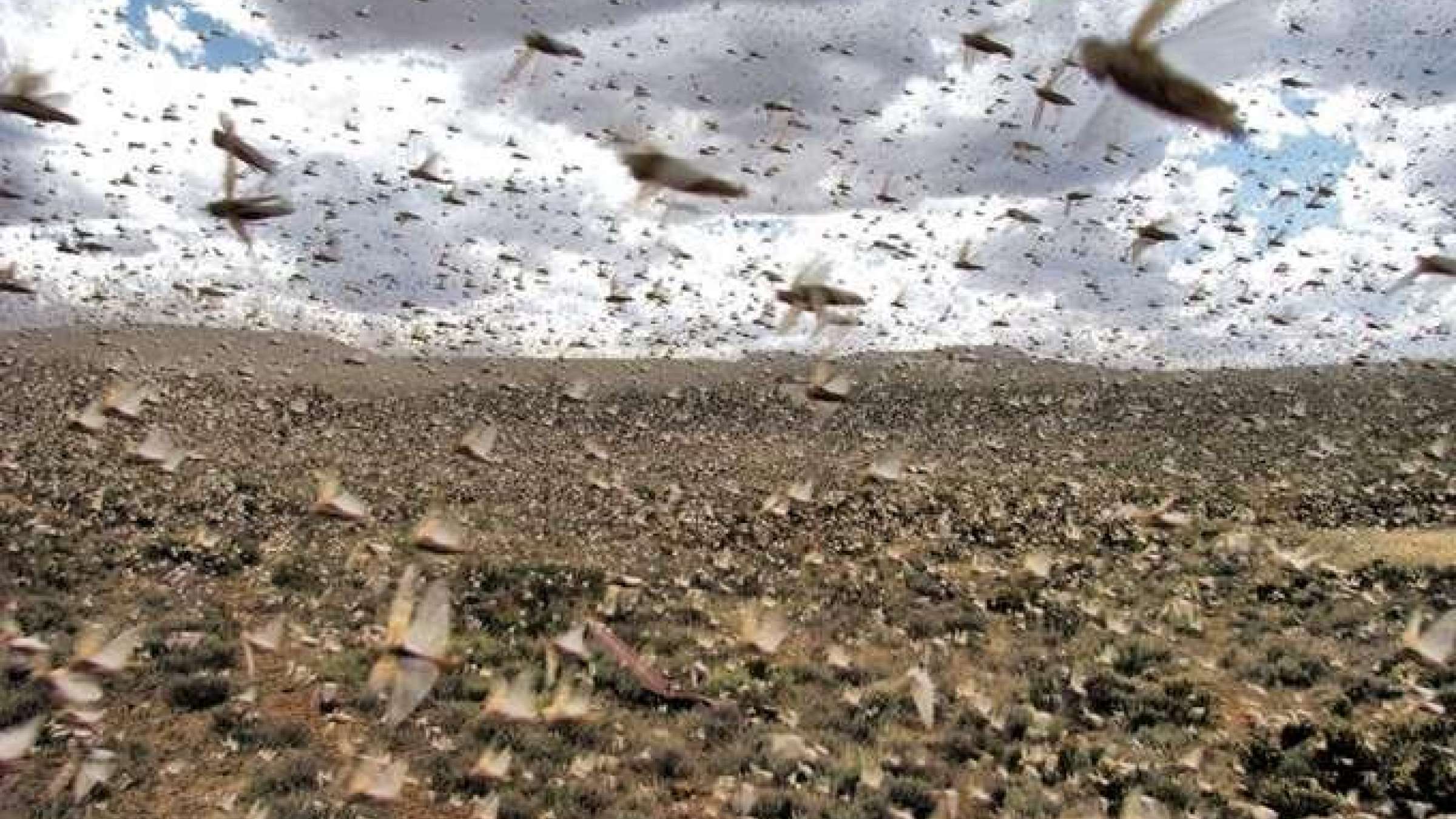 The desert locust is the world's most dangerous migratory pest with a voracious appetite unmatched in the insect world. Within the desert locust's range, which is equivalent to 20% of the earth's land surface, the insects annually reproduce, concentrate and then form swarms that can move up to 150 kilometres per day in search of food. These swarms are able to migrate across long distances, and can even jump from continent to continent.  A single desert locust swarm the size of Brussels could consume Belgium's entire food supply in a single day.

While desert locust swarms aren't found in the Americas or in Europe, these insects pose a constant threat to food supplies in some of the world's poorest and driest countries, occupying a huge area that stretches from West Africa to the Indian subcontinent. To control these swarms, vulnerable countries use remote sensing technology and ground surveys to identify and eliminate locust breeding areas. Now, some experts think drone technology could provide survey and control teams with an inexpensive and efficient method of searching for these destructive insects.

A global early warning and preventive control system against desert locust has been in place for more than half a century, representing the world's oldest migratory pest warning system. Some two dozen frontline countries have created dedicated national locust centres within their government, consisting of well-trained specialized survey and control teams equipped to scour the desert every day in 4WD vehicles to find and treat infestations.

To find insect infestations, these teams rely on their own knowledge as well as on information from nomads. This knowledge is combined with up-to-date satellite imagery indicating rainfall and green vegetation, allowing the teams to identify potential breeding sites and growing locust infestations. The teams record their observations on a rugged handheld tablet, which transmits the data in real time via satellite to their national locust centre. This information is then passed on to the Desert Locust Information Service (DLIS), based at the headquarters of the Food and Agriculture Organisation (FAO) of the United Nations in Rome, Italy.

The successful prevention of desert locust plagues relies on regular monitoring in the desert, early warning, and timely response. If a local plague is not detected on time it has devastating effects on local livelihoods. For example, it took more than $500 million and two years to control the 2003 and 2005 locust crises in northern Africa. Some 13 million hectares were treated with pesticides. Cereal losses reaching 100% were reported in some areas, and in Mauritania alone, 60% of household heads became indebted. Education levels dropped in Mali, as children were withdrawn from school due to economic pressure.

While the early warning and preventive control system to manage locust plagues is well-established and functions on a daily basis to protect valuable food supplies and livelihoods, it is not perfect. Currently, there are three primary limitations that impact this system: the huge and remote desert areas that must be searched for locust infestations; increasing political insecurity, inaccessibility and dangers within these areas; and the safe use of pesticides during control operations.

The operational use of unmanned aerial vehicles (UAVs) – also known as drones – could potentially overcome these limitations in many affected nations. In the field, UAVs could be used to automatically collect high-resolution imagery of green, vegetated areas potentially affected by locusts. Controlled by a rugged, hand-held tablet, the UAV would follow a pre-programmed flight path, covering a 100 kilometre survey radius.

After the UAV finishes its flight, survey teams would be able to use the data to identify areas that seem most likely to harbour locusts, allowing them to travel directly to suspicious locations. Once the team reaches such an area, the UAV could be launched to hover overhead and identify other, nearby locust infestations that may require treatment. A separate control UAV could then be used to administer pesticides directly onto the locust concentrations. UAVs could also be used to check for locusts in areas that are insecure or cannot be accessed by ground teams.

The above scenario offers a number of advantages, as compared to the survey and control methods currently used in locust-affected countries. Ground surveys would become more efficient, since teams would no longer have to roam the desert in a random manner, hoping to come across suspicious-looking green areas or locust infestations. Instead, UAVs would be able to pinpoint these areas, allowing teams to directly travel to them.

Once in the potentially infested area, the UAV would provide a precise confirmation of the extent and scale of the infestation at that site, which could be several hectares or square kilometres in size. Control operations would become safer and more effective, as human operators would no longer be exposed to potentially dangerous pesticides while eliminating the insects. Pest control operations would also become more effective, since drones would be able to spray infestations precisely, using the correct pesticide dose and methodology.

While incorporating UAVs into the existing desert locust early warning and prevention system seems to offer advantages, but several challenges remain. First, an UAV needs to be designed with sufficient endurance to cover at least 100 kilometres in one flight, while carrying optical sensors that can accurately differentiate green annual vegetation from bare ground. The drone system should then be able to process and output these results while in the field. Due to battery and spare parts limitations in developing countries, the UAV should be solar powered, and consist of robust yet simple parts that are easily available in local markets.

The UAV should also be able to accurately detect patches or concentrations of locusts within a single site on a reliable basis. A control UAV will need to be able to balance a potentially bulky pesticide payload with a long flight time, in order to treat the largest number of locust infestations within the greatest amount of area.

Operating both survey and pest control UAVs will have to be simple and intuitive, as users in the field may have only limited expertise and computer skills. Lastly, national governments will need to create legal frameworks that permit the use of drones for locust control operations.

The FAO is currently working with university researchers and private sector partners in Europe to address challenges concerning design, endurance, power, detection of green vegetation and locusts, and in situ data processing in order to incorporate drone technology into national survey and control operations. Initial field trials are expected to commence later this year in Mauritania to test some potential new technology, and to refine and adopt it for eventual operational use in locust-affected countries.

The FAO remains hopeful that within five years, UAVs will play an integral role in protecting food supplies and livelihoods from the desert locust, as part of the fight against global hunger and poverty. It is hoped that this technology and the lessons learned from the desert locust experience can be further modified and adopted for use in combatting other agricultural pests and diseases throughout the world.