The Framework aims to achieve the substantial reduction of disaster risk and losses in lives, livelihoods and health and in the economic, physical, social, cultural and environmental assets of persons, businesses, communities and countries over the next 15 years. 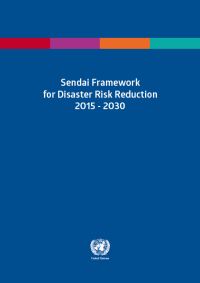 Midterm Review of the Sendai Framework

Called for by the UN General Assembly the MTR SF marks the midpoint in the implementation of the Sendai Framework, the 2030 Agenda, the Paris Agreement and the Addis Ababa Action Agenda. It is also an important milestone for other UN frameworks.

Monitoring implementation of the Sendai Framework

More on monitoring the Sendai Framework

The platform allows stakeholders to inform the public about their work on DRR while identifying crossovers with others in the field and potential partners with whom to collaborate to maximise impact. Stakeholders can get their achievements highlighted too. All stakeholders (private sector, civil society organizations, academia, media, local governments, etc.) working on DRR can submit and follow-up their commitments.

In January 2005, 168 Governments adopted a 10-year plan to make the world safer from natural hazards at the World Conference on Disaster Reduction, held in Kobe, Hyogo, Japan.

The Hyogo Framework is a global blueprint for disaster risk reduction efforts during the next decade. Its goal is to substantially reduce disaster losses by 2015 - in lives, and in the social, economic, and environmental assets of communities and countries.