Climate change, migration and the risk of conflict in growing urban centers 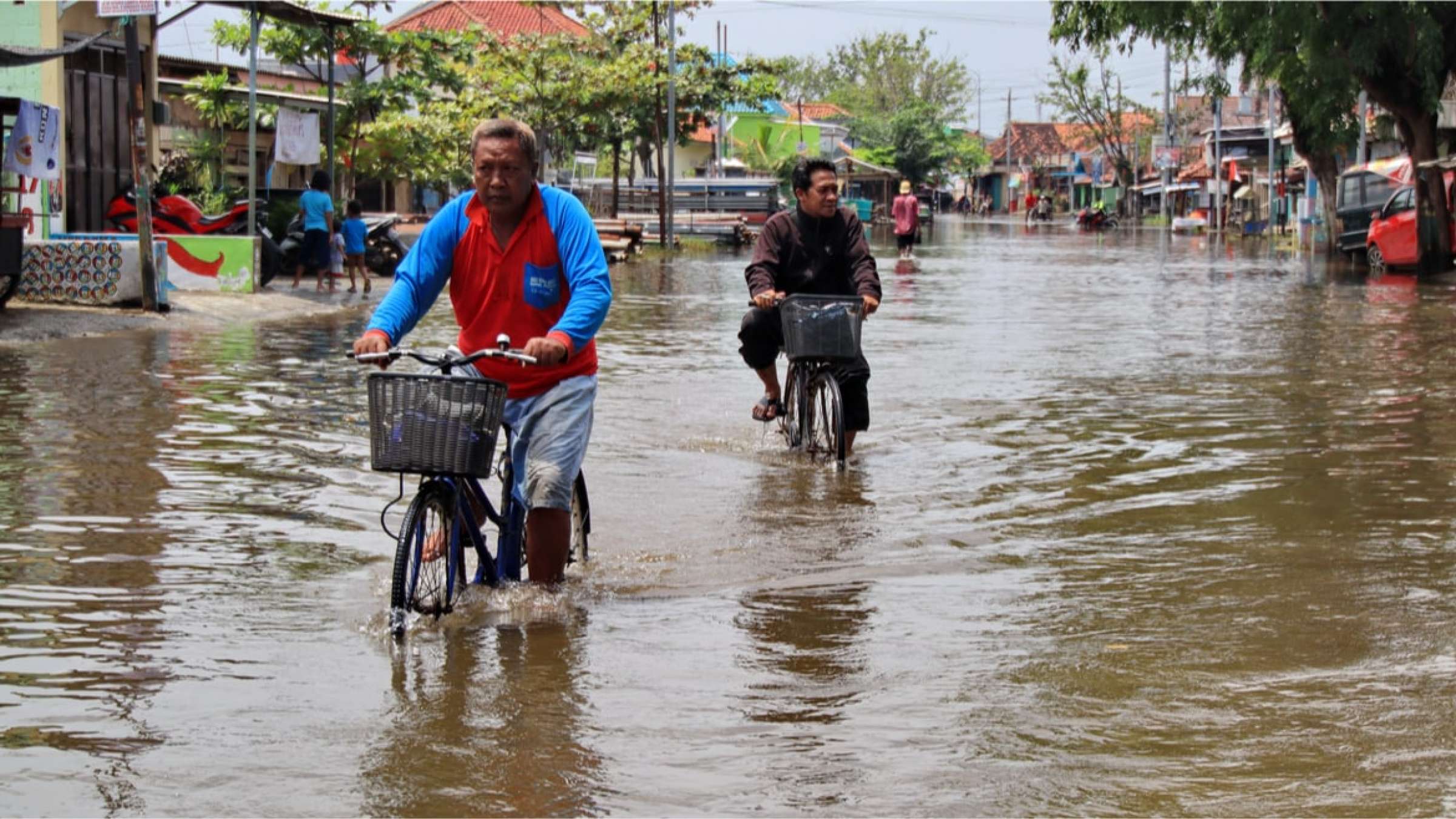 How can leaders address the interconnected risks that climate change, rapid urban growth and fragility pose to human security in cities?

From 2015 to 2050, the world’s urban population is expected to nearly double, in part because migrants from rural areas devastated by climate change are being driven to cities in search of economic and social stability. However, many of the world’s fastest-growing cities are already struggling to handle their own climate issues. From rising seas to freshwater scarcity, the complex interplay of climate change, population growth and fragility in cities has made them hotbeds for social and economic inequalities — increasing the risk of violence and having a profound impact on human security in urban centers around the world.

Amman, Jordan, is a case in point: changing precipitation patterns, water mismanagement and a rapidly expanding urban population are stressing already-scarce water resources in the city, prompting officials to limit water deliveries to households. Meanwhile, Jordan hosts more than one million Syrian refugees, the majority of which reside in cities, putting even more pressure on valuable water resources and straining economic infrastructure. Tensions between refugees and host communities have risen, and Jordanians have called for limits on competition from refugees. Efforts to ease the water crisis pushed Jordanian officials to engage Israel in a water-for-solar trade. The resulting agreement drew hundreds of protesters who warned the relationship would make Jordan dependent on Israel for its future water supply.

Amman is one of many cities facing such stressors, and the risk of conflict in urban areas is likely to only rise without concerted and proactive action.

Cities at the Center of Geopolitical Tensions

Rapidly growing cities in fragile contexts are experiencing increasing socio-political tensions due to widening economic inequality, strained urban service delivery, and heightened political mobilization, especially among marginalized populations. That trend is likely to be sped up by displacement toward urban areas stemming from climate change — something that is now a norm in regions like South Asia.

And once migrants arrive, inequality between subsets of urban communities — rather than economic opportunities — is driving their experience of urban areas. New arrivals are often isolated and perceived as “non-citizens” or interlopers competing for urban resources like water supply, energy, education or public transportation. Unequal access to services has been shown to result in anger around government unresponsiveness and to drive protests and greater distrust in governance.

For example, 300,000-400,000 migrants resettle in Dhaka, Bangladesh every year — often due to the connection between climate change and poverty — making it one of the world’s fastest-growing cities. Once there, migrants tend to live in overpopulated slums on the urban periphery, where access to resources like water are rare and pollution is high, as well as rates of violence. In addition, these areas tend to be more vulnerable to climate emergencies — such as low-lying areas prone to floods, or hilly areas prone to landslides — and migrants have fewer available assets to recover from such emergencies.  The combination of weather-related disasters, marginalized populations and other exacerbating social conditions, are more likely to result in violent conflict.  And while city officials struggle to address the rapidly expanding scale of local needs, extremist and violent organizations can recruit more easily among desperate populations by filling in the gaps left by official institutions and the services they provision.

In such situations, many migrants also end up in climate-vulnerable locations, where the likelihood of floods or other disasters is high. When disasters happen, the impact is not limited to injury, death and property loss. The psychological impacts exceed physical injuries by about 40-1. And in the aftermath of disasters, women and minorities are particularly vulnerable to gender-based violence and trafficking.  Migrants may also be driven to move yet again in the search for more secure locations, a trend known as secondary migration.

Additionally, mobility often requires access to the resources that enable a move to urban areas in the first place, so the poorest of the poor are often left behind. Little attention has been paid to how mobility likely affects social cohesion and social capital in both rural and urban areas. And how this may be linked to urban fragility, the risk of violence and economic opportunities is unclear.

The Human Side of Cities

At the Stockholm Forum on Peace and Development this past May, USIP, together with the Peace in our Cities network and the European Union Institute for Security Studies, convened a session on “Urban Fragility and Violence Within a Changing Climate” to explore how urban peace is threatened by a mix of weak governance, climate change and rapid urbanization and discuss how cities can respond more effectively to challenges while also reaping opportunities from urban growth.

One of the key proposals coming out of the session was a change in perspective: One that sees cities first as communities of diverse individuals, rather than as a built environment. Approaches to urban fragility have focused primarily on formal systems of urban governance — where responses to violence are often securitized and fail to recognize how elevated violence is often linked to social inequalities and disconnectedness.

Instead, a human-centric approach could expand urban approaches to peace to include a greater array of both formal and informal groups and actors. This would also allow policymakers to consider social and economic linkages between urban and rural areas and center policy that factors in connectedness, proximity and trust.

An example of the importance in recognizing informal as well as formal organizations comes from two neighborhoods in the El Salvador capital, San Salvador. There, faith-based organizations managed to work directly with local gangs by maintaining their independence from both gangs and law-enforcement agencies and demonstrating their willingness to maintain confidentiality around gang information. This show of respect to gang members as individuals allowed the faith-based organizations to both stay free of gang influence and to gain access to key populations.

Meanwhile, Ecuador’s experience with urban violence is also instructive: the country legalized gangs in 2007. This social recognition, combined with programs to provide economic opportunities, helped to significantly reduce violence. Recognizing that gangs and other violent groups are made up of individuals who are playing active roles in shaping the urban landscape provides a clear justification for exploring how to involve them in discussions of a city’s future direction.

In Medellin, Colombia, historical abuse on the part of government officials led to widespread mistrust and restricted access to justice. To address this, a partnership was formed between city officials, local justice actors and NGOs, who launched “Justice Houses” to provide historically-marginalized populations with access to integrated centers that address pressing community justice needs. The success of the Justice Houses would not have been possible without a concerted focus on trust-building. City officials also employed holistic approaches to address violence, bringing “institutions closer to citizens,” including libraries, education centers and transportation. Between 1991 and 2006 Medellin achieved an 80 percent drop in violence, thanks in part to these approaches.

The importance of building trust can be seen in the Belgian city of Mechelen’s response to increasing xenophobia sweeping across Europe  With the “The People Make the City” campaign, the city prides itself on being a leader on integration of migrants in Europe, placing a huge emphasis on offering refugees safety, shelter, and support. City leadership’s focus on preventing “othering” against migrants and refugees within the city has led to a decrease in violence and extremism, and has led other cities to develop similar initiatives.

The Impact of City-to-City Networks

Faced with the exacerbating effects of climate-driven migration, cities will more likely discover strategies for resilience through stronger connections with other cities in a wider global community. Global networks of cities like C40, Peace in Our Cities, the Resilient Cities Network, and the Strong Cities Network allow cities to move beyond their own borders — creating the space for peer exchange and knowledge-sharing around critical shared issues. Exchanges born through peer networks expand the scope of what is considered possible, increasing the potential for innovation and inspiration, while remaining grounded and practical.

And where international linkages can provide frameworks for exchange, national networks are equally important. National-level officials must entrust resources to local leaders to tackle local challenges stemming from climate change and urban conflict.

Many city leaders work every day with urban residents and are primed to be a central figure for innovative partnerships aimed at harnessing positive narratives on human mobility to advocate for a human-centric approach to the integration of migrants and violence prevention.

There are already existing networks that do essential work on peace, climate change, migration and urban issues. These networks deserve significantly greater investment as we continue to deepen our understanding of how these issues are inter-connected, and supporting dialogue between these networks is increasingly urgent.

Cities are dynamic, with ever-evolving constellations of people. They face complex interlinkages between external drivers such as climate change and the myriad interactions of communities both within the urban center and outside. Seeing cities as the embodiment of the complexity of human interactions, frailties and capacities could help clarify pathways to building a new type of connectedness and community that help reduce fragility and violence and enable cities to live up to their greatest potential.