Climate change impacts on seaports: a growing threat to sustainable trade and development

Seaports are essential for global trade-led development, and for the ‘Blue Economy’. They provide access to global markets and supply-chains for all countries, and are integral to maritime transport, as well as fisheries, offshore energy development, and many economic activities in coastal zones. With over 80 % of world trade volume carried by sea - from port to port -, they are crucial infrastructure nodes that  underpin global supply chains and are key to future trade and development prospects, particularly of developing States which currently account for around  60 % of goods loaded and unloaded globally. At the same time, ports are particularly exposed to various natural hazards, due to their locations along open coasts or in low-lying estuaries and deltas; their setting makes them susceptible to impacts of climatic hazards such as rising sea levels, storm surges, waves and winds,  riverine and pluvial flooding, as well as  tectonic events (e.g. tsunamis).

Given the critical role of ports in the global trading system and their potential exposure to climate related damage, disruptions and delays, enhancing their climate resilience is a matter of strategic socio-economic importance for the global economy and society as a whole (UNCTAD, 2020a). It is also key to enabling small island developing States (SIDS) and other vulnerable coastal and island nations to explore and harness the full potential and benefits of the blue economy for sustainable development. SIDS and other island nations depend on their seaports as lifelines for external trade, food and energy security, tourism – often a major driver of economic growth and development, as well as in the context of Disaster Risk Reduction. Ports also provide vital socio-economic linkages and are key to regional and inter-island connectivity. However, in many SIDS these critical assets are at high and growing risk of climate change impacts such as coastal flooding, from as early as in the 2030s.

Although many climatic hazards can affect seaports (e.g. heat waves, extreme winds and precipitation), mean sea-level rise (SLR) and associated extreme sea-levels (ESLs) pose a particularly important threat, which is growing. A brief overview of the increasing hazards and impacts of sea level rise on ports under climate change illustrates the urgent case for action.

Ports and connecting coastal transport infrastructure form complex systems that can be heavily impacted by rising mean sea levels as well as potential increases in the frequency/intensity of extreme sea levels (ESLs) due to storm surges and extreme waves, that can cause permanent or temporary inundation, respectively. In the case of ports integrated within large coastal urban agglomerations, there can be also impacts for large populations and a broad range of stakeholders and socio-economic activities. Coastal land subsidence due to extensive urban development may result in additional (relative) sea level rise and increased flood risk for many large port cities, requiring improved adaptation pathways.

Economic losses arising from both direct damages to infrastructure and operational disruptions/delays across interconnected global supply chains can be extensive, particularly in regions affected by tropical cyclones and related storm surges and waves. For example, the total losses from weather-related disasters in 2017, including the devastating Caribbean hurricane season, have been estimated at US$ 320 billion, with damages and losses in many affected SIDS amounting to a significant share (or multiple) of GDP, whereas the cost of the 2019 Hurricane Dorian for the Bahamas alone were estimated at US$ 3.4 billion, with a large fraction of these damages/losses associated with transport infrastructure. Hurricane Sandy (2012) caused over US$ 62 billion losses in New York, New Jersey and Connecticut, including extensive damage and a week-long shut-down of the US New York/New Jersey container port. A recent study estimates that the total value of assets exposed to episodic coastal flooding by 2100 could increase to 12 – 20 % of the global GDP, if no adaptation measures are taken.

Sea-level rise is largely driven by global warming. Global warming of more than 1.0°C above pre-industrial levels has already been observed and is predicted to reach 1.5°C as early as in the 2030s, with significant impacts for coastal developing States (IPCC, 2018). A 2°C of global temperature increase - widely regarded as the threshold beyond which climate change risks may become unacceptably high - may be reached by the 2050s, depending on the future GHG emissions. Despite a brief emission dip caused by the COVID-19 pandemic, and signs of acceleration of ambition in many countries, the latest UNEP Emissions Gap Report indicates that the world is still heading for a temperature rise in excess of 3°C this century – far beyond the Paris Agreement goals of limiting global warming to well below 2°C and pursuing a limit of 1.5°C.

Global warming can force large mean sea level changes, by the combination of: (i) ocean thermal expansion due to the increase of the ocean heat content; (ii) ocean water mass increases from the melting of the continental ice sheets, caps and glaciers; (iii) isostatic adjustment, anthropogenic coastal subsidence and changes in land water storage. Recent observations suggest a globally averaged mean sea level rise (SLR) of about  4.0 cm per decade (WMO, 2021). SLR projections are being continuously revised upwards, with recent projections suggesting that, by 2100, with 2°C of global warming above pre-industrial levels (specific Warming Level-SWL of 2°C), global SLR will be 30 - 93 cm higher than the mean of the 1986 - 2005 period (IPCC, 2018). Importantly, higher mean sea levels, combined with future extreme storm surges, waves and tides, could generate devastating extreme sea level (ESL) events, which pose a particular threat to seaports across the globe.

Extreme sea levels are set to increase almost everywhere (IPCC 2019 SROCC), and ESL events of a certain magnitude that presently have a low recurrence frequency (e.g. 1-in-100 years) are expected to become more frequent in most locations (Fig. 1). The baseline 1-in-100 years ESL (i.e. the mean of the 1986-2014 period, in m) varies considerably across regions, with major hot spots found along the macrotidal NW and NE American, western European, and East Asian coasts (Fig. 1a). Future ESLs are projected to increase for ports in all regions, with effects worsening under increasing global warming. Even in a 1.5 °C warmer world – i.e. as soon as in the 2030s, extreme sea levels of a magnitude so far expected to occur once a century, may occur as frequently as once every ten years in many South American, African, Gulf,  SE Asian and Pacific ports (Fig. 1b). In a 3 °C warmer world, many ports could experience the baseline 1-in-100 years ESL several times per year (Fig. 1d).

These projections have important implications for the adaptation of ports to climate change. Ports are assets with long lifespans, which means that changes in the recurrence (return period) of extreme sea level events (and associated waves) over the course of the 21st century affect the risk of flooding at facility level and the choice and design of requisite climate change adaptation measures. 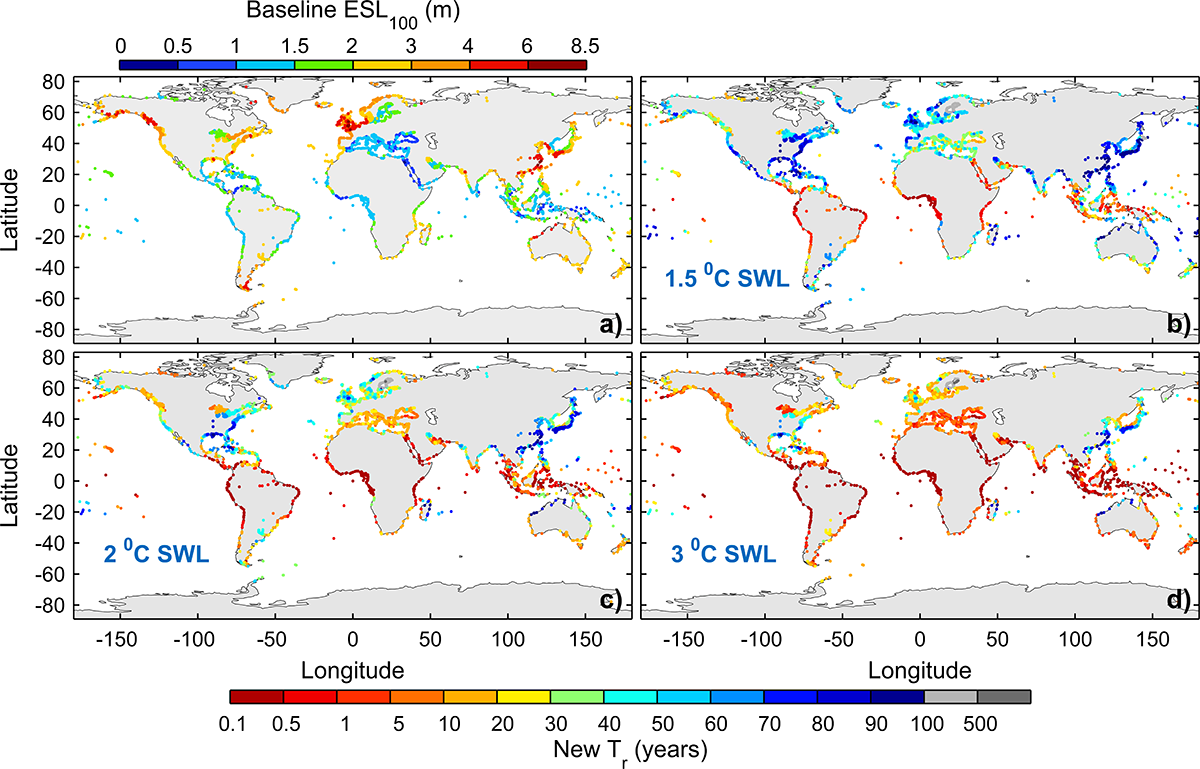 Although the above state-of-the-art modeling projections appear daunting, accelerating mean sea level rise in future decades could increase extreme sea levels even further. There are uncertainties concerning the evolution of future mean sea levels, stemming mainly from those associated with the ocean mass addition from continental ice melting. Recent studies suggest that polar and mountainous glaciers will lose between about 18 and 36 % of their ice mass (relative to 2015) over the course of the 21st century, depending on the climate scenario (IPCC, 2019 SROCC). At the same time, new research shows accelerated melting of the Greenland and Antarctic ice sheets (GIS and AIS, respectively). The GIS has been losing ice since the early 1990s (IPCC, 2019 SROCC; WMO, 2021) and is projected to continue its melting in the future; by 2100, the GIS mass loss may account for about 11 cm additional mean sea level rise. With regard to the AIS, it also appears that its melting has increased (IPCC, 2019 SROCC), with a very recent study suggesting that its future melting might be worse than previously expected; under scenarios in line with current emission pathways (i.e. allowing 3 °C SWL), an abrupt jump in the pace of Antarctic ice loss has been projected after around 2060, which would contribute about 0.5 cm/ýr to the global SLR by 2100. This could mean that from the 2060s, the overall annual rate of mean SLR could be more than double than that observed over the last decade. This would exacerbate future extreme sea levels and significantly increase the related risk of coastal flooding even further.

What needs to be done?

There is no single approach to climate change adaptation and resilience planning for ports, but an important message for policymakers, industry, international organizations and development partners is that there is no time to lose and “all hands on deck” are needed. An interconnected world depends on well-functioning transportation links. In the absence of timely planning and implementation of requisite adaptation measures, the projected impacts on seaports may have broad economic and trade-related repercussions and may severely compromise the sustainable development prospects of the most vulnerable groups of countries, such as SIDS. Given what is at stake and the potential costs of inaction, prevention and mitigation of climate change impacts on ports – and other key transport infrastructure, should become a major priority as part of sustainable development and climate strategies.

Enhancing the climate-resilience of seaports and other critical transport infrastructure will be central to advancing the 2030 Agenda for Sustainable Development (e.g. goals 9, 13, 14 and target 1.5) and to achieving progress on the objectives of other international agreements, including the Paris Agreement, the Sendai Framework for Disaster Risk Reduction,  the  SIDS  Accelerated  Modalities  of  Action  (SAMOA)  Pathway,  the  Istanbul  Programme  of  Action  for  the  Least  Developed Countries, and the New Urban Agenda.

Effective adaptation requires ‘fit-for-purpose’ risk assessment procedures (at local and facility levels), bridging of potential data and knowledge gaps, and the development of appropriate technical and management solutions that reduce vulnerability and allow for decision-making under uncertainty. It also requires finance, technology and capacity-building, as well as coordinated policy responses and supportive legal and regulatory approaches (UNCTAD 2020a; UNCTAD 2020b). Standards, guidance, and methodological tools also have an important role to play. Investment in energy efficiency, decarbonization and renewables may also provide major co-benefits, in terms of climate change mitigation and adaptation, as well as reduced dependency on energy imports and related expenditure.

Aiming for synergy and policy coherence in efforts at post-pandemic recovery and adopting more systemic, integrated approaches to climate change adaptation and resilience-building across sectors and networks could yield major benefits, especially for the most vulnerable communities. And investing in climate-resilience makes good economic sense: according to the World Bank, the overall net benefits of investing in resilient infrastructure in developing countries could amount to $4.2 trillion over the lifetime of new infrastructure – a  $4 benefit for each dollar invested in resilience.

While the need for action on climate-change adaptation and resilience-building for ports is increasingly being recognized, including as part of the Global Climate Action Pathways for Transport and Resilience, much remains to be done. And time is of the essence.