Climate change is hurting Africa’s water sector, but investing in water can pay off

The world is vastly underestimating the benefits of acting on climate change. Recent research from the Global Commission on the Economy and Climate finds that bold climate action could deliver at least $26 trillion in economic benefits through 2030. This ground-breaking research, produced by the Global Commission and more than 200 experts, highlights proof points of the global shift to a low-carbon economy, and identifies ways to accelerate action in five sectors: energy, cities, food and land use, water and industry. Our blog series, The $26 Trillion Opportunity, explores these economic opportunities in greater detail.

Zimbabwe's government recently declared a nationwide state of disaster, as drought combines with economic and political crises to push farmers and city water networks to the brink. According to WRI's Aqueduct tool, many African countries have extremely high water risk. This metric considers multiple factors, including vulnerability to droughts and floods, seasonal variability and competition for available water. Already, one in every three people across Africa face water scarcity. Nearly 400 million people in sub-Saharan Africa are denied even a basic drinking water supply.

While climate is an important factor driving water stress in Africa and around the world, poor management of water resources and services is the biggest challenge. As climate change makes rainfall more erratic and increases the risks of floods and droughts, investing in better water management and infrastructure is becoming even more important. These investments can strengthen economies. When targeted at the poorest people, they offer a triple dividend: alleviating poverty, supporting jobs and growth, and reducing vulnerability to climate change.

Investments in three key areas of the water sector will improve people's resilience to climate change across Africa:

Securing safe drinking water, sanitation and hygiene for all in sub-Saharan Africa would require $35 billion per year in capital costs, just 0.5% of the total spending required for global infrastructure.

Cheap, "low-regret" options can make water and sanitation services more resilient to climate change. Smart design and management can keep boreholes flowing during droughts, or stop latrines from overflowing during floods. In response to recurring drought, Ethiopia's government is using public finance to invest up front in water and sanitation services. It is also screening rural water supply projects for climate risk. Acting later is often more costly, as we see in Zimbabwe. In the capital city Harare, the city council has had to buy expensive water tankers to ferry water to residents.

Even in a changing climate, design may not be the biggest challenge facing engineers and policymakers in Africa. Often, a harder task is securing revenue to maintain infrastructure and adapt it to climate change once built. This requires taking policy action to back investment in gradual improvements and to make people to pay for water services, while shielding the most vulnerable from unaffordable costs through well-targeted subsidies. While only 15% of city residents in Kampala and Lagos have access to piped water, for these households, piped water is by far the safest and most affordable (up to 52 times cheaper) option. With secure revenue streams, private finance is also more likely to flow into the sector.

Poor communities often face greater exposure to climate hazards, such as more extreme rainfall or drought conditions, and have fewer resources to cope. By 2030, climate change could drive more than 100 million people globally into extreme poverty. In sub-Saharan Africa, 90% of the rural population depend on agriculture as their main source of income, and over 95% of arable farming relies on rainfall. Rising temperatures and unpredictable rainfall caused by climate change are expected to lower crop yields and raise prices. Governments must establish policies to reduce risks up front and manage those risks that are unavoidable. 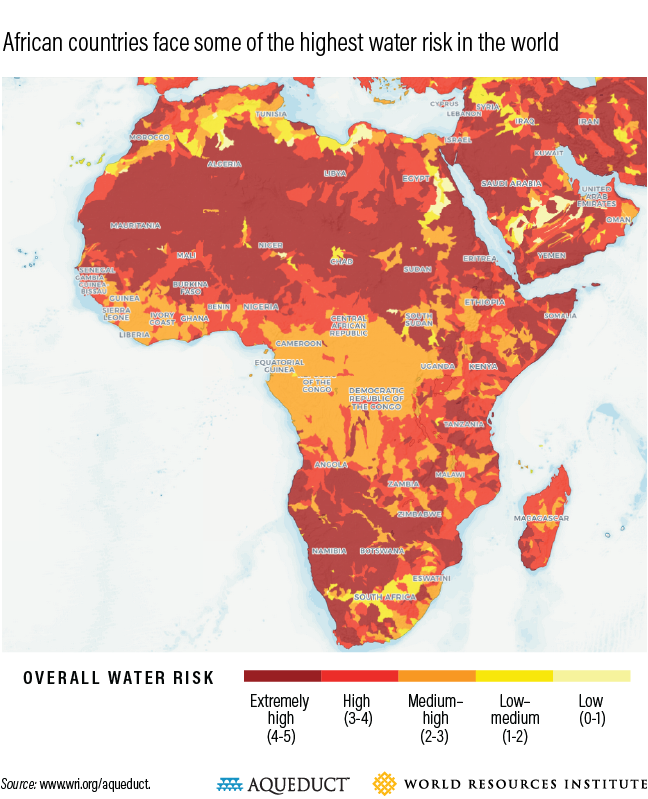 Mechanisms to pool risk between countries are increasingly important. African Risk Capacity (ARC) is a key example developed by African governments through the African Union. ARC establishes a sovereign insurance mechanism: countries pay a premium, and in a drought, payouts normally arrive faster than humanitarian aid. The system has paid out over $36 million to African countries affected by drought since 2014, helping stop millions of people from falling deeper into poverty. Without ARC, many families would have to sell everything they own to put food on the table.

However, insurance is only part of the solution. Governments need to build social safety nets and proactively reduce risks. The first task goes beyond water, but the second can be achieved in part by investing in climate-resilient water systems, such as water storage and irrigation.

3. Invest in Green as Well as Gray Infrastructure

Climate-proofing water systems isn't just about pouring concrete into taller flood defenses or bigger dams. Governments and businesses can invest in nature to fill part of the infrastructure gap. Green infrastructure plays a huge role in providing safe, clean and regular water flows — from wetlands that buffer coasts from storms, and aquifers that store water, to forests that reduce erosion and help keep water free of sediment.

In Kenya, the Tana River provides water for 95% of Nairobi's residents, and generates half of Kenya's hydropower. Excess sediment from eroding soil has been getting into the river, reducing reservoirs' capacity and increasing water treatment costs. The Upper Tana-Nairobi Water Fund, a public-private partnership involving the Kenyan government, private companies and The Nature Conservancy, invests upstream to help poor communities adopt farming and forestry practices that improve yields while reducing water use and soil erosion.

By integrating nature-based approaches into conventional infrastructure system planning, governments can ensure water supply and quality. They can save money and protect people, as well as the ecosystems upon which people rely.

Improving Africa's water management and infrastructure will reduce the climate vulnerability of people across the continent. Governments have a window of opportunity and a duty to their citizens to act now, and businesses and donors must back their efforts. Existing projects show that these investments pay off, with positive ripple effects across the economy.