China: Through flood and drought: reconstructing the Yellow River 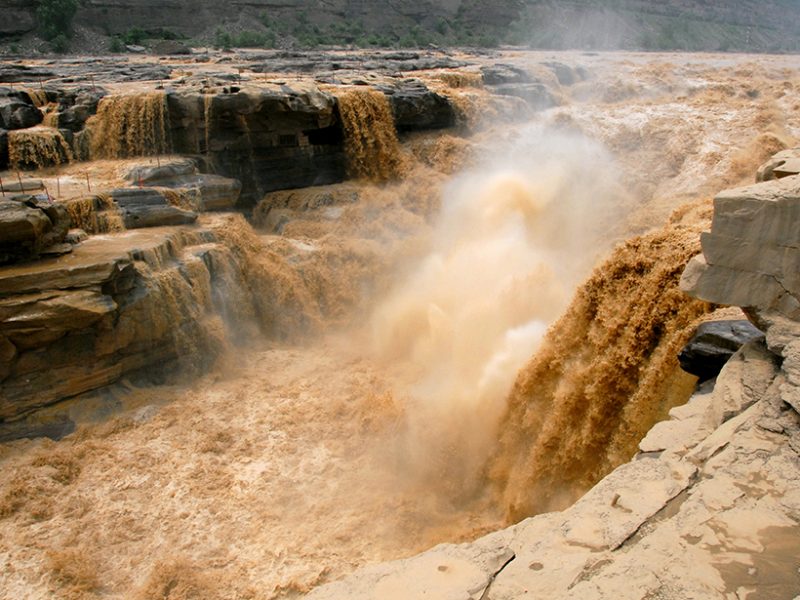 The Yellow River rushes over the Hukou Waterfall in China. New research examines how human activity has influenced the flow of the river. Credit: Leruswing, CC BY-SA 3.0

The Yellow River is the second-longest river in China and the sixth longest in the world. The river originates on the Tibetan Plateau and meanders for nearly 5,500 kilometers before it empties into the Bohai Sea. As it courses through China’s dry northern region, the Yellow River supplies water to more than 150 million people and supports 15% of the country’s croplands.

Humans have lived along the Yellow River for millennia; historical documents detailing the river’s history stretch back to 1470 CE. River gauge data date to only 1919, however, and most observations have occurred after 1950, a period that has seen substantial modification along the river. Despite the long historical record and accounts that indicate that the Yellow River frequently floods and shifts its course, China lacks detailed flow data for the Yellow River. As a result, there is little information about the natural trends and variability of the river’s flow.

Li et al. set out to fill this information gap. The authors combined moisture-sensitive tree ring chronologies from the Yellow River basin with records from the Shanxian and Lanzhou gauge stations to reconstruct 1,200 years of the river’s flow history. The study assessed the river’s long-term fluctuations, recent anomalies, and primary flow drivers and the future potential for change.

The results confirm that the flow of the Yellow River can vary wildly from year to year but generally follows trends that stretch from several decades to hundreds of years. Two flow cycles stood out in the tree ring records: One period spans 50–60 years and has been present since the 9th century; the other spans 130–220 years and has persisted since the 11th century. These cycles track temperature anomalies on the Tibetan Plateau and throughout the Northern Hemisphere. Typically, as temperatures warm, flow increases as more southerly monsoonal water supplies the river’s headwaters. With temperatures projected to rise in future years, the study implies that the river could experience higher flows in the coming decades.

The tree ring analysis suggests that the natural flow—without human intervention—of the Yellow River should have reached its highest level of the past 1,200 years over the past few decades. Instead, human modifications, including withdrawals for agricultural, industrial, and domestic purposes and increased evaporation from dam construction, have reduced the river’s flow by over 44% of what it would be under natural conditions. The reduction in flow has been so dramatic recently that the Yellow River often dries up in its lower reaches and fails to reach the sea, a phenomenon that would not have occurred before the 20th century.

The Yellow River is an important waterway for China, and the new study offers insights into the river that could help shape water policy and management in the years to come. (Geophysical Research Letters, https://doi.org/10.1029/2018GL081090, 2019)