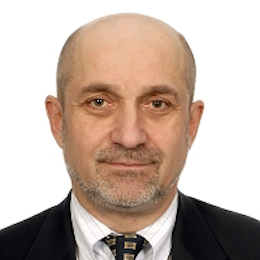 Team Leader of the GFDRR's Hydromet Program
Global Facility for Disaster Reduction and Recovery, the (GFDRR)

Vladimir Tsirkunov is the Team Leader of the Global Facility for Disaster Reduction and Recovery (GFDRR) Hydromet Program, which works as a service center providing analytical, advisory and implementation support for World Bank teams. Mr. Tsirkunov has over 30 years of scientific, applied technical and project management experience in environmental and natural resource management mostly in the Europe and Central Asia region. Prior to joining the World Bank in 1994, he was the Head of the Laboratory of the Supervision of the USSR (Russian) System of Hydrochemical Monitoring and Water Quality Data Collection. Since joining the Bank, he has worked on projects related to the preparation, appraisal and operational supervision of environmental investments, technical assistance and Global Environment Facility projects.

Partners in prediction: How international collaboration has changed the landscape of hydromet

Intense drought can devastate a country. Severe flooding can be catastrophic. Dealing with both at the same time? That’s just another day for many countries around the world that struggle to accurately predict weather- and climate-related disasters while simultaneously dealing with their effects.

Hydrological and meteorological (or “hydromet”) hazards – weather, water, and climate extremes – are responsible for 90 percent of total disaster losses worldwide. Getting accurate, timely predictions of these hazards into the hands of decision-makers and the public can save lives, while generating at least three dollars’ worth of socio-economic benefits for every one dollar invested in weather and climate services – a win-win. But less than 15 years ago, even the small amount of hydromet investment that existed was fragmented, with little hope of producing sustainable results.

In recent years, the landscape has changed dramatically. Today, some of the most vulnerable countries in the world have access to twice the funding than they did a decade ago.

One partnership has been a crucial contributor to this increased awareness of, and investment in, the hydromet sector: the collaboration between the World Bank, the Global Facility for Disaster Reduction and Recovery (GFDRR), and the World Meteorological Organization (WMO).

This week, at the 2017 Global Platform for Risk Reduction in Cancun, GFDRR, the WMO, and other partners have come together to convene the Multi-Hazard Early Warning Conference. The conference has brought together practitioners from across the globe to discuss how countries can improve the availability of, and access to, early warnings that can save lives.

A decade ago, hydromet investment was patchy at best, and there was limited collaboration in the field. In contrast, when the World Bank, GFDRR, and the WMO co-organized the First Development Partners Roundtable last year, they brought together 37 partners and donors that have been working on hydromet. (A second Roundtable is already in the works.) GFDRR’s Hydromet Initiative has partnered with leading national meteorological services across the globe. Project design has improved; funding has increased; and there is greater awareness than ever before of the benefits of hydromet modernization.

But the needs, too, are greater than ever. Hydromet modernization projects are crucial in Africa, which is particularly vulnerable to natural hazards: across the continent, almost half of all on-the-ground weather stations, and three-quarters of upper air stations, don’t report data.

The Africa Regional Hydromet Program, one of several programs on which the World Bank and the WMO collaborate, is working to fix that. The World Bank, the WMO/GFDRR and UNISDR are also collaborating on the Climate Risk and Early Warning System (CREWS) initiative, which aims to strengthen early-warning systems in the world’s Least Developed Countries and Small Island Developing States. This program is funded by France, Australia, Canada, Germany, Luxemburg and Netherlands.

The key to improving hydromet services in these vulnerable countries is to build the institutional and human capacity of governments and national weather agencies. That’s why the World Bank, GFDRR, and the WMO have worked to introduce an integrated approach to hydromet projects that fosters dialogue between national weather offices and the sectors they serve, and to share knowledge across borders. For instance, the three institutions and USAID collaborated on a guidance document to help hydromet service providers measure their economic impact. GFDRR and the World Bank support the annual InterMET Asia conference with WMO participation.

These resources can be a boon to the more than 100 countries worldwide that desperately need to overhaul their hydromet services. Hydromet hazards may be unavoidable, but for these countries, getting accurate information about them and disseminating it to those who need to know can save lives and rescue livelihoods. There’s plenty more work to do ahead, together.

This post was co-authored with Paul Egerton, the World Meteorological Organization Representative to the United Nations Headquarters since 2012. You can read a full version on the World Bank’s blog, here.