Resilience of informal settlements to climate change in the mountainous areas of Konso, Ethiopia and QwaQwa, South Africa 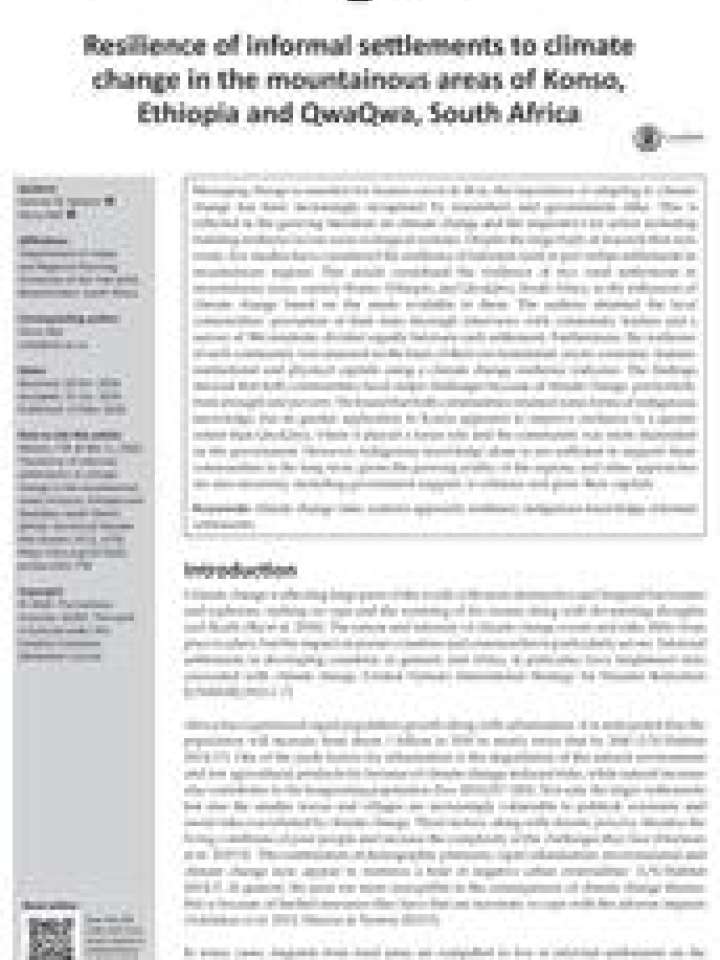 Managing change is essential for human survival; thus, the importance of adapting to climate change has been increasingly recognised by researchers and governments alike. This is reflected in the growing literature on climate change and the imperative for action including building resilience in this socio-ecological systems. Despite the large body of research that now exists, few studies have considered the resilience of informal rural or peri-urban settlements in mountainous regions. This article considered the resilience of two rural settlements in mountainous areas, namely Konso, Ethiopia, and QwaQwa, South Africa, to the influences of climate change based on the assets available to them. The authors obtained the local communities’ perception of their risks throsugh interviews with community leaders and a survey of 384 residents, divided equally between each settlement. Furthermore, the resilience of each community was assessed on the basis of their environmental, social, economic, human, institutional and physical capitals using a climate change resilience indicator. The findings showed that both communities faced major challenges because of climate change, particularly from drought and poverty. It was found that both communities retained some forms of indigenous knowledge, but its greater application in Konso appeared to improve resilience to a greater extent than QwaQwa, where it played a lesser role and the community was more dependent on the government. However, indigenous knowledge alone is not sufficient to support these communities in the long term, given the growing aridity of the regions, and other approaches are also necessary, including government support, to enhance and grow their capitals.