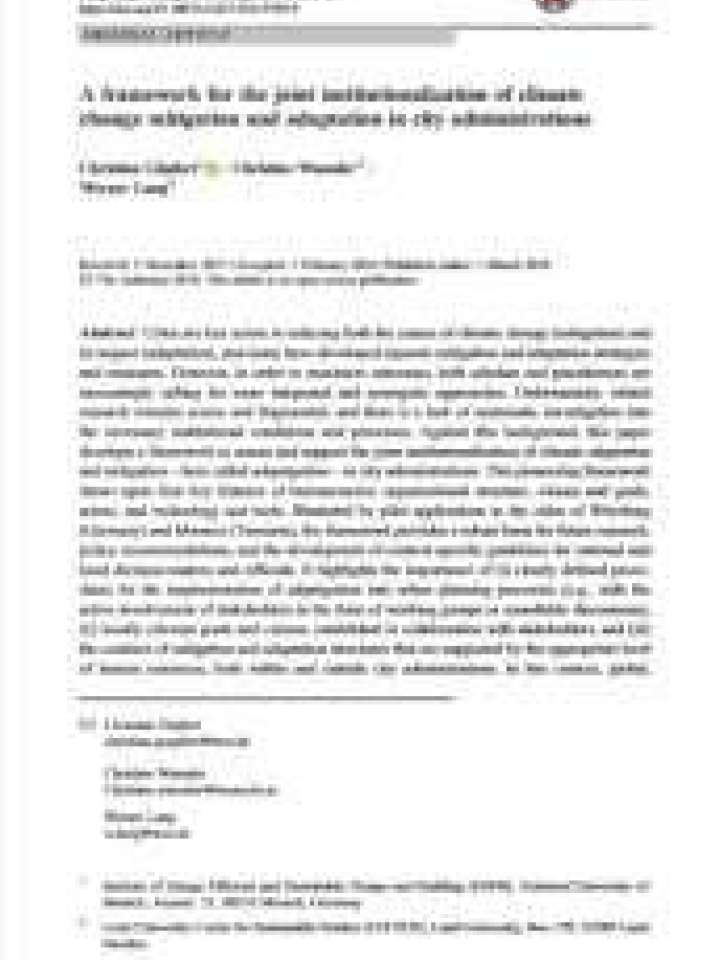 Cities are key actors in reducing both the causes of climate change (mitigation) and its impact (adaptation), and many have developed separate mitigation and adaptation strategies and measures. However, in order to maximize outcomes, both scholars and practitioners are increasingly calling for more integrated and synergetic approaches. Unfortunately, related research remains scarce and fragmented, and there is a lack of systematic investigation into the necessary institutional conditions and processes.

Against this background, this paper develops a framework to assess and support the joint institutionalization of climate adaptation and mitigation—here called adaptigation—in city administrations.

This pioneering framework draws upon four key features of bureaucracies: organizational structure, visions and goals, actors, and technology and tools. Illustrated by pilot applications to the cities of Würzburg (Germany) and Mwanza (Tanzania), the framework provides a robust basis for future research, policy recommendations, and the development of context-specific guidelines for national and local decision-makers and officials. It highlights the importance of (i) clearly defined procedures for the implementation of adaptigation into urban planning processes (e.g., with the active involvement of stakeholders in the form of working groups or roundtable discussions), (ii) locally relevant goals and visions, established in collaboration with stakeholders, and (iii) the creation of mitigation and adaptation structures that are supported by the appropriate level of human resources, both within and outside city administrations. In this context, global, supranational, and national institutions play an important role in supporting institutionalization by providing targeted funding and promoting adaptigation, which requires the development of integrated goals, visions, and legislation.