Stanford researchers have developed a gel-like fluid to prevent wildfires 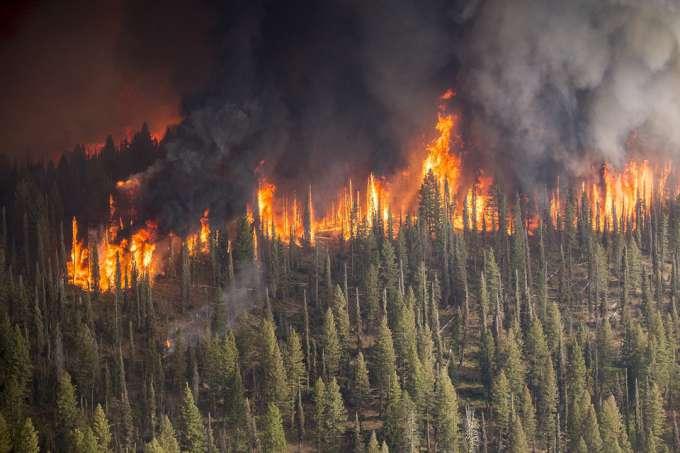 Scientists and engineers worked with state and local agencies to develop and test a long-lasting, environmentally benign fire-retarding material. If used on high-risk areas, the simple, affordable treatment could dramatically cut the number of fires that occur each year.

A preventive treatment developed by Stanford researchers could greatly reduce the incidence and severity of wildfires. The approach, outlined Sept. 30 in Proceedings of the National Academy of Sciences, involves an environmentally benign gel-like fluid that helps common wildland fire retardants last longer on vegetation.

A new technology developed by Stanford engineers promises a way to prevent a significant percentage of wildfires and drastically reduce the cost of fighting them.

Applied to ignition-prone areas, these materials retain their ability to prevent fires throughout the peak fire season, even after weathering that would sweep away conventional fire retardants. By stopping fires from starting, such treatments can be more effective and less expensive than current firefighting methods.

“This has the potential to make wildland firefighting much more proactive, rather than reactive,” said Eric Appel, the study’s senior author and an assistant professor of materials science and engineering in the Stanford School of Engineering. “What we do now is monitor wildfire-prone areas and wait with bated breath for fires to start, then rush to put them out.”

A century of fire suppression plus hotter, drier weather has intensified the destructive power of wildfires and lengthened the season of threat. While the 2019 season has been relatively calm in the West so far, the past two years have brought four of the 20 largest and eight of the 20 most destructive wildfires in California’s history. Across the country, federal firefighting costs in 2018 came to more than $3 billion – the highest total ever.

Wildfires are a critical part of some ecosystems, but the vast majority in the U.S. are human-caused. Many of them originate in the same hotspots, such as roadsides, campgrounds and remote electrical lines, time after time. Treating these areas prophylactically could provide a highly targeted approach to wildfire prevention, but, until now, long-lasting and environmentally benign materials have not been available.

Aside from clearing and burning potential fuels, wildfire management generally revolves around fire suppressants and retardants, with many suppressants used as short-term retardants. To fight active fires, crews use suppressants, such as gels that carry water and superabsorbent polymers found in diapers. These gels are frequently used as short-term retardants on buildings in the path of encroaching fires, but they lose effectiveness once the water entrapped in them evaporates – something that often occurs in less than an hour during normal wildland fire conditions.

The most widely deployed commercial wildland fire retardant formulations use ammonium phosphate or its derivatives as the active fire-retarding component. However, these formulations only hold retardants on vegetation for short periods of time, so they can’t be used preventively. By contrast, the Stanford-developed technology – a cellulose-based gel-like fluid – stays on target vegetation through wind, rain and other environmental exposure.

“You can put 20,000 gallons of this on an area for prevention, or 1 million gallons of the traditional formulation after a fire starts,” said study lead author Anthony Yu, a PhD student in materials science and engineering at Stanford.

The researchers have worked with the California Department of Forestry and Fire Protection (CalFire) to test the retardant materials on grass and chamise – two vegetation types where fire frequently starts. They found the treatment provides complete fire protection even after half an inch of rainfall. Under the same conditions, a typical commercial retardant formulation provides little or no fire protection. The researchers are now working with the California Department of Transportation and CalFire to test the material on high-risk roadside areas that are the origin of dozens of wildfires every year.

“We don’t have a tool that’s comparable to this,” said Alan Peters, a CalFire division chief in San Luis Obispo who monitored some of the test burns. “It has the potential to definitely reduce the number of fires.”

The Stanford-developed treatment contains only nontoxic starting materials widely used in food, drug, cosmetic and agricultural products. The unique properties of these gel-like retardant fluids allow them to be applied using standard agricultural spraying equipment or from aircraft. While it washes away slowly, providing the ability to protect treated areas against fire for months, the materials eventually degrade.

“We hope these new materials can open the door to identifying and treating high-risk areas to protect people’s lives and livelihoods,” said Appel.

The bitter lesson of the Californian fires

USA: New wildfire models to predict how wildfires will burn in next 20 minutes

USA: Early warning for wildland fires? There could be an app for that