More than half of the world’s people live in cities, and it is expected that by 2050, 68% of the world’s population will live in urban areas. As people and assets concentrate in cities, these become increasingly vulnerable to the impact of climate change, disasters and conflicts. Migration is a major factor of urbanisation, with one-third of the world’s 66 million displaced people living in cities. If planned and managed well, cities will become the main tool for sustainable development, the setting of its greatest challenges and opportunities. In order to share successful and replicable experiences, UNESCO organized an event focusing on “Building Urban Resilience” during the 9th World Urban Forum in Kuala Lumpur, Malaysia.

The discussion was articulated around concrete examples of initiatives and management practices that strengthened cities’ capacity to provide basic services, particularly managing water to ensure access to freshwater, sanitation and drainage, and the resilience of their built environment from natural hazards. By bringing together mayors, academics, researchers, city-level practitioners, international experts and representatives of civil society, the aim was to examine the feasibility of replicating and scaling up these good practices and to disseminate them widely.

The linkages between the New Urban Agenda (NUA), the Paris Agreement on climate, the Sendai Framework on disaster risk reduction and 2030 Agenda for Sustainable Development were highlighted by Dr Nicola Tollin, UNESCO Chair of Sustainability at the Technical University of Catalonia, President of RECNET and Executive Director of the International Programme on Urban Resilience, RESURBE. He demonstrated the need to bridge local and international climate action at the urban level, and presented participatory projects that use nature-based solutions for water management and generate environmental, economic, social and climate co-benefits.

The challenges of water management and provision in megacities were explained by Mr Arjun Thapan and Ms Mai Flor of WATERLINKS. Megacities contribute more than 20% of the GDP in developing Asian countries. They are major users of water, and sustaining safe, affordable and sustainable services to their communities, while ensuring that all sectors, such as the industrial and agricultural sectors, maintain their share to continue operations is particularly challenging. Ms Flor shared concrete examples of integrating climate change impacts in the operations of water utilities in megacities, including the capacity development of their human resources. Utilities constitute the pillar upon which all water uses rely on for their stability and continuity. 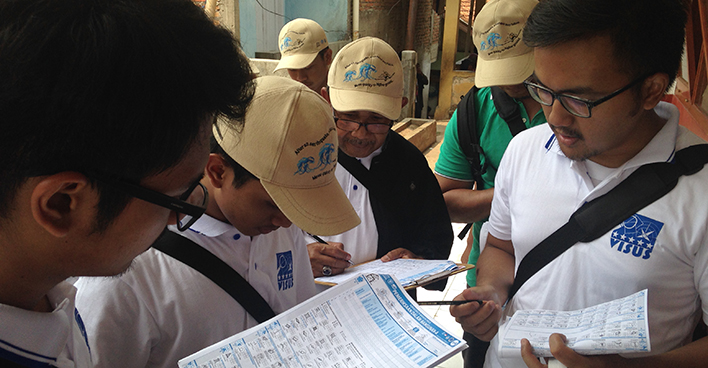 Students and engineers learn to assess the safety of schools using the VISUS Methodology, Pilot Project in Indonesia

A science-based assessment methodology for school safety was presented by Mr Ardito Kodijat, Natural Science Programme Officer of the UNESCO Regional Bureau of Science in Jakarta, Indonesia. The Visual Inspection for Defining Upgrading Strategy (VISUS) methodology was successfully implemented through pilot projects in six countries, and was used to help Antigua and Barbuda plan for recovery following hurricane Irma in 2017. VISUS results provide easy to understand, graphic based results, that provide local authorities with an overview of the safety of schools accompanied by a cost element, in order to facilitate informed decision-making. The VISUS methodology aims to help governments identify priorities and define the budgets needed to ensure the safety of their school infrastructure. It identifies needs for rehabilitation, reinforcement or retrofitting of buildings, or for the constructions of new safe infrastructure. Strengthening school safety contributes to the implementation of the New Urban Agenda, the Sendai Framework and the 2030 Agenda.

Through their discussion, participants stressed the need for a stronger system of multilevel governance in order to move urban resilience forward. This entails the horizontal integration of thematic international policies (Paris Agreement, New Urban Agenda, Sendai Framework and Sustainable Development goals) at national level, and finally through vertical integration in order to full unlock the potential of urban resilience as a systemic and integrative concept able to generate co-benefit (e.g. sustainability and development and/or mitigation and adaptation). Tools and replicable best practices exist to serve sustainability but scaling up is often confronted with limited finances.

The event was organized by UNESCO’s Water Family, led by its Intergovernmental Hydrological Programme (IHP), the UNESCO Chair on Sustainability and WATERLINKS as well as the Disaster Risk Reduction Unit with the support of the UNESCO Office in Jakarta.

Dealing with deluge: Urban water management in a changing climate