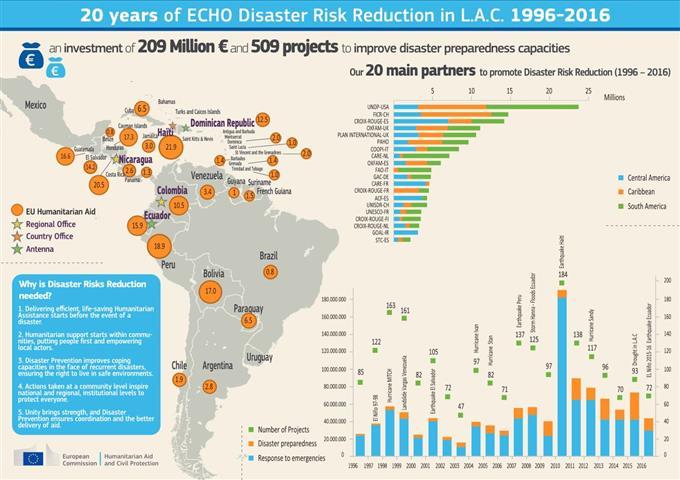 Located over the Pacific’s Nazca tectonic plate, the North American plate and the Caribbean plate which are constantly shifting, the region suffers frequent, powerful earthquakes that devastate the region; in April 2015, Ecuador was shaken by a magnitude 7.8 seism. Bordering the Pacific’s “Ring of Fire”, so called because the area contains a concentration of more than 75% of the world’s active volcanoes, the region has 13 active volcanoes spread across Mexico, Guatemala, Nicaragua, Colombia, Ecuador and Chile. Finally, the Caribbean is the heart of the “hurricane belt” where high humidity, light winds, and warm sea surface temperatures coalesce to form violent storms, the most recent of which was the Category 5 hurricane Matthew.

This is why, 20 years ago, the European Commission’s Directorate-General for European Civil Protection and Humanitarian Aid Operations launched a comprehensive agenda for Disaster Risk Reduction (DRR) throughout the region. It has since dedicated in excess of €209 million to over 500 DRR projects in Latin America and the Caribbean alone, saving countless lives.

“The EU's famous Disaster Preparedness Programme, DIPECHO, was formally launched in 1996, but we started supporting small disaster prevention projects as early as 1995, inspired by the guidelines for natural disaster prevention, preparedness and mitigation defined during the May 1994 World Conference in Yokohama,” explain Jocelyn Lance, the EU's Emergency Rapid Response Coordinator for Latin America and the Caribbean.

Disaster Risk Reduction (DRR) initiatives are based on the premise that prevention ahead of a disaster saves lives, and are vastly more cost efficient compared to post-disaster response. According to World Bank figures from the 1990s, €1 invested in DRR saves €4 to €7 in assistance after a disaster strikes.

“Just last week, Haiti activated hurricane alert and response plans developed through our DIPECHO programmes there. In the neighbouring Dominican Republic, people fled to the safety of the mobile shelters we funded ahead of hurricane Matthew’s landfall on the island,” highlights Virginie André, who heads the EU's regional office for the Caribbean.

There are historical reasons why Latin America and the Caribbean have been leading the way in DRR. A series of major disasters battered the region. “Extreme floods and droughts associated with El Niño ravaged many South American countries in 1982 and 1983.  Then there was the murderous the mudflow of Armero (a Colombian town destroyed by the Nevado del Ruiz stratovolcano eruption, killing 20 000), and Mexico’s massive earthquake (magnitude 8, which killed an estimated 5 000 people) both in 1985," recalls Jocelyn.

"A 1996 European Council regulation (EC No 1257/96) stated that aid shall also comprise operations to prepare for risks or prevent disasters," Jocelyn Lance points out. “We then started integrating DRR systematically in all projects of humanitarian assistance in the region,” Jocelyn Lance adds.

"It's low-budget, but high-impact and saves lives; the trick is to ensure the involvement of local communities, institutions and national and regional authorities, so that best practices are spread all over the territory," he adds.

In La Paz, Bolivia, one such programme developed risk maps and a geodynamic hazard monitoring system. In 2010, the EU's partner Oxfam requested support to evacuate a whole neighbourhood as the early warning systems were triggered. A few days later, a huge landslide destroyed the homes of 5 000 people, but there were no casualties as residents had been shifted to shelters ahead of the catastrophe.

"Including the vulnerable communities from the start of the programme, in the assessment and design phases of a project, is fundamental to capture a realistic picture of the risks and options to prepare people to natural hazards," says Virginie André, EU humanitarian aid.

"Community participation is the cornerstone of building resilience: the ability to cope, adapt and quickly recover from disasters," she adds.

"The EU is a vital partner in the implementation of the Sendai Framework for DRR," says Ricardo Mena, who heads the United Nations Office for Disaster Risk Reduction (UNISDR) office for the Americas. The framework is an agreement which empowers local communities along with State authorities to effectively reduce disaster risk in the next 15-year.

"At a national level, the EU's support allows local offices to coordinate the design, implementation and the monitoring of nation-wide DRR strategies," says Ricardo.

Disasters are increasing not only in numbers but also in severity, due in part to climate change (including El Niño’s influence on extreme floods and droughts) and human factors (such as booming urbanization). Hurricane Matthew is only the latest example that, in the words of Jocelyn Lance, “delivering better humanitarian assistance starts well before the impact of a disaster.