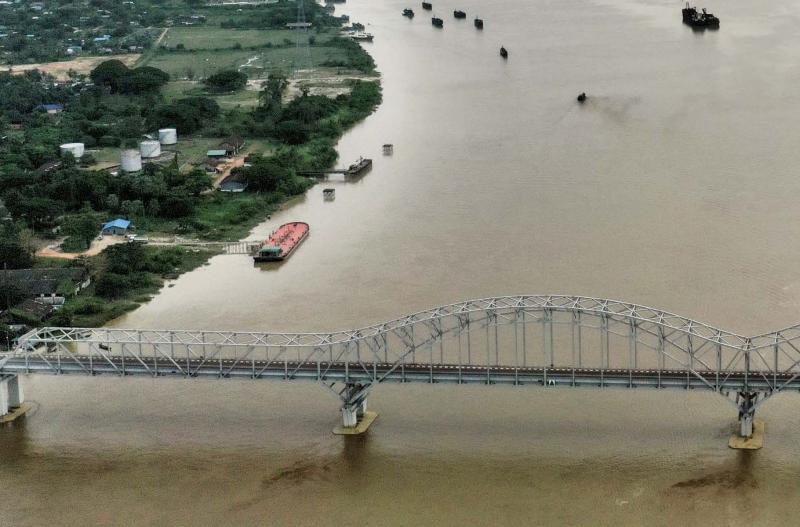 At the mouth of the Thanlwin River where it disgorges into the Andaman sea, sits the city of Mawlamyine, the main trading centre and seaport in south eastern Myanmar. Capital of Mon State, Mawlamyine is the largest city in the state and also the wettest. It is spread over an alluvial floodplain, flanked by the Thanlwin and Attran rivers which are fed in part, by rainfall from the Yankin mountain range to the north and the Taungnyo range to the southeast. During the rainy season between June and October, floods and landslides are common occurrences in the city.

In June 2018, the city received 13.70 inches of rainfall, resulting in the worst flash-floods in 50 years. Over 5,600 people were evacuated from their homes and landslides caused extensive structural damage to the city’s historic Kyeikthalan Pagoda.

The consequences of annual flooding in Mawlamyine have a major impact. Economic damages to infrastructure, lives and livelihoods in the city is significant while rural areas of the municipality are also affected. Farmers suffer heavy losses as floodwaters inundate their fields destroying their crops.

Traditionally local government efforts in disaster management have been focused on emergency response activities. This includes search and rescue efforts when disasters strike; establishing temporary evacuation centers and providing food, clean water and medical care to evacuees forced to flee their homes. Now a greater focus is being placed on scaling up disaster risk reduction (DRR) interventions in the city.

The 2018 floods struck barely a week after the municipal authorities had embarked on an extensive ‘scorecard’ process to rate and assess the city’s levels of disaster resilience. Mawlamyine is one of 20 cities worldwide participating in the Making Cities Sustainable and Resilient Initiative, a project co-lead by the United Nations Office for Disaster Risk Reduction (UNISDR) with funding from the European Commission. Almost 50 people participated in the scorecard process, including representatives from the local, regional and national government, non-governmental organizations and civil society organizations. The direct involvement of the Chief Minister of Mon State was an indication of the high-level political commitment to the process.

Participants recognized that there were many gaps relating to disaster prevention. Some services were duplicated by different agencies, coordination between actors in emergencies was lacking and funding for disaster management activities was insufficient. Overall levels of disaster preparedness could also improve. No preparedness plans were in place, the city lacked a public warning system and there was minimal investment in training.

There were also shortcomings in the city’s disaster response capabilities, such as search and rescue, communicable disease-control and provision of clean water and sanitation. The municipality recognized the need to build its capacity in post-disaster rehabilitation in areas ranging from the processing of temporary housing claims and grants to providing long-term medical care and counselling.

The scorecard process laid the foundation for Mawlamyine’s first Disaster Risk Reduction action plan. One of the first priorities has been to mainstream DRR into the development activities and plans of 16 government agencies including the Departments of Highways, Bridges and Housing. The city is also embarking on the development of multi-hazard maps that include risk scenarios linked to the city’s exposure and vulnerability to certain hazards.

Efforts are also being placed on scaling-up the level of consultation and engagement with the insurance sector with a view to promoting crop and buildings insurance schemes as an effective DRR strategy. In parallel with identifying insurance companies to provide domestic insurance coverage the municipality will also work with insurers to develop policies that cover the assets and infrastructure of government entities, private companies and NGO’s. Steps will also be taken to establish crop insurance to reduce the losses faced by farmers.

Greater focus will also be placed on ensuring that Mawlamyine has sufficient critical infrastructure that enables the city to continue functioning in the event of a disaster.

‘Work has begun on upgrading the water supply system and installing pumps to ensure local residents have an uninterrupted water supply even when floodwaters rise very high’, explains Tejas Patnaik, from UNISDR’s Asia Pacific office, who worked closely with Mawlamyine municipality on the development of their action plan.

Investments will also be made in maintaining natural buffers and ecosystems that safeguard the city. These include planting mangrove forests to protect coastal areas from storms and tidal surges. Tree-planting programmes will prevent deforestation and curb soil erosion. Natural reservoirs and flood retention ponds will be maintained and upgraded to support flood control measures. Agreements will also be forged with adjacent cities to ensure the protection of trans-boundary ecosystems.

The municipality is making a big investment to improve drainage systems and irrigation channels around flood prone areas of the city. This goes hand in hand with changing people’s behaviours.

The municipality is adopting an approach based on social connectedness and a culture of mutual help within and between communities. Community level awareness on DRR and climate change adaptation measures will be carried out alongside the development of education and awareness materials that will be promoted through different channels including newspapers and television. Plans are also in place to develop a Mobile App that facilitates the sharing of disaster related information with the public. Under the DRR action plan, village level disaster management committees will also be established.

‘Local people know what risks their community might be exposed to and what their capacity is to withstand certain threats,’ says Mr. Patnaik. ‘They can have a positive influence on DRR planning by serving as a link with the municipality. They will also act as first responders when disasters strike in their communities’.

Ambitious plans are also in place to install an early warning system for Mawlamyineand to construct a fully equipped Emergency Operations Centre along with multipurpose shelters where people can evacuate to in the event of floods or cyclones.