Climate change threatens all industries with storms, wildfires, droughts, heat waves and rising seas, and the energy industry has no special standing.

Pacific Gas & Electric Company declared bankruptcy following the fierce wildfires that tore through Northern California in November, and other power companies in places as diverse as the New York metropolitan region and Bangladesh prepare. The three researchers call for a resilience-focused approach: hardening power systems, anticipating climate risks to any plans and investments, and relying on state-of-the-art technologies for adaptation. The power industry is large, complex and essential, and the writers urge equal attention on mitigation and adaptation.

By Debabrata Chattopadhyay, adjunct professor of University of Queensland, Australia; Morgan D. Bazilian, professor of public policy and director of the Payne Institute at the Colorado School of Mines; and Mohar Chattopadhyay, NASA Goddard Space Flight Center, GSFC/GMAO and Science System and Application Inc, and a lead research scientist with SSAI

The Pacific Gas & Electricity Company, a major US utility, filed for bankruptcy months after wildfires whipped through Northern California, killing 86. The company confronts numerous lawsuits and more than $50 billion in liabilities even as the Camp Fire remains under investigation. The scale of risks now facing utilities demand new ways of planning future power systems and addressing resilience.

Climate change threatens far-reaching impacts on power system design, markets and operation. These can range from short-term damage from increasing frequency and severity of storms to prolonged crises such as rising temperatures and an associated drop in hydro availability. A 2015 study found that “severe weather caused approximately 80% of the large-scale power outages from 2003 to 2012.” Planners and operators of power systems have historically quantified extreme weather events through various metrics of reliability such as the duration and frequency of outages. Growing evidence now suggests the entire energy supply chain, particularly power generation transmission and distribution, is vulnerable to climate change and disaster events. A new resilience-focused approach is thus required.

To put matters into context, the 2013 Intergovernmental Panel on Climate Change AR5 report for policymakers pointed out that the period from 1983 to 2012 was the warmest during the last 1,400 years in the Northern Hemisphere. The average combined land and ocean surface temperature shows a warming trend in almost every part of the globe as revealed by changing precipitation patterns and melting glaciers and ice, which also impact the hydrological balance of particular regions. Extreme weather and climate events noticed since 1950 include an increase in high temperature extremes, a decrease in low temperature extremes, an increase in the frequency of heavy rainfall events and rising sea levels. The changes in the natural processes can affect energy production, transmission and distribution. Some effects, including extreme precipitation and flooding, might require immediate response, while others like rising sea level will require long-term planning and response. 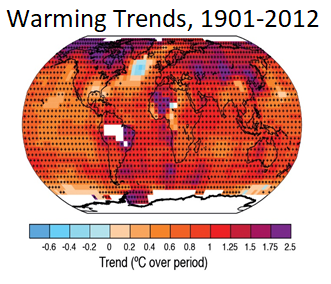 This vulnerability of power systems is characterized by many factors. For instance, higher demand for cooling owing to rising air temperatures can exacerbate the burden. Other factors at play, as detailed by World Bank researchers and others, include increasing water temperatures; uncertain precipitation patterns; changes in river flows with glacial melting, precipitation and more; availability of crops for bioenergy feed stocks; costs and availability of fossil fuels due to melting sea ice and permafrost; efficiency of PV panels, thermoelectric power plants and transmission lines due to rising temperatures; technology downtime due to frequency and intensity of extreme droughts, heat waves, storms and flooding; sea-level rise; changes in wind patterns and intensity; and changes in insolation, or exposure to the sun’s rays. Together, these risks can lead to power outages, increased electricity prices, and increased maintenance and capital costs – along with damaging economic, environmental and public health consequences.

Existing energy infrastructure and future planning for new infrastructure therefore must consider emerging climate and disaster risks on design, construction, operation and maintenance. Also required are systemic changes to the sector’s technical, regulatory and financial standards. Given that most developing countries are in some stage of planning and development of new energy systems, there is an opportunity to avoid future lock-in of infrastructure that is not resilient. There is also a strong need to strengthen existing infrastructure. A recent example is extensive damage caused by hurricanes Irma and Maria to the power grids in the Caribbean islands, especially Barbuda, Dominica and Puerto Rico where the power infrastructure was largely destroyed, leaving the islands without power for months.

Even in developed countries, learning seems to occur via crisis. With heat waves in Australia on the rise, a bushfire took 173 lives in 2009 before regulatory changes were implemented, forcing the use of underground cables in sensitive zones. Likewise, wind turbines were designed to withstand storms only after damage occurred. The obvious need to address resilience has been conspicuously absent in the energy sector. Rather, the sector has been better at reacting and learning from mistakes than intelligently adapting to extreme weather events, although there is little doubt about the increased probability, frequency, intensity and hence impact of such events.

Wetter century: Maps detail observed precipitation changes per year over land from 1901 to 2010, left, and from 1951 to 2010, right, based on Global Precipitation Climatology Centre data sets

For example, New York has painstakingly charted course on a multibillion program to harden its system following superstorm Sandy striking in 2012. Power sector damages in the state approached US$70 billion, which led to power distribution lines placed underground in some areas. Starting in 2013, New York City’s utility Con Edison spent close to a billion dollars on its Fortifying Future Storm program and not long afterward initiated a vulnerability assessment of infrastructure to identify suitable investments for strengthening existing assets and developing resilience measures for new assets. The company claims this has been a wise investment, eliminating 250,000 outages over the last four years. Puerto Rico's Electric Power Authority recently announced a $17.6 billion program over the next 10 years to help its electricity system to withstand 155 mph winds and heavy flooding. Measures include “$5.3 billion for overhead and underground distribution lines; $4.9 billion for overhead and underground transmission lines; $1.7 billion for substation upgrades; $3.1 billion for generating assets; and nearly $1.5 billion for distributed energy resources.”

Developing countries, most likely to be harmed by climate change events, often cannot afford such investments. For example, Bangladesh, with the world’s most densely populated delta, is highly vulnerable to climate change. Regional climate model simulations consistently show increasing annual mean temperatures by 2100, ranging between 2.7°C and 4.7°C, compared with present day. Additionally, all model simulations indicate increasing annual precipitation by 2100 ranging from 8 to 28 percent and suggest that frequency of heavy precipitation events will increase by the century’s end­ – and the country’s power sector is vulnerable to a higher ambient temperature, sea level rise, increased salinity of water resources, drought and frequent flooding. Researchers urge monitoring with improved national standards and infrastructure design, outlined in the master plan, would help improve decision-making, especially in a country like Bangladesh. Location of power stations has faced public opposition owing to environmental concerns, and if climatic factors suggest reconsideration of siting decisions, planners may recommend supply alternatives such as renewables and power imports.

Building resilience to current and uncertain future climate risks in the power sector requires efforts on multiple fronts. To begin, utilities must increase awareness and capacity to identify short- and long-term climate change stressors on power system. Another step is to identify and assess the technical applicability and relevance of resilience-building approaches and how they can be embedded in institutional remits to determine how risks affect different points along the power system chain. Adaptation measures will also vary for planning new infrastructure versus improving existing operations. Adaptation can be: 1) technological including physical protection, better design through improved standards, deployment of new technologies, 2) behavioral, whether investing in improved climate information or reconsidering siting of assets, or 3) structural such as adopting sector-wide policy frameworks and incentives, diversifying the energy mix and developing insurance schemes.

Some cutting-edge technologies such as smart grid, micro grid, wide-area monitoring applications and battery storage, in particular, could improve predictability of disasters and situational awareness as well as enable faster system restoration.

Measures for adaptation do not receive nearly the same attention as mitigation measures in public discourse, international negotiations, or national policy and regulatory design. As a result, adaptation is either marginalized as local concerns or perceived as isolated devastation. Yet adaptation is required for a technical sector that is largely privatized with wide distribution areas, complex from a regulatory and organizational perspective.