Closing the gap between climate information producers and users: assessment of needs and uptake in Senegal 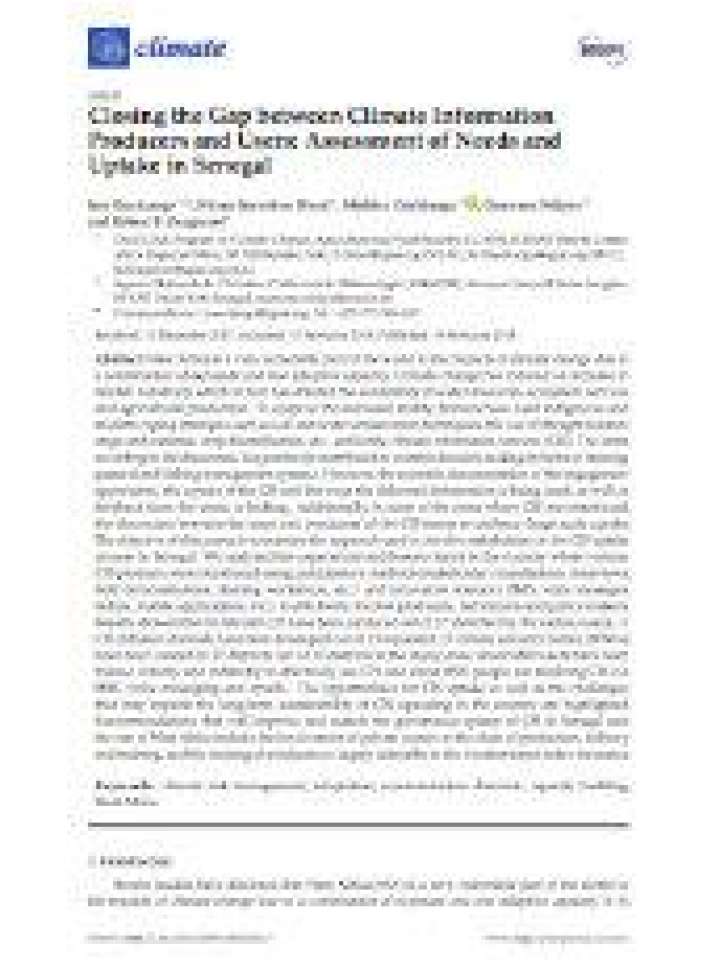 Results showed that 16 relevant CIS have been produced out of 27 identified by the various users; 11 CIS diffusion channels have been developed out of 13 requested; 27 climate advisory bodies (MWGs) have been created in 27 districts out of 30 districts in the study zone; about 6800 users have been trained directly and indirectly to effectively use CIS and about 8500 people are receiving CIS via SMS, voice messaging and emails.

The opportunities for CIS uptake as well as the challenges that may impede the long-term sustainability of CIS upscaling in the country are highlighted. Recommendations that will improve and sustain the governance system of CIS in Senegal and the rest of West Africa include the involvement of private sectors in the chain of production, delivery and training, and the inciting of producers to largely subscribe to the weather-based index insurance.

West Africa is a very vulnerable part of the world to the impacts of climate change due to a combination of exposure and low adaptive capacity. Climate change has induced an increase in rainfall variability which in turn has affected the availability of water resources, ecosystem services and agricultural production. To adapt to the increased aridity, farmers have used indigenous and modern coping strategies such as soil and water conservation techniques, the use of drought-tolerant crops and varieties, crop diversification, etc., and lately, CIS. The latter, according to the discourses, has positively contributed to suitable decision-making in terms of farming, pastoral and fishing management systems. However, the scientific documentation of the engagement approaches, the uptake of the CIS and the ways the delivered information is being used, as well as feedback from the users, is lacking. Additionally, in most of the cases where CIS are introduced, the disconnect between the users and producers of the CIS seems to undercut large-scale uptake.