What does it take to reduce flood and drought risks and build climate resilience in Eastern Africa?

Back in the 1980s, as a science loving kid, I dreamed of a futuristic world full of head-turning, innovative technologies. Indeed, some have come to life: the Internet, mobile phones, and even space travel for private citizens. Yet, there is one unexpected (and unwelcome) development that has become a part of our modern lives: climate change. The pace of global warming is accelerating. This warming continues to intensify the global water cycle, the continuous movement of water within the Earth and its atmosphere, causing changes in rainfall patterns, associated floods, and even droughts.

In Sub-Saharan Africa, climate impacts are especially prominent. For the 11 countries that share the Nile basin – the area of land from which all the water flows into the Nile River – an uptick in hotter temperatures and fluctuating rainfall are contributing to increasing natural disasters  that have severely impacted many populations: 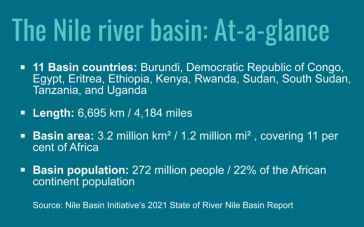 Although the damage statistics of these disasters are not aggregated specifically for the Nile basin, it is evident from these cases that the basin is prone to both floods and droughts.

Floods and droughts also devastate agricultural cultivation cycles, as well as a farmer’s ability to manage livestock herds – all causing prolonged, vicious cycles of poverty.  During my field survey work in Sudan, I noticed that most of the farmers I met were making major efforts to secure water for their crops, while also protecting their land from floods.

In the Nile basin, floods and droughts occur regionally and are transboundary in nature. Most drought episodes, for example, affect multiple countries. Intense rainfalls and downpours cumulate and create flood flows that travel and cross borders.

A dynamic regional cooperation to reduce flood and drought devastation

Building climate resilience among these Nile basin countries calls for a regional effort to accurately predict floods and droughts  , as well as capacity building to plan and implement measures to mitigate these high stakes risks. To achieve this, the World Bank’s Nile Cooperation for Climate Resilience (NCCR) Project is supporting regional organizations to put in place basin-wide flood and drought forecasting systems, as well as providing guidance to government officials on their flood and drought risk mitigation investment planning. This project is funded by the Cooperation in International Waters in Africa (CIWA), a multi-donor trust fund that provides technical support and analysis on effective transboundary water resources management.

The Nile Basin Initiative (NBI) – a partnership among the Nile basin countries that seeks to sustainably develop and manage the Nile river basin in a cooperative manner– plays a strategic role in providing advanced information services such as flood and drought forecasts to all its member countries. This builds on the previous World Bank project that supported the NBI through the CIWA, which succeeded in enhancing the Flood Forecast and Early Warning System (FFEWS) of NBI’s Eastern Nile Technical Regional Office (ENTRO). The project also developed an online pilot drought forecast dashboard that covered the Eastern Nile countries. The improved FFEWS played a significant role in predicting the Nile flow levels during the historic 2020 Sudan flood. Since 2021, the pilot drought dashboard has disseminated drought forecast bulletins to national focal points. Both web-based dashboards are now in the process of being consolidated into the Integrated Knowledge Portal, NBI’s new one-stop data service portal.

“The project will help these Nile river basin countries prepare for and adapt to climatic events that disproportionately affect at-risk and poor populations in and around the Nile river basin  , which will empower them to have a greater sense of well-being, safety, and resilience.” - Erwin De Nys, CIWA Program Manager

Moving forward, the regional information service provided by the NBI has the potential to create synergies with numerous ongoing and pipeline investments for the agriculture sector, livelihood improvement, and other areas. Additionally, the NBI-led knowledge sharing and capacity building programs will foster trust and even more engagement among the Nile Basin countries. And all this has me smiling wide – even wider than when I first read about the advent of electric cars.