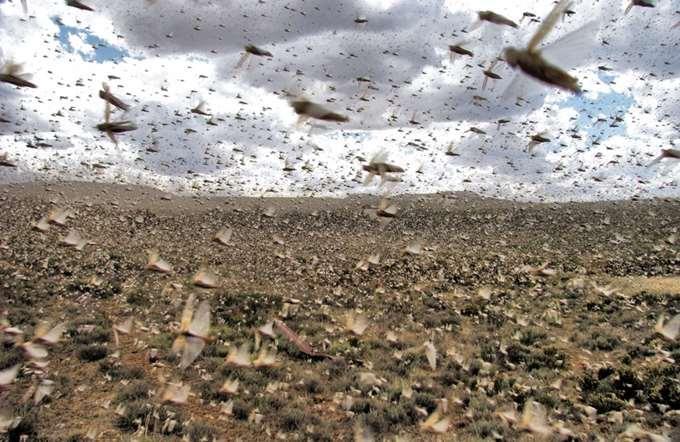 The impact on the region's food supply could be enormous - a locust swarm of a square kilometre is able to eat the same amount of food in one day as 35,000 people

The United Nations is to test drones equipped with mapping sensors and atomizers to spray pesticides in parts of east Africa battling an invasion of desert locusts that are ravaging crops and exacerbating a hunger crisis.

Hundreds of millions of the voracious insects have swept across Ethiopia, Somalia and Kenya in what the U.N. has called the worst outbreak in a quarter of a century, with Uganda, Eritrea and Djibouti also affected.

Authorities in those countries are already carrying out aerial spraying of pesticides, but experts say the scale of the infestation is beyond local capacity as desert locusts can travel up to 150 km (95 miles) in a day.

They threaten to increase food shortages in a region where up to 25 million people are reeling from three consecutive years of droughts and floods, say aid agencies.

Keith Cressman, senior locust forecasting officer at the U.N. Food and Agriculture Organization (FAO), said specially developed prototypes would be tested that can detect swarms via special sensors and adapt their speed and height accordingly.

"Nobody's ever done this with desert locusts before. So we have no proven methodology for using drones for spraying on locusts," said Cressman.

"There are already small atomizer sprayers made for drones. But with locusts, we just don't know how high and how fast to fly."

The swarms - one reportedly measuring 40 km by 60 km - have already devoured tens of thousands of hectares of crops, such as maize, sorghum and teff, and ravaged pasture for livestock.

By June, the fast-breeding locusts could grow by 500 times and move into South Sudan.

The impact on the region's food supply could be enormous - a locust swarm of a square kilometre is able to eat the same amount of food in one day as 35,000 people, says the FAO.

Climate scientists say global warming may be behind the current infestations, which have also hit parts of Iran, India and Pakistan.

Warmer seas have resulted in a rise in the frequency of cyclones in the Indian Ocean. This caused heavy downpours along the Arabian peninsula, creating ideal conditions for locust breeding in the deserts of Oman, Yemen and Saudi Arabia.

Officials in Kenya say drones could play an important role given the limited number of aircraft.

"Every county wants an aircraft, but we have only have five at the moment and they can only be in one location at one time," said David Mwangi, head of plant protection at Kenya's ministry of agriculture.

"We have not used drones before, but I think it's worth testing them as they could help."

Existing drone models are restricted in terms of the volumes they can carry and the distances they can cover due to their size and limited battery life, say entomologists and plant protection researchers.

Another challenge for drone use in such emergencies is the lack of regulation. Many east African countries are still in the early stages of drafting laws, prohibiting usage unless in exceptional circumstances and with strict approvals.

That makes it harder to deploy larger drones, which have petrol-powered engines capable of carrying tanks of up to 1,500 litres and travelling distances of up to 500 km, and often require special approval.

Drones can also be used in the aftermath of an infestation.

"The other use case for drones is in post disaster mapping," said Kush Gadhia from Astral Aerial Solutions, a Kenyan firm that seeks to use drones to address development challenges.

"Governments need to know the extent of the damage afterwards. Combining larger satellite maps with smaller drone maps - which provide higher resolution images - will give more accurate assessments on the extent crop loss and health."