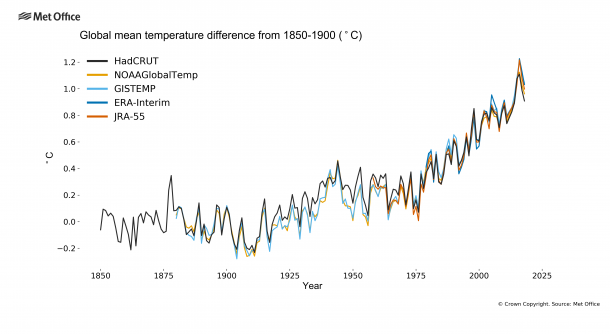 High quality data underpins scientists’ growing understanding of our climate. The World Meteorological Organization has therefore created a WMO Catalogue for Climate Data as a trustworthy source of internationally recognized datasets. It has also reinforced its support for historical weather stations which contain records which are vital for monitoring long-term climate change.

The World Meteorological Congress approved a resolution on the WMO Catalogue for Climate Data, bringing to fruition four years of work by the WMO Commission for Climatology. The datasets have been assessed through an internationally agreed maturity evaluation process. An initial 18 global climate datasets have been so far submitted by international domain Subject Matter Experts (SMEs) and assessed.

The content of the catalogue is expected to expand quickly in the future with the addition of other global datasets as well as regional and national climate datasets.

“The climate is changing and data are helping address many challenges of adaptation and mitigation, including the socio-economic implications of this change,” said Maxx Dilley, Director of WMO’s Climate Prediction and Adaptation Branch.

“Decision-makers need reliable data products like statistical analyses, model outputs, observational data products, and climate predictions and projections. This WMO catalogue guarantees that the data and the resulting product can be trusted,” he said.

In a separate move, the World Meteorological Congress recognized the importance of centennial observing stations that have been observing the weather for more than 100 years.

“2015, 2016, 2017 and 2018 have been confirmed as the four warmest years on record globally. Without long-term observations, it would not be possible to confirm that the Earth has warmed significantly over the past century,” WMO Deputy-Secretary General Elena Manaenkova said during a ceremony to hand-over recognition certificates for 23 centennial observing stations.

Maintaining observing stations for 100 years or more is a major challenge. Unfortunately, too many old weather stations are being closed because of budget constraints or urban development. WMO has therefore created the Centennial Observing Stations initiative to raise awareness of this issue and to encourage governments everywhere to protect and maintain these vital scientific records.

So far, WMO has recognized 140 centennial stations from 47 countries representing all continents, more nominations are expected in the future.

New report demonstrates how Earth observation data can help to measure the Sendai Framework for DRR.

Using climate data: a primer to inform the use of climate data in financial institutions, businesses and governments