In 2015, a massive landslide plunged more than 50 million cubic meters of debris into Alaska’s remote Taan Fiord, a finger of Icy Bay in front of the tidewater Tyndall Glacier. The rockfall sent water almost 200 meters up the other side of the inlet—more than triple the height of Japan’s devastating 2011 tsunami. No one was hurt, but the Taan Fiord landslide and tsunami provided an ideal opportunity for scientists to study such events, which are likely to grow more frequent as glaciers retreat. Glacial retreat removes the support for the base of fjord walls, which makes them more likely to landslide.

Historically, landslides that begin on land and fall into oceans or fjords—also known as subaerial-to-submarine landslides—are rare. Big waves result when they do occur: Subaerial-to-submarine landslides were responsible for all 10 of the highest tsunami run-ups on record. In 1958, for example, a 7.8 magnitude earthquake in Lituya Bay, Alaska, triggered a rockfall into a fjord. The resulting splash caused the world’s highest tsunami run-up, reaching more than 500 meters above sea level—higher than many skyscrapers.

Most of the big landslide-triggered tsunamis occurred more than 60 years ago, before scientists were systematically tracking them. So when the 2015 Taan Fiord landslide occurred, scientists flocked to study its impacts. In their new study, Haeussler et al. used sonar and seismic data to make underwater 3-D maps of the fjord and compare them to similar maps produced before the slide. 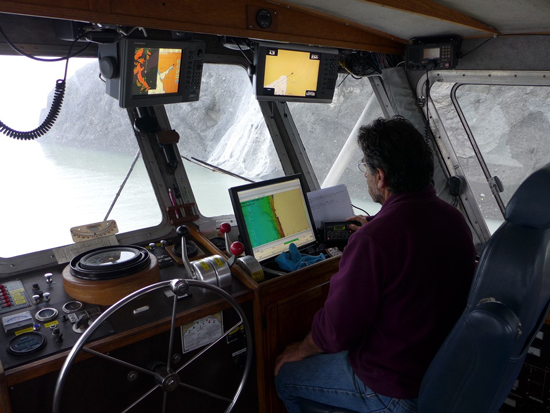 Within a stone's throw of the steep shoreline, the USGS research vessel Alaskan Gyre collects multibeam bathymetry data above the Taan Fiord landslide. Note the upper right chart plotter screen shows the vessel on land in the center of the screen. This area had not had a proper bathymetric survey since deglaciation about 30 years ago. Credit: Peter Haeussler/USGS/Public Domain

The team was able to account for the different parts of the landslide deposit. The initial landslide was about 76 million cubic meters. About 50 million cubic meters entered the water, but that amount had the energy to dislodge an additional 100 million cubic meters of underwater debris. Large, angular, block-like deposits up to 45 meters thick marked where the slide had occurred, including one large chunk that the team dubbed “Edgar,” which was transported 1.5 kilometers underwater all the way across the fjord and then deposited on land. Thick layers of deposited sediment called megaturbidites settled on the fjord floor minutes to days after the landslide, and underwater signs of the slide could be found as far as 6 kilometers away, they report.

Such signatures could help researchers identify where other subaerial-to-submarine landslides have occurred in the past, the researchers say. They also provide a valuable reference point for scientists modeling how landslides loosened by melting glaciers will cause tsunamis in the future.