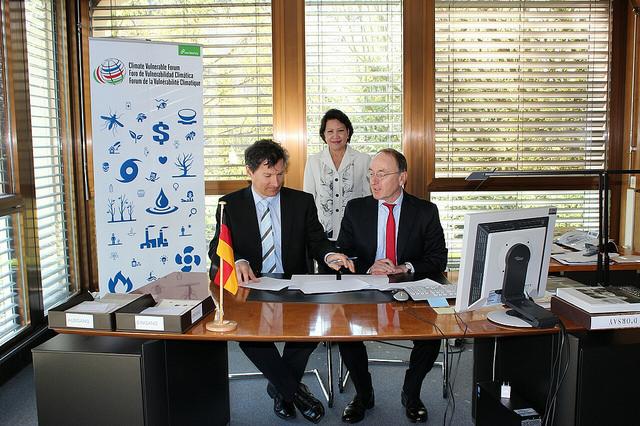 “The reports underscore just how much difference even half a degree of additional heat makes for people’s lives, for working conditions and for the movement of people. How can we possibly subscribe to more than double current warming given what less than 1 °C has entailed? When we see that warming emissions from the energy sector actually stalled last year despite economic growth, or if we look at the unpredictable pace of low-carbon tech uptake, arguments not to strengthen our aims start to wear thin,” commented Secretary of the Philippines Climate Change Commission, H.E. Mary Ann Lucille L. Sering.

The reports, produced by leading experts and scientists, emphasize the risks of allowing the increase of global temperatures to reach as high as 2 °C and connect climate change to human rights, the workplace and migration. Each report addresses information gaps under the UN climate convention’s 2013-2015 Review of the current internationally agreed goal to limit the rise in temperatures to not more than 2 °C.

The 20-page report dealing with the effects of climate change on human rights examines the potential implications for the endangerment of fundamental rights under the current 2.0° C goal. The UN Special Rapporteur for Human Rights and the Environment, Prof. John Knox, who led its production stated: “Even moving from one to two degrees of warming negatively affects the full enjoyment of a wide range of human rights. It also makes it correspondingly more difficult for States to fulfill their obligations under international law to respect, protect and promote human rights.”

In the report on labour, a group of scientists at the Ruby Coast Research Centre outlined the profound adverse consequences of extreme heat resulting from climate change on work, human performance, daily life, and the economy for large parts of the world.

Heading the labour study Prof. Tord Kjellstrom pointed out that: “Extensive research in occupational science teaches us how essential thermal conditions in the workplace are to output and health. Policymakers need to be made aware, in particular, of the significant negative repercussions of more hot hours and hot days on workforce productivity and therefore also GDP. Going up from 1.5 to 2.0 °C actually doubles impacts of this type. Tropical countries are worst affected, including most of the member states of the Climate Vulnerable Forum.”

Qualifying human mobility as a key factor for consideration of a lower temperature goal, the migration and displacement discussion paper was produced by the Nansen Initiative, a bottom-up international consultative process on displacement in the context of disasters and climate change, led by the Governments of Switzerland and Norway.

“The effects of climate change on human mobility are a global reality that keeps growing in complexity and proportion. States we have consulted systematically emphasize the need to respond now and prepare for the future. Based on IPCC reports, we know that higher temperatures will increase the frequency and intensity of disasters and raise sea levels, putting coastal cities and urban housing at risk, and leading to more displacement with devastating consequences for communities. This challenge has to be considered when reviewing the 2° C goal”, said Prof. Walter Kaelin, Envoy of the Chairmanship of the Nansen Initiative and former Representative of the UN Secretary-General on the Human Rights of Internally Displaced Persons.

The three expert reports were solicited by the Climate Vulnerable Forum specifically to inform decision-making on the 2 °C goal by the 196 parties to the UN’s climate convention. The Forum’s submission called for an opportunity for states to interact with these experts and consider other new information in an additional session later this year but prior to the Paris summit where a decision on whether or not to strengthen the present goal will be taken, including in respect of 1.5 °C.

“It is less well-known that at the COP 21 – the Paris climate summit at the end of this year – governments must also take a decision on whether limiting the increase in the temperature to less than 2 degrees is adequate. Meeting that goal is central to much of what is already in place and what more is hoped to figure in a future Paris agreement applicable to major economies and small nations alike. If governments decide a more stringent limit is now needed because of the Review, including these studies, this will imply greater efforts by all across the board,” said Neil Buhne, Director of the United Nations Development Programme’s (UNDP) Geneva office, a Climate Vulnerable Forum partner.

In March 2015, a statement issued for the Forum by Philippines following the devastation of member country Vanuatu by Super Cyclone Pam drew attention to dangers already entailed by human interference with the climate, emphasizing that limiting global warming to 1.5 degrees Celsius would help prevent unmanageable suffering and devastation.

The expert reports are available online at: http://www.thecvf.org/press

The effects of climate change on the full enjoyment of human rights by John Knox, UN Special Rapporteur for Human Rights and the Environment

Text contribution to the Climate Vulnerable Forum, as requested by Cecilia B Rebong, Permanent Representative, Philippine Mission to the United Nations,15 April 20

Discussion paper on the relationship between climate change and human mobility by Professor Walter Kaelin, Envoy of the Chairmanship of the Nansen Initiative, 27 April 20

More on the Nansen Initiative