USA: Experts: Gov't should work to lessen natural disaster losses, not insure them

There are two sides of the coin when dealing with potential residential losses from more frequent natural disasters in coming years – trying to prevent those losses in the first place, and insuring them if and when they do occur. Federal and state governments can help with the former but should largely refrain from the latter, according to a Zillow survey of economists and real estate experts.

Panelists were asked for their opinions of different approaches to insuring and mitigating the impact of natural disasters; to offer their expectations for home value growth over the next five years; and for their expectations around the impact of a spate of expected 2019 IPOs on the Bay Area housing market. The Zillow Home Price Expectations Survey is a quarterly survey of more than 100 real estate experts and economists, sponsored by Zillow and conducted by Pulsenomics.

More than two-thirds of panelists (68 percent) said they agreed with the statement that “the government should not underwrite or subsidize property loss insurance – especially not in high-risk areas.” Similarly, less than half (42 percent) of respondents said they agreed that federal/state governments should require all homeowners in high-risk areas to carry insurance for natural disaster losses.

“I think there is a role for government in the disaster insurance market, particularly in zones of some risk or as a backstop to private insurance,” said one panelist. “But subsidizing building in high-risk zones by providing cheap insurance is not one of them.”

Instead, for those homeowners in high-risk areas that can’t find coverage and/or can’t afford higher premiums, a large plurality (47 percent) of the panel suggested a direct, if difficult, alternative: Those homeowners should sell their homes and move to a lower-risk/more-affordable place. Given the high expenses associated with moving, this would be particularly challenging for lower-income Americans who live in high-risk areas. 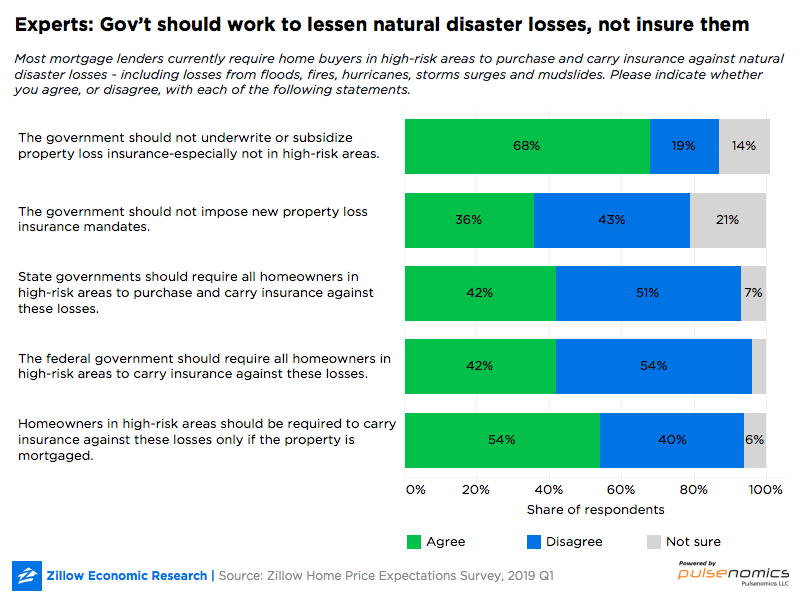 But the experts were more supportive of pre-emptive policies designed to prevent or mitigate damage in the event of extreme natural disasters, including floods, fires, landslides and storms:

2019 IPOs will have a modest impact on Bay Area housing

Over the past several years, California’s Bay Area – largely encompassing the San Francisco and San Jose, Calif., metro areas – has been among the nation’s hottest housing markets. But while home value appreciation there remains robust, it slowed considerably in 2018 – from an annual pace of 8 percent to 7 percent in San Francisco, and from 16.8 percent to 9.9 percent in San Jose.

But a number of local tech firms – including Uber, Lyft, Airbnb and Slack – are preparing to go public this year, which could inject a lot of wealth into the area as employees cash in on long-held equity. Many of those employees may choose to purchase homes, which may impact the local housing market – as has happened in the past following large IPOs. Given this, panelists were asked to offer their expectations of the impact of these IPOs on the Bay Area real estate market.