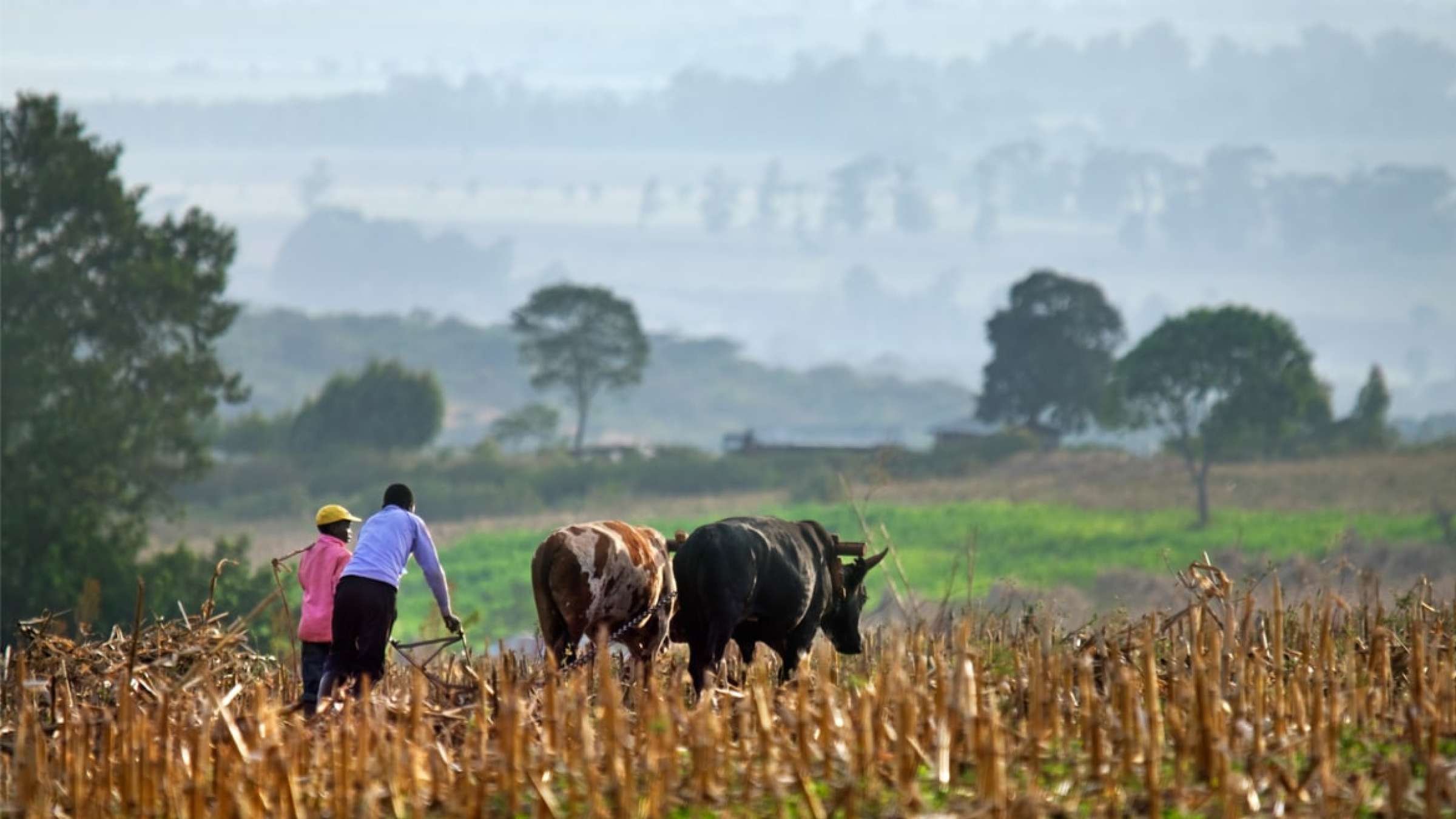 Initiatives to build the resilience of vulnerable people living on the frontlines of climate change are growing worldwide, but they are often disjointed, small and short-term.

KITUI, Kenya - When drought ravaged her sorghum and bean crops five years ago,  Kenyan farmer Ngina Kyalo did not need to stand in line for food handouts, as in previous years when the rains failed.

Instead, she received a payout of 12,000 Kenyan shillings ($105.50) after enrolling in a crop insurance scheme for farmers grappling with recurring droughts linked to a warming climate.

"I used the payout to buy food, pay school fees and buy some seeds," said the mother-of-four, who lives in Muselele village in the southern county of Kitui.

"When there were droughts before, we would get a little food aid and the children would just sit at home for months until we could get the money to send them to school," added the 38-year-old, who cultivates three acres (1.2 hectares).

Run by the World Food Programme (WFP), the United Nations' food aid agency, the insurance scheme is one of a growing number of initiatives across the globe aimed at helping vulnerable communities cope with the worsening impacts of global warming.

On Monday, a key science report from the Intergovernmental Panel on Climate Change warned of growing pressure on food production and people's ability to get enough to eat on a hotter planet, which it said would fuel malnutrition, especially in vulnerable regions like sub-Saharan Africa.

But it also pointed to various ways farmers can protect their business even as weather and climate extremes worsen.

But climate experts say such initiatives in isolation are not enough to solve the problems facing farmers - especially in regions such as the Horn of Africa, where increasingly erratic weather is leaving millions facing severe hunger every year.

"To really make headway on drought stress, but also on floods and other risks, we need to throw all the tools we have at it ... jointly and in a smart way," said Swenja Surminski, head of adaptation research at the London-based Grantham Research Institute on Climate Change and the Environment.

"That's unfortunately why pretty much all the projects at the moment are failing - because we're ... playing around with one tool at a time."

East Africa is one of the most vulnerable regions to climate change, with countries such as Kenya, Ethiopia and Somalia regularly experiencing unpredictable weather, from long dry spells to torrential rains.

In 2020-21, desert locust swarms linked to warming seas and heavy rainfall ravaged crops in the worst attack in 25 years.

Now the region is experiencing the driest conditions recorded since 1981, after the failure of three consecutive rainy seasons. That has left more than 13 million people across the three countries on the brink of extreme hunger, says the WFP.

In Kenya, where 2.8 million people are affected, the signs are evident in semi-arid counties such as Kitui.

Rivers have dried up and fields are full of yellow, wilted stalks of maize. Villagers trek longer distances in search of water and farmers, who rely on rain-fed agriculture, are selling off livestock to make ends meet.

"In the last 10 years, I have noticed a lot of changes in the weather," said farmer Rose Katunga, 40, at her 1.5-acre plot in Muselele where she grows cowpea, pigeon pea and sorghum. "There is more heat, less rain. It makes it difficult to farm."

The WFP-led insurance scheme has helped 12,000 households in Kitui as well as two other counties - Makueni and Taita Taveta - improve their food security, with many now less dependent on food aid than in previous years.

First, farmers get cash or food in exchange for building water pans to harvest rainfall, terracing land to maximise its use and constructing "zai pits" or shallow pools to conserve water.

This helps boost crop yields and also qualifies the farmers for insurance coverage, for which they pay a premium of 300 shillings per acre each season.

In addition, they form village savings and loans groups to pool their money and lend it to members who pay interest.

That has helped communities who are too poor or remote to access regular banking services to obtain credit, providing a cushion when harvests fail or capital to invest in other activities like a small shop or goat-rearing.

But even such innovative approaches to climate adaptation have limitations - and could take years to become sustainable.

Selling insurance policies, for example, is time-consuming as many poor farmers are financially illiterate and struggle to trust abstract products whose payout terms are unclear to them.

Insurance premiums for such farmers are often highly subsidised. In the WFP project, 85% of the total seasonal 2,000-shilling premium is paid by donors.

Without this support, farmers told the Thomson Reuters Foundation they could not afford the premiums, highlighting concerns over the long-term viability if external funding were suddenly withdrawn.

Other challenges include insurance firms covering just a limited number of drought-hardy crops such as sorghum, green gram, pigeon pea and cowpea, and only for the annual long rainy season, as yields are larger compared to the short rainy season.

Paula Jarzabkowski of the University of Queensland, who specialises in disaster protection, said insurance was key to helping farmers minimise their risk - but may not work if climate shocks like those seen in East Africa become more frequent.

"Insurance is for severe events. They can handle a degree of frequency, but if we are going to have an event every single year, then insurance is just not possible," she said.

"If there is no way to safely grow a crop in that area ... that's a much bigger story."

Caroline Muchai, a policy officer for resilience and food systems at WFP Kenya, said steps were being taken to ensure the R4 programme was sustainable.

For example, each season farmers are expected to increase their premium contributions by $1, aimed at eventually weaning them off subsidies, she said, adding that the savings and loans associations play a crucial role in providing emergency credit.

"To easily have that source of money to be used for food or to invest in an alternative livelihood is essential when you need to counter droughts that are cyclical," she said. "You have to look at all activities and not just zero in on one."