Including sexual and gender minorities in disaster risk reduction 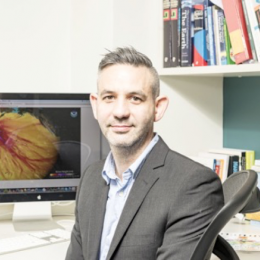 Dale Dominey-Howes is a Geographer whose interests and expertise are in natural hazards, hazard, risk and vulnerability assessment, disaster and emergency management. Dale has completed research projects and consultancies for organisations including the United Nations and The World Bank. He has either led or been a member of multiple post-disaster assessment teams and is Chairman of the UNESCO Post-Disaster Policy and Protocols Working Group (2010 – present) and Advisor to various Australian State and Territory emergency management bodies and agencies.

While the media is largely silent on the experiences and needs of lesbian, gay, bisexual, transgender and intersex (LGBTI) people following disasters, new research shows how disasters tend to exacerbate existing vulnerabilities – especially in places where equal rights and protections for LGBTI people are absent.

For example, following Hurricane Katrina impacting New Orleans, USA in 2005, same sex couples were often spilt up and sent to different evacuation zones because their relationships were not recognised and LGBTI people with children were not recognised as ‘families’ in the way heterosexual people were, and as such, were excluded from receiving government and other forms of aid and recovery assistance. In Haiti following the earthquake in 2010, LGBTI people in evacuation and recovery shelters were the victims of physical, sexual and verbal violence in relation to their gender and sexual identities and were frequently denied recovery services by faith-based organisations charged with the responsibility of providing those services.

Often, government policies are either directly exclusionary/discriminatory or ‘accidentally blind’ by not making reference to the needs of LGBTI people in disaster planning, response and recovery.

In the aftermath of a disaster, LGBTI people do not always feel safe to seek shelter in response and recovery centres. They feel exposed and vulnerable to perceived or actual abuse perpetuated in the close, impersonal, non-private shelter spaces.

Where faith-based organisations provide response and recovery services to communities, LGBTI people can be further victimised after a disaster. These organisations often withhold services from LGBTI people, while some people of faith perpetuate discrimination and hatred in the name of religious teaching.

Breaking down the gender binary approach

Emergency management processes such as shelter registration assume gender binary norms (e.g. gender registration documents that only allow female/male registration), which complicates the experiences of people who don’t fit this definition of gender.

Emergency shelters are very problematic for gender minorities because they only provide ‘female’ and ‘male’ toilets and wash rooms. These binary female/male facilities revictimise transgender, intersex, and genderqueer people (i.e. those who identify as ‘non-binary’, and not exclusively ‘man’ or ‘woman’) and could subject them to harassment or violence.

The Sendai Framework for Disaster Risk Reduction 2015 – 2030 notes that the needs and capacities of different social groups, including minorities, be considered. It rightly focuses on gender and the needs of women and girls, but narrowly considers gender as a binary female/male issue.

Meeting the needs of sexual and gender minorities, which includes LGBTI people, requires the DRR community to more explicitly conceive of and advocate for gender diversity. This means taking a broader perspective on both gender and inclusion.

There are a number of ways to put LGBTI inclusion into action:

Some resources to help

Australia has recently released new national guidelines to help improve LGBTI inclusion in DRR practice. An online training package to broaden the understanding of the impact of being LGBTI in the delivery of effective emergency management services and to assist services to develop strategies to address inequalities is also available as are videos to highlight some of the issues and encourage more LGBTI inclusive DRR.

Accidentally or deliberately excluding LGBTI people in DRR is an infringement of basic human rights and dignity. However, when we account for the specific needs and vulnerabilities of LGBTI people in disaster, we can also harness and learn from one of the LGBTI communities’ key strengths. There is remarkable resilience, social capital and adaptive capacity within LGBTI communities and networks and these can act as ‘models’ that can be employed and deployed by other groups in society. Many LGBTI people build and rely upon ‘families of choice’ and private networks to provide practical, material and emotional support in times of disaster – rather than relying on governmental and community support.

In recent years, enormous advances have been made around the world in terms of thinking about and responding to the needs of girls and women in disasters. It is time to advance that effort to include sexual and gender minorities more broadly.