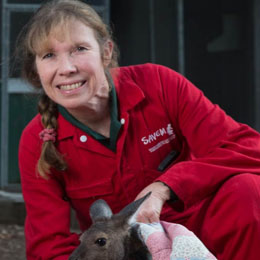 Rachel Westcott is nearing completion of a PhD with the Bushfire and Natural Hazards Cooperative Research Centre in Melbourne, and Western Sydney University in Sydney, Australia, as part of the Managing Animals in Disasters project. She is a veterinarian in private practice, an Emergency Management practitioner and is Coordinator of South Australian Veterinary Emergency Management (SAVEM Inc). A former police officer, Rachel has led veterinary teams in multiple bushfire activations in South Australia. Her PhD research topic is about public health policy and all-hazards preparedness, with a focus on narrowing the awareness-action gap by establishing a culture of ‘routine’ preparedness, thus reducing human mortality and morbidity in all-hazards emergencies.

What comes first? Building DRR by cultivating a preceding culture of preparedness as a ‘social norm’

Climate change is the biggest public health risk of the 21st century, and threatens to adversely affect many aspects of public and environmental health [1, 2]. One which is already well documented is the ‘new normal’ of extreme weather events [3]. Using a ‘Prevention, Preparedness, Response, Recovery’ (PPRR) model of emergency management, which is commonly used in Australia, it is widely acknowledged that prevention and preparedness are areas where we have traditionally been poor, despite the very significant costs of response and recovery [4]. Sophisticated media campaigns by emergency services have escalated in the last decade, but messages of mitigation and preparedness are still inconsistently received in the community across all hazards [5, 6].

Finding new ways to narrow the awareness-preparedness gap is a social imperative given the predicted increase in severe natural hazards [7]. Fear is quite frequently used to attract people’s attention and inspire them to prepare effectively, but the effect of ‘fear appeals’ can plateau and fade [8]. Motivating people to adopt appropriate, safe behaviour is preferred, which is why my research has explored Protection Motivation Theory [9] as a framework to develop and identify practical initiatives to cultivate a culture of preparedness as a routine part of daily life – thus protecting public health and enhancing disaster risk reduction (DRR) [10].

Strategies which embed routine preparedness behaviours were developed from analysis of data contributed by my participant groups – emergency responders and the owners of any kind, and any number, of animals, on South Australia’s Lower Eyre Peninsula – commonly referred to as “the driest state in the driest continent”. Animal owners were selected because they represent a broad cross-section of other demographic groups, and have not been actively researched with respect to their contribution to modern emergency management and DRR [11].

To build a culture of preparedness requires scrutiny of what precedes preparedness messaging and behaviour, so that awareness translates into actions as routine as buying groceries or putting fuel in the car [12]. During data analysis I called the ‘preparedness’ theme: Be fire-fit! Weekly is worth it! – the inference being that to be prepared (fire-fit) regularly (weekly) results in a net benefit (is worth it). By transitioning preparedness behaviour to become a routine part of everyday life, people can become ‘fire-fit’ without consciously expending a great deal of extra time or resources. To be ‘fire-fit’ becomes a social norm that can help save human life, and reduce psychosocial trauma and everything that goes with it (including the massive costs). Below are some recommendations from my research findings.

First, create a new type of workplace leave called Catastrophic Day Leave (or the equivalent local nomenclature), giving employees the ability to trade other leave or overtime specifically for the purpose of putting their survival plans into action. This can be written into individual employee contracts.

Second, give new residents a financial incentive to attend fire-safe seminars by offering a significant discount on their second year’s local municipal taxes. To qualify, attendance can be set at a given number of events over a 12 month period, to allow maximum opportunity for participation.

Third, reward ‘best-practice’ by identifying excellence in property preparedness. This can be achieved by giving rebates on Government or municipal charges, or on insurance premiums, and by using bushfire compliance to value-add to properties at point-of-sale. Community ‘fire-ready’ property open days (similar to ‘open garden’ schemes) and public or civic awards rewarding whole-of-community action embed the value and importance of good preparedness.

Next, review the use of firebreaks on farms and farmlets, perhaps with a by-law. A little shared loss could mean many people are safer, by facilitating back-burning conducted by emergency services during a response. Consider planting more flammable crops, like oil-seeds, further away from valuable infrastructure and assets.

Then, use various social microclimates to advantage by ‘syncing’ multiple sources of synergistic information from schools, the workplace or the family. Dual sources of information brought home to the family by two or more members simultaneously can help strengthen understanding and commitment to embark upon adaptive action.

These strategies aim to promote medium to long term changes to public health and safety policy and preparedness behaviours. Make Catastrophic Day leave an optional, but formal type of workplace leave. Give new people easily accessible fire safety information and reward them for joining in. Publicly acknowledge best practice. Give farmers incentive to put in firebreaks, and think about crop placement, and maximise the potential of multiple social microclimates. Such new straightforward public policies can increase DRR by encouraging fire-fitness as a routine part of daily life.

Cranking up the intensity: climate change and extreme weather events

Promoting community resilience in disasters: the role for schools, youth, and families